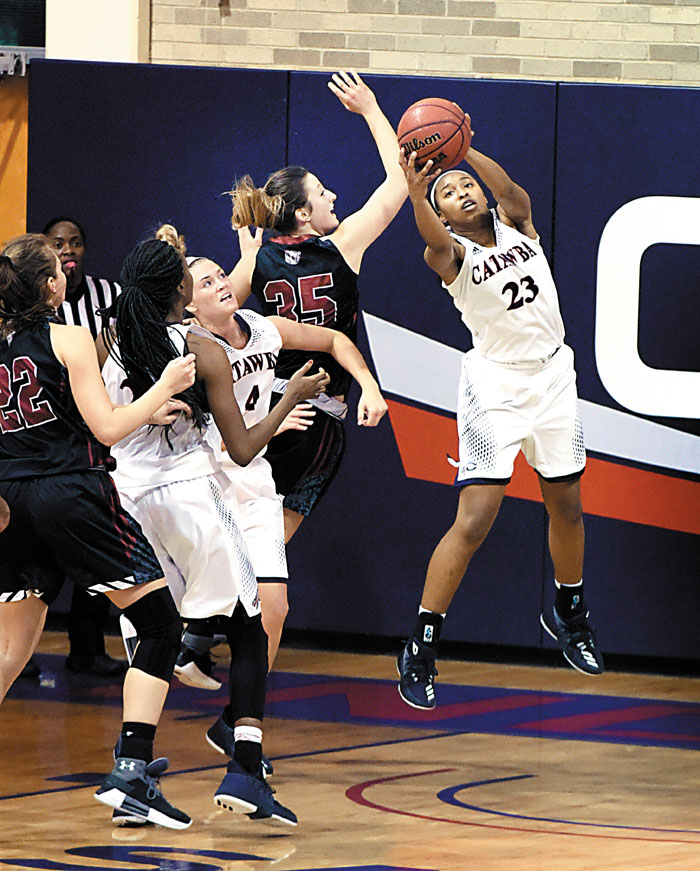 The Bears figured out what was working on Wednesday and handed Catawba a discouraging 61-56 South Atlantic Conference loss at Goodman Gym.

“Our post players were feeling it, so we kept going there,” L-R’s first-year head coach Cameron Sealy said. “The closer to the basket you get, the higher your shooting percentage should be, and we stayed in there pretty close.”

The modestly sized frontcourt players who excelled for the visitors included 5-foot-11 Madi Suddreth (20 points on 10-for-15 shooting), 6-footer Karlie Bearden (11 points) and 5-11 Jackie Denny, who was 3-for-3 from the floor and made the game’s key bucket.

Sometimes it’s not rocket science. L-R shot 1-for-11 from 3-point range, but the Bears filled it up at a 65-percent rate on 2-point attempts. In the fourth quarter, the Bears were 9-for-11 on 2-point shots, accuracy that resulted from a mix of layups and drilled 12-footers.

“I don’t know what to say,” said Catawba star Terri Rogers, who was held to an inefficient 13 points on 5-for-14 shooting.”They were playing in our gym, but they were making everything. And we were shooting like I don’t know what. Just a bad shooting night for us.”

Catawba (12-11, 10-6) was deeper, more athletic, quicker, faster and jumped higher. The Indians slaughtered L-R (13-11, 7-9) on the glass, at times, posting a 37-25 overall advantage and 20-6 dominance in the usually pivotal category of offensive rebounds. But Catawba wasn’t making any shots, so it really didn’t matter if the Indians attempted one, two or three.

“We only got 16 second-chance points when we could’ve gotten 40,” perplexed Catawba coach Angie Morton said. “We shot so poorly, all those offensive rebounds weren’t much of a factor.”

It was a frustrating night for the Indians from the beginning. They got down 7-0 and had to work uphill. They were down as many as nine in the second quarter, but they made it to halftime trailing 28-27 and had to feel like they were still in good shape. Heading to the final eight minutes, the Bears led 41-39.

Catawba opened the fourth quarter with a nice play. Serena Brown, back from a one-game absence due to the flu, grabbed a defensive rebound off a missed L-R 3-pointer and took off. She slipped the ball behind her to Marshauna Butler, who  was  ready to fire from the 3-point line. Butler’s confident 3-ball put the Indians ahead 42-41, the crowd roared, and Catawba appeared to have finally turned momentum.

But that didn’t happen. L-R scored the next eight in a row, including two mid-range  jumpers by Suddreth. The Bears were up 49-42 with 6:19 left. Catawba was in trouble.

Catawba couldn’t make enough shots to catch up. The Indians finished an ugly 3-for-19 from 3-point range (one of those accidentally banked in) and shot 37.3 percent from the floor.

When Catawba is in trouble, when the outside shots aren’t falling, it normally gets the ball to Rogers, but the All-SAC performer was having her struggles in the paint.

“We didn’t really try to limit Rogers’ touches, but we tried to limit her vision when she caught the ball and we tried to make her go through a lot of people,” Sealy said. “She likes to turn and spin, and we tried to always have a body where she wanted to go.”

Catawba scratched and clawed and hustled and somehow stayed in it. L-R’s lead bounced between four and eight points for a long time.

With 42 seconds remaining and the Bears trying to hang on to a 57-53 lead, Cassidy Joyner fed Denny. Denny plays with both knees braced, but she made the layup that put Catawba on the ropes.

“It’s that time of year when you have to make plays if you’re a player,” Sealy said. “We made big shots tonight. We got big rebounds. In the second half, we executed.”

Brown’s deep 3-pointer with 15 seconds left pulled the Indians within 59-56 and gave the home team a glimmer of hope, but Justyce Swango made clinching free throws for the Bears.

It was the third straight loss for Catawba, and the Indians tumbled into fourth place with an unfavorable schedule ahead. The only remaining home game is against first-place Carson-Newman.

“We lost by two at Wingate, but we played OK,” Morton said. ‘Then we lost at Anderson with Serena out with the flu. But tonight’s loss hurts. This was the worst of the three. Serena isn’t all the way back yet, and Madi (Hallman) is playing on one foot, but beyond those two, no excuses.”

Rogers was equally dismayed. Catawba had beaten L-R in Hickory and had beaten the Bears three straight times at Goodman Gym. This was one the Indians clearly believed they should’ve won.

“We just didn’t come ready, and that includes me,” Rogers said.