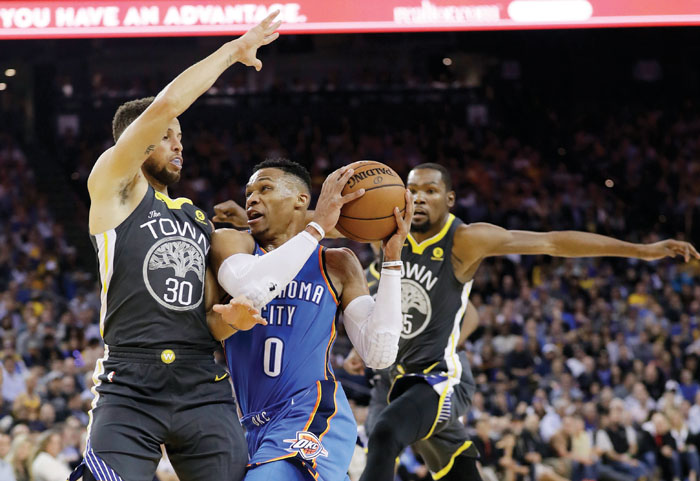 By JANIE McCAULEY, AP Sports Writer
OAKLAND, Calif. (AP) — Paul George and Russell Westbrook ran Stephen Curry, Kevin Durant and the Golden State Warriors right off the floor from the opening tip.
Westbrook had 34 points, nine rebounds and nine assists to get the better of old buddy and teammate Durant, George scored 38 points, and the Oklahoma City Thunder embarrassed the defending champions 125-105 on Tuesday night to snap a four-game losing streak.
Durant scored 33 points but didn’t get as much help from the cold-shooting Splash Brothers of Curry and Klay Thompson, who added 21 and 12 points, respectively. They combined to go 11 of 27 from the floor and 4 for 15 on 3-pointers as the Warriors lost for the third time in four games. They lost their tempers, too — as in five technicals total.
Draymond Green was ejected with 8:13 remaining after a second technical when he argued with the officials.
The sellout crowd went crazy when Durant was called for a foul with 1:35 remaining in the third and replays show that Westbrook had clearly slipped and no contact was made. Warriors owner Joe Lacob tossed his jacket in disgust.
“We were way worse than the officials were,” coach Steve Kerr said. “We got completely outplayed.”
By the 6:32 mark of the fourth quarter and the blowout still in force, fans began leaving the building.
Westbrook shot 13 for 26 and George went 11 of 23 with six 3-pointers.
Carmelo Anthony sprained his right ankle early in the game, but Oklahoma City never slowed down in ending a seven-game skid at Oracle Arena with its first win on the Warriors’ home floor since a 116-97 victory on April 11, 2013.
Westbrook scored 21 points in the first quarter, making nine of his first 10 shots as the Thunder led 42-30. They never trailed.
Golden State had been 11-0 following a loss this season. The Warriors also lost for the first time in seven games when taking on an opponent that had previously beaten them this season, with the Thunder having won 108-91 at OKC on Nov. 22.
This could be a win that turns momentum for Billy Donovan’s Thunder, who had dropped four of five since losing defensive star Andre Roberson to a season-ending ruptured patellar tendon in his left knee.
Durant scored eight straight against his old team during one first-quarter stretch.
Oklahoma City, which allowed 13 3-pointers in losing at home to the Lakers on Sunday, limited the Warriors to 8 for 28 from deep.
“It didn’t feel like us, that’s for sure,” Kerr said. “We’re out of whack right now. We’re just not playing the way we normally do in terms of the ball movement, the pace and the spacing. And our defense has not been good either. It’s been a struggle.”
Green was hit with the Warriors’ third technical of the night at the end of the first half and had to be held back from officials. Meanwhile, Westbrook went down beneath the Thunder basket after crashing into the stanchion.
TIP-INS
Thunder: OKC went 12 of 31 from 3-point range after shooting 8 for 25 on 3s in the first meeting. … Josh Huestis earned his second start of the season after rookie Terrance Ferguson started the previous five. … The Thunder came in forcing 16.3 turnovers per game while averaging 9.31 steals.
Warriors: Golden State had 12 first-half turnovers for 19 Thunder points, 25 turnovers in all. … Thompson became the 28th player in NBA history to make 1,500 career 3s. … Backup C David West returned after missing a game for personal reasons. He also rested Friday at Sacramento so hadn’t played in two straight. He received a technical midway through the second quarter. … Since 2014-15, Golden State is 25-3 playing a team that had won the previous matchup. … Andre Iguodala’s phrase and motto “Black History is Golden” was used for a T-shirt giveaway Tuesday as the Warriors kick off their celebrations of Black History Month.
KERR’S MARK
Kerr coached his 300th regular-season game and remained at 248 victories.
“When you have a lot of talent at the beginning of your coaching career, you can implement things that will work and then you can get credibility with winning and grow as a coach while you are winning and it’s a much easier process that way,” he said. “I was very fortunate to have this job as my first one.”
Irate at the officials, Kerr received a technical at the 9:38 mark of the second quarter.
UP NEXT
Thunder: Visit Lakers on Thursday.
Warriors: Host Dallas on Thursday trying for a 10th straight victory in the series and 11th consecutive at home.
___
More AP NBA: https://apnews.com/tag/NBAbasketball