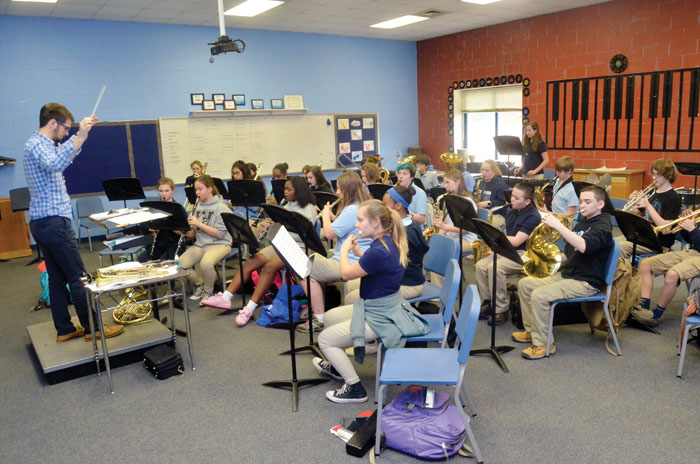 West Rowan Middle School Band Director Nathan Brown works with a group after school as they practice for an upcoming trip to Williamsburg, Va. Parents with the band boosters club are working overtime to raise funds for the trip after a former treasurer was charged last week with embezzling over $14,000 from the bands accounts. Shavonne Walker/Salisbury Post

SALISBURY — The Virginia company sponsoring the West Rowan Middle School band’s trip to Williamsburg has rallied behind the students after a former treasurer with the Band Boosters was charged with embezzling more than $14,000.

Last week, 32-year-old Chantel Reliford was charged with the felony offense after Rowan County authorities said she admitted taking the money from the group’s fundraising account over a six-month period. Investigators said Reliford, who had access to the bank account, took cash, withdrew money, and used a club debit card to make retail and restaurant purchases.

Band director Nathan Bowman, who also had access to the account, gave Reliford checks and cash to deposit throughout the school year. Authorities said Reliford deposited the checks and kept the cash.

The club received an extension to pay for the trip but needs to come up with $9,000 by Sunday. Boosters are looking for ways to raise the money.

After learning about what happened, WorldStrides, the company that is sponsoring the trip, pledged to match the boosters’ contributions two to one.

“These kids have worked hard to fundraise for their trip. When I heard about the situation, I knew that we had to do something to help these students reach their goal,” said CEO Jim Hall.

Hall said the students reflect the essence of WorldStrides OnStage performances and he is confident the band will be at the competition in April.

“We believe that hard work pays off. These students are working hard at honing their craft and will get the opportunity to perform with students from across the country. To watch idly as they miss an opportunity due to unfortunate circumstances would be heartbreaking,” Hall said.

WorldStrides isn’t the only company that has rallied behind the students. Local companies and individuals have pledged or donated money.

The boosters also partnered with Zaxby’s, 1030 W. Jake Alexander Blvd., for Spirit Night from 5 to 8 p.m. Feb. 15. The band will be given a portion of the proceeds from sales during that time, Mitchell said.

A movie/dance night themed “Parents Night Out” is planned this Friday from 5 to 7:30 p.m. and is open to all third- through fifth-graders in the Rowan-Salisbury school system. The event will be held at West Rowan Middle School. Admission is $5, and concessions will be sold. Donations will also be accepted.

Another dance is scheduled from 6 to 8 p.m. Feb. 16 at West Rowan Middle School for sixth- through eighth-graders who attend that school. The cost is $10 and will include dinner.

The school will also have its third annual vendor expo and flea market sale on March 24 at the school.

“The students have handled it very maturely,” Mitchell said.

She said they are all trying to move forward.

Boosters club President Anissa Winn said donations have poured in from former students and even young people. The club received a recent donation from a former West Rowan Middle School band student who is now enrolled in college and from a young girl who gave $5.

Both Mitchell and Winn said any amount donated is appreciated.

As of late Tuesday night, the group’s GoFundMe page had garnered $4,940.

Here are a few other ways to give:

• West Rowan Middle School. Checks can be made out to WRMS Bands, Attention Nathan Bowman, and mailed to 5925 Statesville Blvd., Salisbury, NC 28147.

• Email Mitchell at wrmsbands.vp@gmail.com to learn about other upcoming fundraisers.