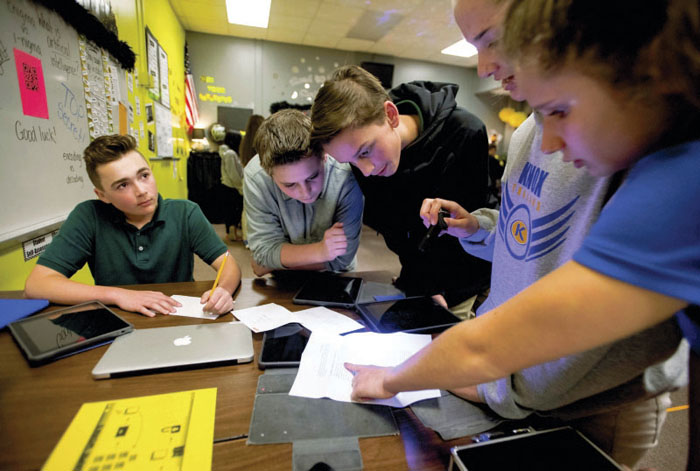 JON C. LAKEY / SALISBURY POST Students work together to become British codebreakers to decipher encrypted messages from Germany. From Left to right. Patrick Holden , from China Grove Middle, Jonathan Moore, from Corriher-Lipe, Ty Hubbard , from China Grove Middle, Natalie Lippard, from Knox Middle and Autumn Walser from Knox Middle School use a "black light" to see hidden message in a printed letter in Jennifer Barbee's classroom. Seventh graders from all of the Rowan-Salisbury middle schools converged on Corriher-Lipe Middle school for a extensive instructional experience on the Holocaust. Wednesday, March 8, 2017, in Landis, N.C.

LANDIS — Last year, seventh-graders from across the district traveled to Corriher-Lipe Middle School to get a snapshot of history.

It was the first year the school held a Holocaust and World War II conference, and organizers Cheryl Lang and Kendall Shue said the program went over well with students.

On March 8, the school will host the conference again, this time catering to more than 1,400 seventh-graders — up from last year’s nearly 1,000 attendees.

While this year’s program will feature some of the same hallmarks — author Alan Gratz discussing his book “Prisoner B-3087” and Holocaust survivor Suly Chenken — there will also be new opportunities and activities.

Last year, the school partnered with Queen’s University’s Greenspon Center for Peace and Social Justice, but this time around Lang and Shue are looking closer to home.

“This year, we’re trying to capitalize on the expertise of our teachers,” Lang said.

Middle school teachers from across the county have been invited to host learning and breakout sessions discussing different aspects of the Holocaust or World War II, including Japanese internment camps and teachers’ reflections on visiting concentration camps.

While the program is not open to the public, Lang and Shue said they want to involve local experts and resources as much as possible.

“This year, we’re trying to utilize our expertise in the area. … We’re casting a wider net,” Lang said.

Students will also have an opportunity to learn about life and culture of the time period with a dance class, a session on Jewish food and culture, listening to a veterans panel, making care packages for current soldiers, studying European immigration following World War II, and learning about proper identification and use of primary source documents.

“We want to make sure for the kids, it’s not too heavy on them,” Shue said.

The conference offers students a chance to delve deeply into a topic that is often more complex and unwieldy than can fit into a history lesson.

“It gives them a chance to learn more about things they touch on in class,” Lang said. “… It’s such a complex subject, and there’s so many variables that went into not just the Holocaust but World War II. It’s not just a cut-and-dry answer.”

The school is still looking for potential speakers and is collecting donations for soldiers’ care packages. Organizers say they hope this will become a long-standing tradition.

“This is definitely unique to this school, so we definitely want to continue that trend,” Principal Justin James said.

Those interested in donating candy, socks or individual tissue packets for care packages should drop off the items at Corriher-Lipe Middle School, 214 W. Rice St., Landis.

Anyone knowledgeable on the Rwandan genocide, Japanese internment camps, or World War II in the Pacific or who was or is related to a World War II camp liberator and who might be interested in presenting at the conference should contact Kendall Shue at Corriher-Lipe, 704-857-7946.