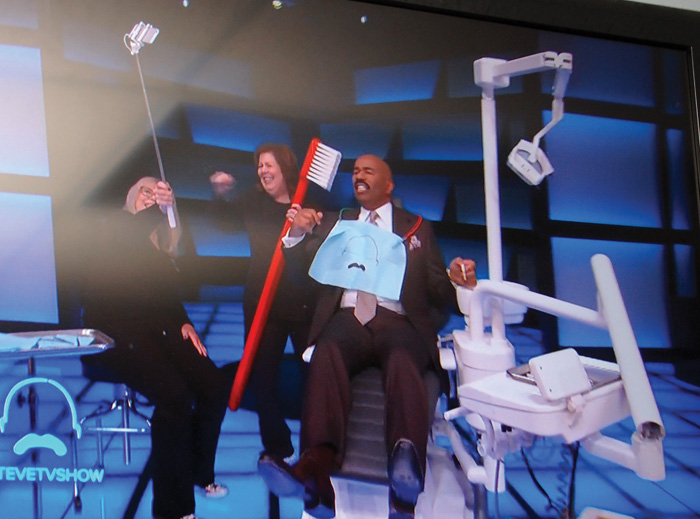 CONCORD — Who knew, but entertainer Steve Harvey is not a big fan of going to the dentist.

Dr. Patricia London, a Concord dentist, and her sister, Tracy London Driver, took a step toward easing Harvey’s fears Wednesday when they appeared on his afternoon television show in Los Angeles.

“It really was as fun as it looked,” Driver said. “… He was just like a real person. I thought he was fantastic.”

Their appearance with Harvey aired locally Wednesday afternoon on WBTV.

The sisters received their invitation to be guests on “Steve” thanks to their widely popular homemade videos from London’s office in Concord. The videos, called “Monday Bites,” have become a YouTube sensation.

A compilation of 32 videos made at the beginning of the year especially went viral, racking up some 39.5 million views worldwide. The videos are almost always done to popular songs, and they usually incorporate Driver, a couple of props, dancing and willing patients.

“(Pat) gives me a lot of freedom,” says Driver, who handles all the office insurance matters and masterminds the videos. “She gave it to me as a job. I said, ‘Well, then, I’m going to be in all of them.”

On “Steve,” London and Driver sat on the couch next to Harvey for a couple of minutes of conversation, then Driver performed briefly in a video with Harvey, as she wielded a giant toothbrush while Harvey was in the dentist’s chair.

“All in all, it was a great experience,” London said, “and meeting Steve Harvey was awesome.”

The sisters discovered that Harvey really does have a fear of the dentist, as he acknowledged during the show.

“All that was genuine,” Driver said.

London said she felt their visit accomplished something with Harvey personally.

“He has promised us he will go (to the dentist),” she said.

Patricia London has been a dentist for 35 years, and her Concord practice also is known as Bright Inspired Dentistry. Both sisters graduated from A.L. Brown High School in Kannapoilis — Pat in 1972; Tracy, in 1979.

They are sisters of Salisbury Post sportswriter Mike London.

The dental office started making the music videos about two and a half years ago. Patricia London had attended a social media conference and learned that a good way to improve Google rankings is to post videos.

At first, she tried to do dental videos with puppets and got maybe 30 views total.

“I thought that was pretty good for a puppet,” Driver told Harvey.

Things changed drastically when she started lip-synching and dancing to popular music and adding other staff members and patients in the videos.

“That’s kind of when it took off,” Driver said.

The compilation this year “went crazy,” Driver said. “It literally went around the world.”

She ticks off places such as Scotland, France, Germany, Japan, Nigeria, Greece and Russia where people have seen the videos or commented on them.

What makes the dental office videos translate in any language, Driver said, is that most everyone shares the experience of going to the dentist, “and I guess music is so universal.”

Some of Driver’s favorite videos have included “Islands in the Stream,” in which she and a patient assumed the singing roles of Dolly Parton and Kenny Rogers, respectively, and “Proud Mary,” when she really got into the dancing.

The videos “have been awesome for the practice,” Driver said, though most everyone in the office has been fielding calls about the videos and possible interviews.

“It’s been a good problem to have,” Driver said.

The “Monday Bites” videos are filmed with an app on Driver’s iPhone. There’s no cost, and many show up on dubsmash.com, Facebook and YouTube. Driver stockpiles a list of songs she thinks will play well as dental office videos.

She looks at the dental appointment schedule to recruit some of the patients, many of whom ask first. “It’s all volunteer,” Driver said. “I always want to have a new face.”

London said she hopes the music videos help people feel better about going to the dentist and make them realize they can have a good dental experience, if they have been fearful.

Harvey’s show flew the sisters from Charlotte to Los Angeles, put them up in separate hotel rooms, and provided cars to and from the LA airport and their hotels.

Driver’s son Nathan drove north from San Diego to see his mom and aunt, and he stayed in the Green Room with them before the show.

Everything happened in three days. They flew to California Monday, taped the show Tuesday and were back home Wednesday in time to see it on television.

“It was definitely a whirlwind trip,” London said.

During their on-air conversation with Harvey, Driver asked the entertainer whether one of their cab drivers was right, that you can’t look Harvey in the eyes. Harvey explained that isn’t the case, and the cab driver must have been referring to an old memo from staff members in Chicago.

Driver made sure to look right at Harvey. She admitted being nervous at first, but Harvey and the audience made the women feel at ease. “I could have stayed out there for an hour,” Driver said.

Dr. London’s office will keep making its music videos, and Driver’s creative side will continue to be in full view.

“She’ll get fired if she stops,” Pat said.

“Unless I go to Hollywood,” Tracy countered.