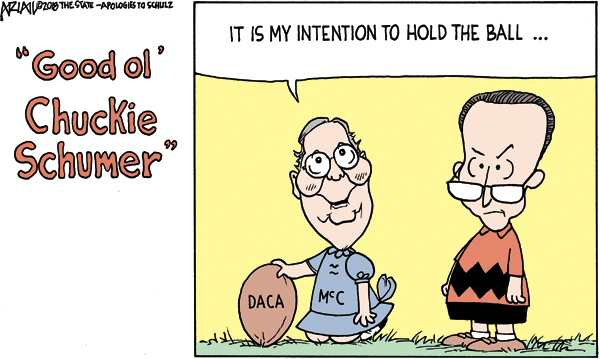 The writer is referring to a political cartoon published Jan. 26 that depicted Mitch McConnell as the “Peanuts” character Lucy, holding a football for Chuck Shumer/Charlie Brown to kick.

I read “Good ol’ Chuckie Schumer” with wonderment. If Schumer wants to hold the ball, I say give it to him and make New York State the DACA capital. Or, wait, let’s send all the illegals to New York and let him, Gov. Mario Cuomo and Michael Bloomberg support them. I know Bloomberg is loaded; he alone can spare $134 billion a year to keep them up and free up the rest of us and our taxpaying citizens.

That’s a good idea. Let’s put that to a vote. We should get about 99 percent of voters out. Can you see New York City? Can Sen. John McCain help? Maybe.