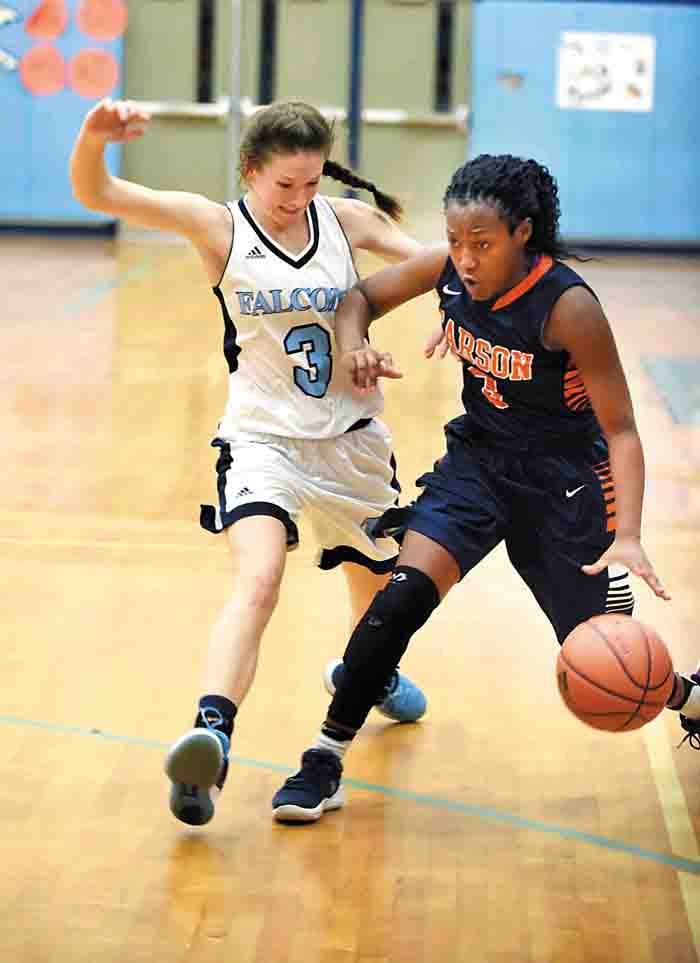 MOUNT ULLA — There is no longer a big picture for the Carson girls basketball team.

Its aim is firmly on the road ahead — and the next game on its quest to win the North Piedmont Conference championship.

“We came into this game in a three-way tie for first place,” coach Brooke Stouder said Tuesday, moments after Carson whipped host West Rowan, 77-57, and remained tied for the league lead with North Iredell. “The important thing for us tonight was not looking ahead and focusing only on this game.”

It worked. The Cougars (20-3, 7-2) overcame an early 16-9 deficit and rolled to their fourth straight win. Senior Olivia Gabriel shot 9-for-19 from the field and scored a season-high 29 points. Teammate McKenzie Gadson had 16 points and six rebounds, while super-soph Abigail Wilson paced all scorers with 30 points for third-place West (17-6, 6-3).

“I was disappointed with their effort,” losing coach Ashley Poole after the Falcons, now 11-2 at home, lost to Carson for the second time in six days. “There were times we didn’t go after rebounds. In the second half, our girls didn’t attack the basket — and that’s our bread-and-butter. We conceded 10-foot jump shots instead of going for the basket.”

Carson took charge of the game in the second quarter, when Gabriel scored 15 points. Her 3-pointer from the right side gave the Cougars their first lead, 24-22, with six minutes left in the half. Gadson followed with a couple of bank shots, Colbie Perry swished a three from the left side and Gabriel closed the half with a pair of floaters down the lane to give Carson a 40-33 halftime advantage.

“My shot has improved,” Gabriel said. “Most teams are forcing me to be a shooter, so I’ve worked hard on it.”

Wilson continued to pour in points in the second half. She hit two free throws a minute-and-a-half into the third period — just seconds after teammate Mary Sobataka beamed in a 3-ball — to draw the Falcons within 40-38. But a 9-2 Carson run, capped by Anne Marie Turney’s 12-foot set shot from the left side, put the Cougars back in control. They maintained a double-digit lead over the final 11 minutes and limited West to eight second-half field goals.

“The last time we played them (Carson’s 69-65 OT win), we didn’t play our best,” said Gadson. “We let them think they could play with us. Tonight, we just ran transition a lot and attacked the gaps. That opened up some easy baskets.”

Wilson matched her season-high and reached 30 points for the third time. Only three West teammates cracked the scoring column.

“We weren’t getting around their bigs in the beginning,” Gabriel said. “Abigail — she can shoot, post up and beat you in a lot of ways. We had to play her honest. Our defense was better in the second half. That really helped. ”