The power of a story: National Geographic explorer uses stories to save lions 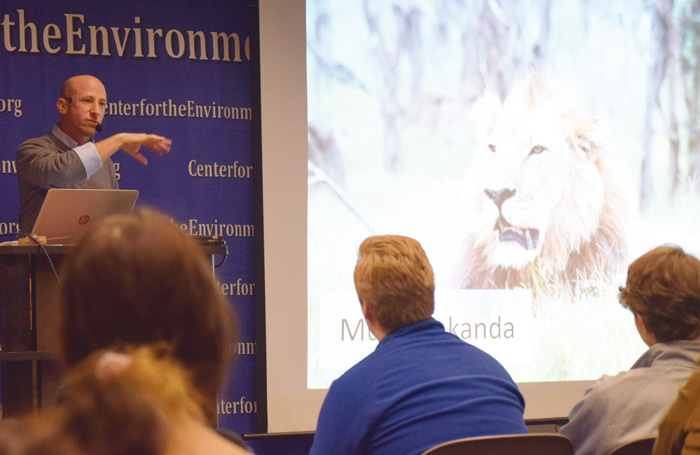 SALISBURY — It was 2013 when Dr. Andrew Stein noticed that something was wrong in the Okavango Delta in northern Botswana.

Stein was a carnivore conservationist working in the region at the time when a colleague brought a long, drawn-out fight between the region’s lions and local people to his attention. In 2013 alone, more than 50 percent of the region’s lions had been killed — most by poison.

“We find the carcasses because they’re normally surrounded by 18 to 20 dead vultures,” Stein told a crowd Monday night at the Center for the Environment at Catawba.

Stein, an assistant professor at Landmark College and a National Geographic Explorer, laid out his years of work in Botswana working to preserve the Okavango’s lions through an unusual method: stories.

African lions have a long history of conflict with humans as the two bump territories and wrestle over livestock. In 2013, the poisonings — which wiped out lionesses, cubs, vultures, hyenas and elephants — followed a rash of livestock deaths to the jaws of the big cats.

“So it’s really this kind of retaliation,” Stein said.

He and others who cared for the tenuous future of the species tried speaking to local villagers, reminding them of laws and threatening punitive action. But the appeals fell on deaf ears.

“We cannot live with lions,” one villager went so far as to say.

It was a reply that got Stein thinking. Everywhere he went, people blamed the lions — leveling the crimes of a few individuals against the entire species. And Stein got an idea: Could a story save the African lion?

Like people, lions are individuals. They have their own territories, mannerisms and preferences.

“Some lions are shy, some are curious, some are aggressive — and some avoid livestock altogether,” Stein said.

So he began a campaign to introduce people to the individual lions who roamed their backyards. Stein called the initiative “Pride in Our Prides,” and over the next several years he set about fitting local lions with satellite collars.

When he knew which lions frequented which villages, he asked residents to name their local lions. And they took to it with a passion. The more Stein learned about each lion, the more he shared with locals.

With the use of satellite technology and the ubiquitousness of cellphones — even in the depths of Botswana — Stein and his group are able to tell when a specific lion is heading into human territory. When that happens, a text-message alert is sent out to the village, telling them to take precautions with their livestock.

Since Stein started the project, the poisonings and killings have dropped sharply, and he sees villagers using alternate methods of preserving livestock — such as penning them at night and building fires.

“There hasn’t been a single case of poisoning since we started,” Stein said.

Now when members of Stein’s crew drive by, residents flag them down. They ask about the lions by name, wanting to know how healthy they are, how their cubs are doing or if there are any recent photos of them.

As the program continues to expand, Stein’s group works to help locals build enforced corrals, employ herders to watch after livestock and grow increasingly familiar with their maned neighbors. Because once a person understands something, it’s no longer something to fear.