Lance Fritz: Why we need NAFTA 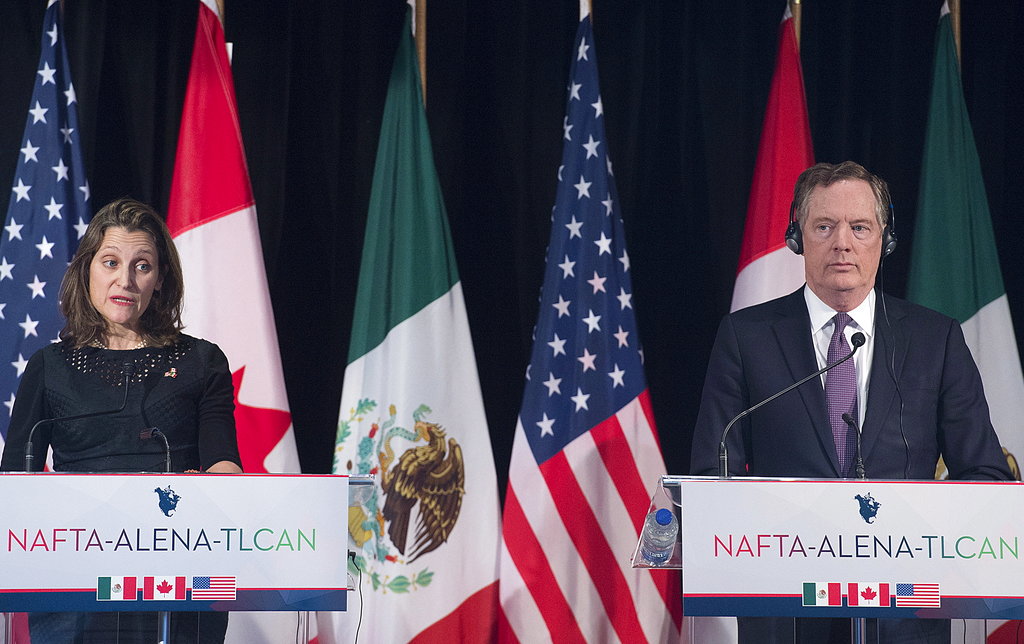 Foreign Affairs Minister Chrystia Freeland delivers her statement to the media as United States Trade Representative Robert Lighthizer looks on during the sixth round of negotiations for a new North American Free Trade Agreement in Montreal on Jan. 29. (Graham Hughes/The Canadian Press via AP)

As the chief executive officer of the United States’ largest publicly traded railroad, I have a comprehensive view of the nation’s economy. Freight railroads are the bloodstream of U.S. business, supporting the livelihoods of employees in nearly every sector of the economy. Increases in demand for autos, grain, plastic, beer and thousands of other products often register in Union Pacific car-loadings long before they are reflected in broader economic statistics.

From my vantage point, it is clear that the recently adopted tax-reform law will provide meaningful stimulus for the U.S. economy. I hear positive news from our customers every week — from a steel company that plans to build a new plant in America’s heartland, to tens of billions of dollars being invested in the chemicals industry on the Gulf Coast, to foreign manufacturers choosing the United States for their next major investment.

At our company, we just announced a $550 million rail-yard construction project in Texas, the largest capital investment in a single facility in Union Pacific’s 155-year history. While this rail yard was under consideration for some time, we expect the project to benefit from growth enabled by tax reform.

Clearly, our economy is on the rise, and tax reform will help generate even more momentum. But America’s potential exit from the North American Free Trade Agreement threatens to undo much of that progress.

Exiting NAFTA would mean increasing tariffs, which would increase costs for consumers and businesses. About 60 percent of U.S. imports are intermediate goods for U.S. production, so raising costs through what will be functionally higher taxes on production would make U.S. businesses less competitive — thwarting tax reform’s goal of allowing people and businesses to invest their money as they see fit.

Many of the same executives who are excited about the economic benefits of the tax cuts are facing equal, if not greater, economic losses if NAFTA is eliminated. Their companies compete where the demand is, and 95 percent of the world’s population lives outside of the United States.

In the future, booming middle classes, particularly in emerging markets, will be increasingly important consumers of U.S. exports, including agricultural products, services and manufactured goods. Many crops, including wheat and almonds, see more than half their volumes sold abroad. Other exports, such as plastics, commercial aircraft, industrial equipment and resins, are goods that the United States produces in greater volumes than we consume.

At Union Pacific, we see this trend firsthand, as nearly 40 percent of our shipments now have an international component — coming from or headed to Canada, Mexico, Asia, Europe and beyond.

The business leaders I’ve spoken with understand that global trade will continue with or without the United States, and they are concerned that America could fall behind as other countries strike trade agreements of their own. In October, Mexico reached an agreement to import wheat from Argentina. To the extent Mexican consumers shift their consumption to Argentina, the price of wheat in America’s breadbasket will go down.

More recently, the remaining 11 nations in the Trans-Pacific Partnership announced that they had decided to press ahead, despite the U.S. decision to withdraw from the deal, by formally agreeing to a new pact.

In this increasingly competitive environment, it will be critical for the United States to strengthen its most important trade partnerships, not abandon them.

While NAFTA does require modernization, the United States should back away from pushing positions that are functionally “poison pills” that would kill it. To take one example, the United States is seeking a “sunset” clause that would automatically terminate NAFTA after five years unless all three countries agreed to continue. This would cause significant uncertainty for long-term business planning and investment. A more straightforward alternative would be to replace the sunset clause with a negotiation clause, under which any of the three countries could choose to prompt a negotiation of specific NAFTA issues after a reasonable period.

The U.S. economy is humming, and the recent tax legislation is clearly a strong tail wind for future growth and expansion. Let’s not ruin the momentum by abandoning NAFTA.

Fritz is chairman, president and chief executive of Union Pacific.