Josh McDaniels backs out of deal to become Colts coach 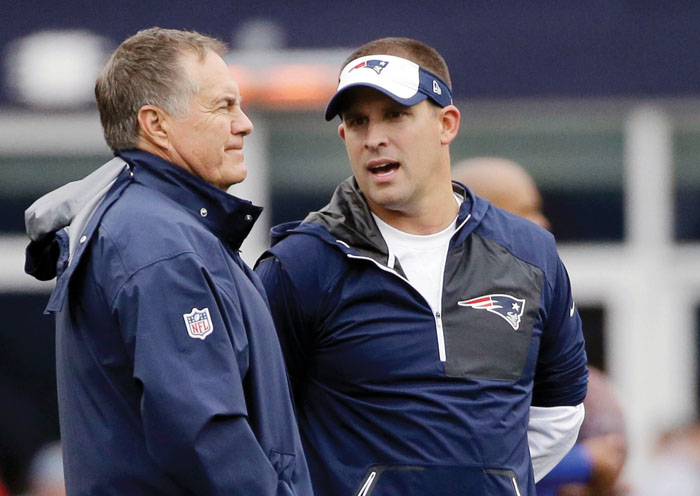 By MICHAEL MAROT, AP Sports Writer
INDIANAPOLIS (AP) — Josh McDaniels has backed out of a deal to become the Indianapolis’ Colts new coach, a decision that shocked the franchise hours after it announced his hiring.
The Colts confirmed McDaniels’ decision in a statement Tuesday night after reports emerged that the Patriots’ offensive coordinator had opted to stay in New England with coach Bill Belichick.
McDaniels had agreed to contract terms with the Colts to replace the fired Chuck Pagano. A news conference had been scheduled for Wednesday at Lucas Oil Stadium.
The Colts said McDaniels informed them Tuesday evening that he would not sign the deal.
“Although we are surprised and disappointed, we will resume our head coaching search immediately and find the right fit to lead our team and organization on and off the field,” the Colts said in the statement.
The Patriots and McDaniels’ agent, Bob LaMont, did not immediately respond to requests for comment.
By spurning the Colts after they waited 22 days to hire him, McDaniels leaves the reeling franchise as the only one without a coach. New England defensive coordinator Matt Patricia left Belichick’s staff a day after the Patriots’ Super Bowl loss to become coach of the Detroit Lions.
The move by McDaniels was reminiscent of his mentor, Belichick, who resigned as coach of the Jets with a handwritten note less than a day after he was hired in 2000.
Although McDaniels never signed his contract with Indianapolis, his stint was even shorter. The team announced his hiring in on its Twitter account late Tuesday morning. Hours later, the Colts had deleted the tweet and replaced it with the statement about his withdrawal.
Pagano was fired Dec. 31 after the team finished 4-12 in a season without injured quarterback Andrew Luck.
McDaniels has long been considered one of the best offensive minds in football and a top-tier head coaching candidate, although his previous head coaching stint with Denver ended badly. He went 8-8 with the Broncos in 2009 and 3-9 in 2010 before he was fired with three games left in the season.
Within days of Pagano’s ouster, Colts general manager Chris Ballard interviewed McDaniels during the Patriots’ postseason bye week. Two weeks later, reports indicated the deal was all but finished and potential suitors, like the New York Giants, started hiring other coaches.
___
More AP NFL: https://pro32.ap.org and https://twitter.com/AP_NFL