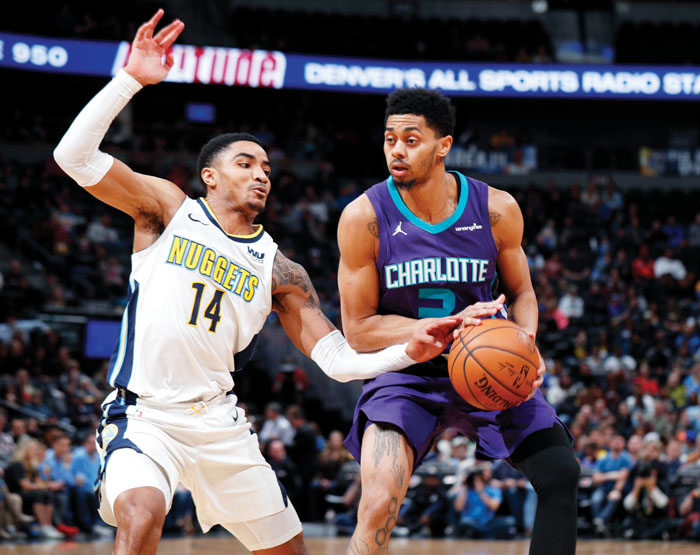 Will Barton and Jamal Murray scored 18 apiece for Denver, which had seven players in double figures. Murray played 34 minutes and attempted a game-high 15 shots while playing with a bruised right thigh sustained Saturday against Golden State.

The Nuggets used a big third quarter to pull away and win their third in a row. Jokic had 10 points and six rebounds in the period and Murray scored eight points in 1:03 to start a 14-6 run that gave Denver a 97-79 lead.

The bench extended the advantage to 19 midway through the fourth.

Kemba Walker led Charlotte with 20 points and Dwight Howard had 19 points and seven rebounds. The Hornets had won three straight and four of six.

Harris helped Denver get off to a quick start by shooting 5 of 6 on 3-pointers in the first quarter. The Nuggets led by 14 early in the second, but the Hornets outscored them by 20 to take a 54-48 lead.

Denver closed the first half on a 15-8 run to take a one-point lead at the break and never trailed in the second half.

Hornets: Nicolas Batum had 15 points and Jeremy Lamb scored 14 off the bench. … F Marvin Williams missed his fourth straight game with a sprained left ankle. Charlotte coach Steve Clifford said he hopes Williams will be available Thursday night in Portland. … Walker has scored in double figures in 17 straight games and 51 of the 53 games he has played this season.

Nuggets: F Darrell Arthur and F Wilson Chandler were dealing with flu-like symptoms but were able to play. Chandler had two points in 21 minutes and Arthur scored 10 in 14 minutes off the bench. … F Torrey Craig landed hard on his back after trying to block Cody Zeller’s shot midway through the fourth. He stayed down for a few minutes but stayed in the game.

Hornets: At the Portland Trail Blazers on Thursday night.

Nuggets: At the Houston Rockets on Wednesday night.

Bruised, not beaten, White back for another shot at…