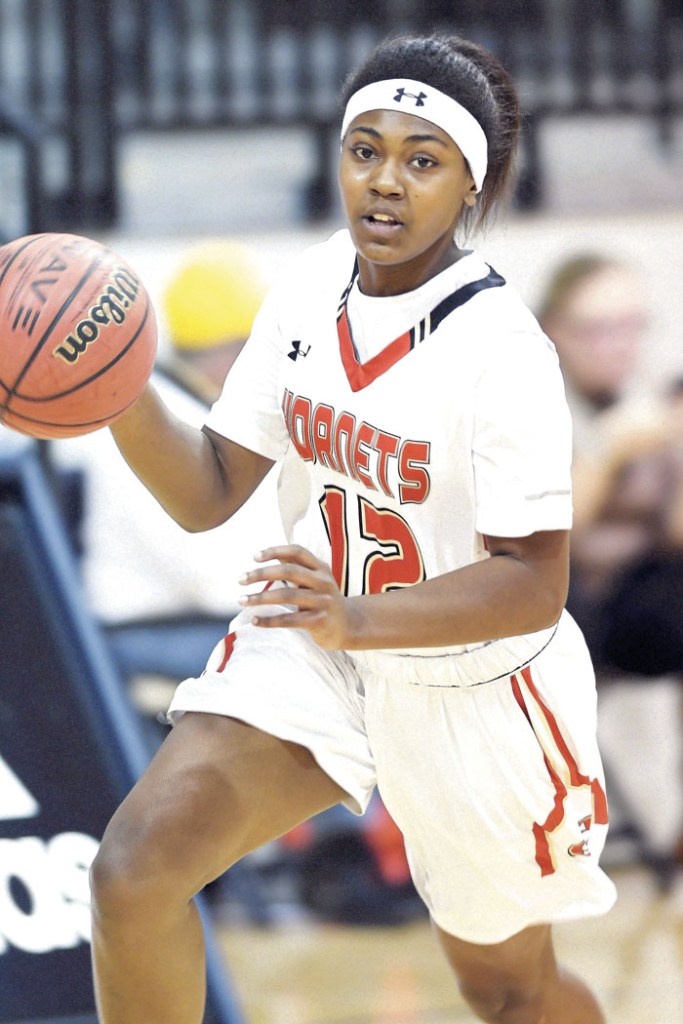 SALISBURY — Salisbury’s girls basketball team took steps toward sharing a Central Carolina Conference championship on Tuesday, but the Hornets were walking in quicksand.

They were very fortunate to beat lightly regarded North Davidson, 45-42. The Black Knights (8-13, 5-12 CCC) weren’t lucky. They had a half-dozen 3-point attempts rim out in the second half.

The Hornets (19-3, 15-2 CCC)  trailed most of the game and were down by as many as 12 points in the third quarter before surging when they absolutely had to. Salisbury’s rally kept the Hornets tied for first place with East Davidson.

“That might have been the best fourth quarter we’ve played all season, and that’s the reason we won,” relieved Salisbury coach Lakai Brice said. “We did absolutely nothing for a long time.”

North Davidson did absolutely nothing the first four minutes, failing to score, but the Hornets only managed to go ahead, 6-0. By the end of a sluggish first quarter, the Black Knights had settled in for coach Katelyn Frazier and had tied it 9-all.

“They came ready to play, and we didn’t,” Brice said. “That’s the thing about this league. There are so many dangerous teams, and you can’t take anyone for granted. You’ve got to come to play every night.”

Despite its record, North Davidson looked confident in the second quarter, smashed the Hornets on the glass and grabbed an 18-11 halftime lead when Courtney McMillan powered in a three-point play.

“That first half I just felt lost for some reason,” said Salisbury floor leader Anayia Fulson.

It got worse before it got better for the Hornets. Ashley Davis drilled a 3-pointer to open the second half for the Black Knights. Janika Glenn got a steal and a bucket for the Hornets, but then Davis knocked down another long 3-pointer. Now the fired-up visitors owned a 35-23 lead over the Hornets, who had expected a breezy Senior Night victory.

That 12-point deficit was the wakeup call for Fulson. She drove and scored with 5:20 left in the third quarter, and from that point forward, the sophomore was a whirling dervish, a holy terror. She would score 16 in the second half.

Salisbury pressed full-court and used its quickness to force turnovers. North Davidson’s lead melted, but at the high cost of foul trouble for the Hornets. Salisbury senior Mario Capito got three fouls in less than two minutes and headed to the bench with four personals. When Troutman got her fourth, the Hornets had to back off.  Without Troutman’s rebounding and passing, they would have been in serious trouble. Allison Hyatt made a free throw at the end of the quarter, and North Davidson took a 30-26 lead to the final eight minutes.

McMillan’s layup gave North Davidson a 34-29 lead with six minutes left, but the next four minutes belonged to the streak-shooting Capito, who had really been struggling.

“Senior Night, so I was nervous on my shots,” Capito said. “But before the fourth quarter started, we talked about what we had to do and we came out determined. It had been a bad game for us, but we turned it around right there. In the fourth quarter we were a team with one heartbeat, everyone playing together.”

With 5:52 left, Capito cut Salisbury’s five-point deficit to two with a bomb from the right side, from in front of the Hornets’ bench. When Capito makes one, she usually makes three in a hurry, and no one knows that better than Brice.

When the Hornets had the ball out of bounds underneath, Brice called for a set play to get Capito open. She had time to load up from almost the same spot, and buried another one. That put the Hornets up, 35-34, their first lead since the first quarter. Capito’s slump was officially over.

When Troutman dished to Fulson for an easy bucket, the Hornets went up by three. Capito’s third 3-ball of the quarter, this one with 2:20 remaining, put the Hornets ahead 40-35.

North Davidson kept fighting. When Hyatt tossed in a layup that almost hit the roof, the Hornets led 40-39, with the clock ticking under a minute.

Fulson made the second of two free throws for a 41-39 lead. Troutman snared a big defensive rebound off a point-blank miss, but when she missed two free throws with 42 seconds remaining, the door was still open for North Davidson.

A 3-pointer by Davis that would’ve given the Black Knights the lead squirmed off the rim with 30 seconds left. Troutman seized the board with authority and Fulson got a breakaway for a 43-39 lead.

McMillan’s three-point play with 12 seconds left got the Black Knights back within 43-42.

Fulson stepped to the line with eight seconds left and calmly swished two huge free throws for a 45-42 SHS lead.

“I just had to make those,” Fulson said. “We needed them.”

Salisbury defended the 3-point line furiously on North Davidson’s final possession. Davis got off a heavily contested shot from the right wing, but it was well short. Lexi May gripped the rebound, and the Hornets were still in position to share the conference championship.

“This team plays well when it’s down,” Brice said. “I’m extremely proud of the way we responded in the fourth quarter.”

NOTES: Capito scored 13 and has 944 career points. Troutman was held to nine points but pulled down 13 rebounds.  … McMillan had 11 and Davis scored 10 for the Black Knights. … North Davidson spent a lot of time at the foul line, shooting 15-for-26 on free throws. The Hornets were 7-for-15. … Salisbury plays at South Rowan Friday. South handed the Hornets a CCC loss and also beat Salisbury in the semifinals of the Christmas tournament at Catawba.