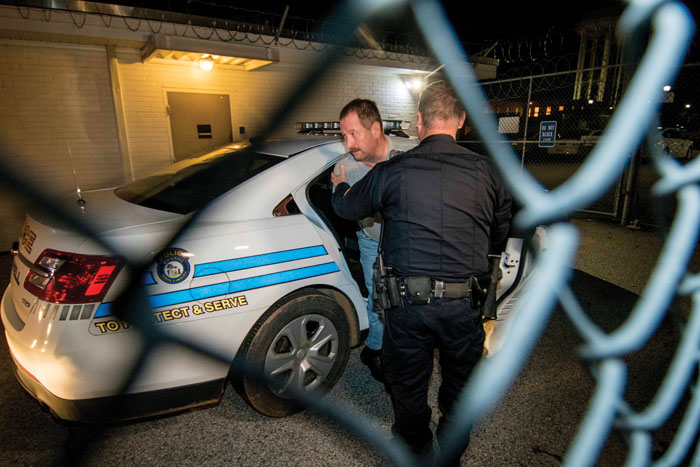 ROCKWELL — A Davidson County sheriff’s deputy was charged Tuesday with robbing the F&M Bank in Rockwell, authorities said. He was promptly fired from his job.

Jeffrey Dean Athey, 51, of the 100 block of Knotty Pine Circle in Salisbury, was charged with felony armed robbery with a dangerous weapon and was placed in the Rowan County Detention Center under a half-million-dollar bond.

According to the Rockwell Police Department, Athey entered the bank at 418 W. Main St. about 3:35 p.m. and showed a Glock 42 semi-automatic handgun. Athey told the bank teller that he needed money, and the teller gave him money, police said.

An arrest warrant said Athey stole $1,000 and, using the gun, “threatened and endangered” the life of the teller.

He left the bank driving a silver late-model Ford Mustang and headed west on Main Street toward Granite Quarry. A Rowan County sheriff’s deputy spotted the vehicle about four minutes later. Sources say law enforcement officers were already in the area in search of a possible impaired driver.

Davidson County Sheriff David Grice said he received the news about 4:30 p.m. Tuesday. He said Athey has worked for his agency for a number of years and left the Sheriff’s Office to work for the private military company formerly known at Blackwater.

Now known as Academi, the company was founded by former Navy SEAL Erik Prince and does private security work, much of it overseas in war zones.

“I am as shocked and appalled as anyone else about Mr. Athey’s behavior,” Grice said. “During his employment with our agency, he gave no indications that this type of behavior could occur. I am thankful that Mr. Athey did not injure anyone during this incident or resist arrest.”

Grice said Athey did not show up for work Tuesday and his partner was concerned. The partner learned about the robbery about the same time that Grice was notified.

Athey, who was led into the Rowan County Magistrate’s Office late Tuesday evening in handcuffs, had nothing to say. He was seated in the back of a Rockwell police car and led into the jail through a side, gated maintenance entrance.

The power of a story: National Geographic explorer uses…