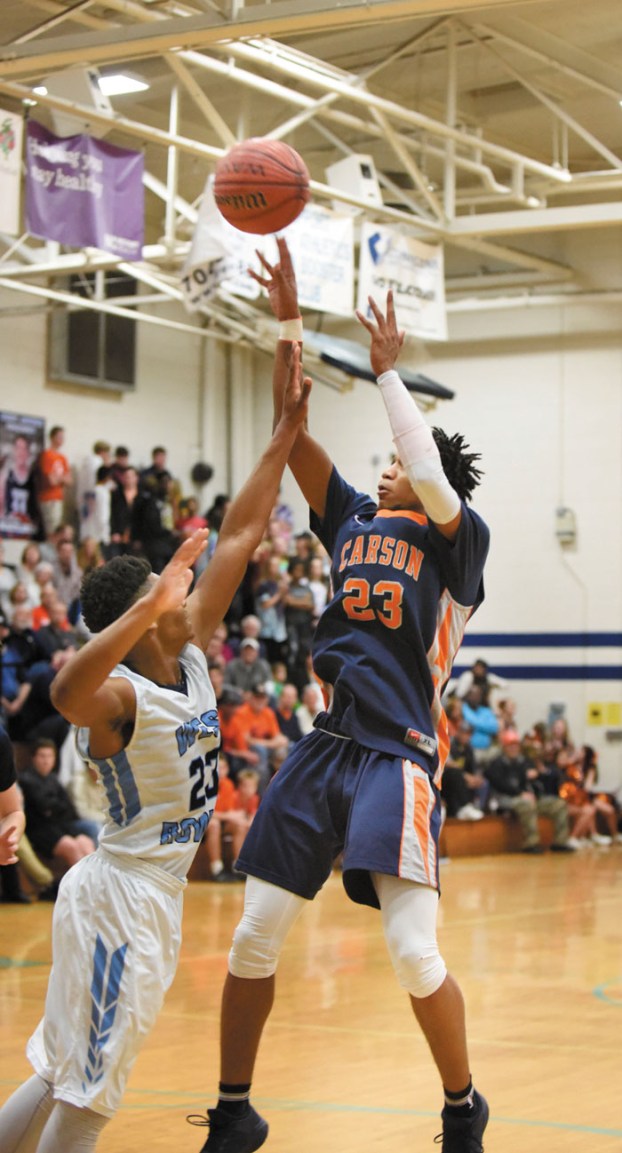 MOUNT ULLA — Carson’s boys basketball team may have been late for the party Tuesday night — but still had itself a fabulous time.

Late arrivals due to a bus breakdown, the Cougars turned West Rowan’s home court into a magic kingdom in a pivotal, 94-74 North Piedmont Conference victory.

“This is a big win,” coach Brian Perry said after Carson (20-2, 8-1) won its fifth straight decision and clinched at least a tie for the conference championship. “Any time you can come up here and beat West Rowan at West Rowan, you’ve got to feel pretty good about yourselves. Offensively, we were great. Defensively, as always, we had our hands full with (Caleb) Mauldin.”

Carson overcame Mauldin’s game-high 35 points — but the Falcons couldn’t West Virginia, Maryland and Dilly-Dilly their way past another lights-out shooting performance by the Cougars.

“They just have chemistry,” Mauldin said. “And they shoot 3-pointers like it was nothing. They are talented on a lot of levels.”

That’s high praise from the 6-foot-8 senior, but certainly deserving. Carson knocked down eight 3-balls and reached the 90-point plateau for the second time this season.

“In practice, we’re calling this ‘Championship Week,'” said Carson’s Jamarius Hairston, the 6-3 senior who netted a team-best 22 points. “That’s one down and one to go.”

Carson, which placed four scorers in double figures, can clinch its first conference title Thursday night when it hosts South Iredell. The Vikings beat Carson by two points on Jan. 24.

“It would be the first (championship) in school history,” junior Cole Perry said, after collecting 15 of his season-high 19 points in the first half. “It feels really good playing with these guys. It’s five guys who can all score.”

This one may have been over as soon as Carson scored the game’s first 12 points. When Perry slithered between two Falcons for an offensive rebound and putback, the Cougars led 25-9 late in the opening period.

“Cole Perry’s game keeps getting better,” West coach Mike Gurley said after the Falcons (12-11, 5-4) lost for the third time in their last four. “He’s long, he can drive and he can shoot it too.”

Carson’s 15-point halftime lead ballooned to 83-56 when Hairston drained a three as the third quarter expired. The Cougars led by as much as 87-56 early in the final period.

“We may have gotten here a little late,” Coach Perry said. “Our bus broke down as soon as we left Carson’s parking lot. But still, we were ready for them.”

West closes its NPC regular-season at Statesville on Thursday. “We’ve got to clean some things up,” Gurley said. “But as far as tonight goes, we just ran into a buzzsaw.”

Take it to the limit: Eagles outshoot Patriots for first Super Bowl win

MINNEAPOLIS (AP) — As their delirious fans sang their theme song and their owner lifted the Lombardi Trophy, the Philadelphia... read more