Bruised, not beaten, White back for another shot at gold 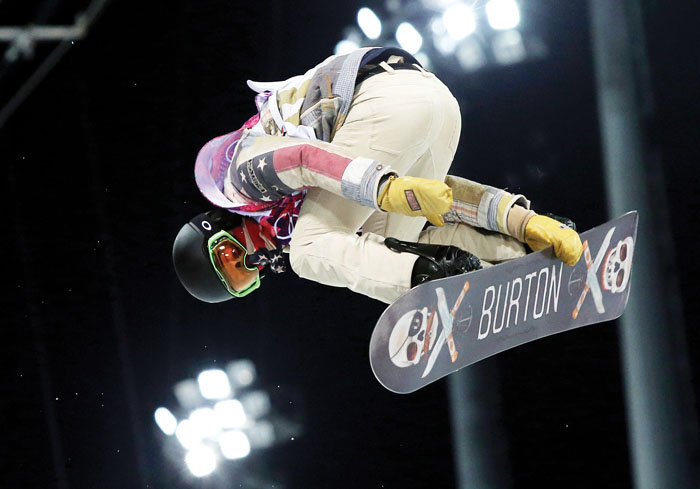 FILE - In this Feb. 10, 2014, file photo, Shaun White, of the United States, gets air during a snowboard halfpipe training session at the Rosa Khutor Extreme Park at the 2014 Winter Olympics in Krasnaya Polyana, Russia. White says there were times in the weeks after he slammed his face into a halfpipe in New Zealand and had to be helicoptered off the mountain when he wondered what was to be learned from it all. To outsiders, the answer is simple. The accident served as a jarring reminder of the hurdles White was willing to overcome to make it back to the Olympics, and this time, to leave with a third gold medal. (AP Photo/Sergei Grits)

The picture on Shaun White’s phone is not for public consumption. His upper lip is a torn up mash of blood and gristle and bone.

He took the selfie shortly after bashing his face into a halfpipe while training in New Zealand last October. It was an accident that forced him to be whisked off the mountain in a helicopter and into a hospital for surgery to reconstruct the area from the bottom of his nose to the top of his lip.

Though White called it more of a nuisance than anything career-threatening — “I had a moment where I was like, ‘Really? This is so uncalled for,” he said — the rehab was awkward and painful. He needed 62 stitches. A therapist had to spend hours reaching inside his lip and massaging the area to break up scar tissue.

“I’m still waiting for what’s to be learned from it,” White says.

To outsiders, though, it’s easy. The picture and the video of the accident that he recently released on social media serve as jarring reminders about the hurdles the world’s most famous snowboarder has been willing to climb to return to the top, which would mean winning an Olympic gold medal later this month in South Korea.

“The fact he overcame that and even made the team, and made it in the fashion he did, is one of the best sports stories I’ve ever seen, heard about and, luckily, been a part of,” says JJ Thomas, the Olympic bronze medalist who now serves as White’s coach/riding buddy. “It’s been pretty impressive watching him overcome the mental hurdles, from just coming back to snowboarding after that and doing basic tricks, to winning that Snowmass event with a 100.”

The perfect score at Snowmass secured White’s fourth trip to the Olympics.

If 2006 was his raucous, mop-topped coming-out party and 2010 was where he set down the marker as the greatest of all time, then 2014 might best be described as the Olympics where hubris got the best of him. Clearly hearing the message the IOC sent when it added slopestyle to the snowboarding program, White decided he’d put that event back in his repertoire and try for two gold medals. He spent the entire season injured, rushing back and forth between the halfpipe and slopestyle courses and, ultimately, was unable to accomplish any of his goals. He dropped out of slopestyle and finished fourth on the halfpipe.

When he returned home from Sochi, he watched the thoroughly entertaining documentary of his journey, “Russia Calling,” but didn’t quite recognize the movie’s protagonist.

“I was like, ‘Wow, this looks so intense. I’ve never been so agro before,’” White said. “I got back and said, ‘If I were to do it again, what would I do differently?’”

As it turns out, a whole bunch.

He cut down on high-profile sponsorship deals, the likes of which he used to collaborate on with Target, and has become much more focused on his own brand. His website mentions a grand total of seven corporate partners, one of which is Air & Style, the music-and-snowboarding festivals he owns — and has put much of his own, personal energy into — in Beijing, Sydney and Los Angeles.

He put his once-burgeoning music career on hold — he was the guitarist in the group, “Bad Things” — and got more serious about his physical fitness, cutting out alcohol and hiring a trainer and physical therapist.

He parted ways with coach Bud Keene, a main player in the 2014 documentary with whom White teamed to prepare for the previous three Olympics, and connected with Thomas, who serves the role of buddy and compatriot as much as coach. He also brought into his circle Toby Miller, a promising 17-year-old up-and-comer who has injected his own brand of youthful spirit to a sport that is, ultimately, geared toward the young.

“He definitely has a mindset that’s different from anyone I’ve ever met,” Miller says. “He sets his mind on something and doesn’t stop at anything, until it happens. I don’t know many people who could pull through after that kind of accident and do that.”

Though he is driven as ever, the most notable difference in White very well might be the way he committed himself to enjoying the journey more and focusing less on dominating every time he gets near a halfpipe. For instance, with his Olympic spot wrapped up and nothing left to accomplish, he pulled out of both the final qualifier at his home halfpipe in Mammoth Mountain, then chose not to compete at the Winter X Games, which is largely considered the pinnacle of this sport in any year that doesn’t include the Olympics.

“A friend of mine was saying, ‘You’ve done so much, already won the Olympics twice, been a third time, you’re still riding, making podiums, maybe you should try to enjoy the ride and have some fun,’” White says. “I thought about it and I was like, ‘You’re right. Let’s just have some fun now.’”

Armed with that new mindset, White redoubled his effort on the halfpipe. And in the end, one thing really hasn’t changed. He is still the biggest name in his sport, and all eyes will still be on him when the gold medal is at stake in Pyeongchang on Feb. 14.

As if to prove that, White put down a run at an Olympic qualifier in Snowmass that, if repeated, could very well win the Olympics.

It included a frontside double cork 1440 — his own twist on the famous Yolo Flip that Iouri Podladtchikov used to win the Sochi Olympics — and closed with back-to-back 1260 jumps, including the double McTwist 1260, a jump White patented and that very few riders even try.

“When I was in New Zealand, I ripped my face open trying these tricks,” White said. “It’s been a long recovery from that to get to this point.”