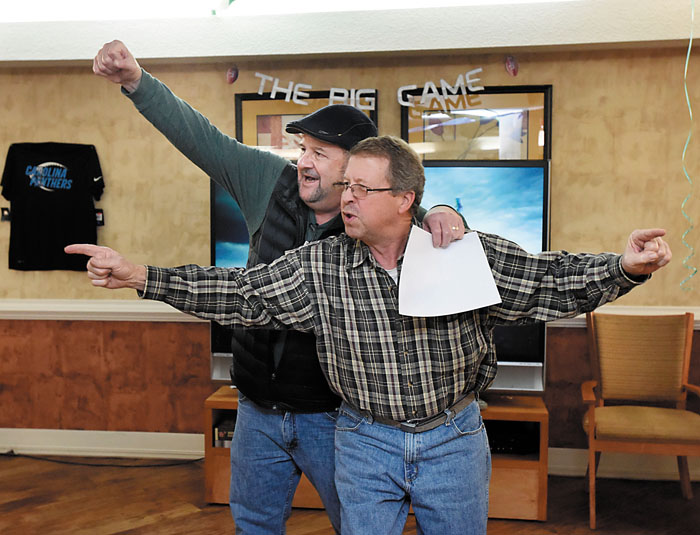 At the Autumn Care Super Bowl Party, Mark Eagle and Autumn Care administrator, Glenn Terry lead a cheer for the Eagles. photo by Wayne Hinshaw, for the Salisbury Post

SALISBURY — While many people across the country sat down in living rooms or bars to watch the biggest football game of the year, Glenn Terry sat with 30 or so Autumn Care residents in the assisted living facility’s dining room.

Glenn, who is the administrator for Autumn Care, said this was the tenth Super Bowl party he’s organized since he joined the facility 11 years ago.

“We always have a good time here,” Glenn said.

Glenn said it isn’t necessarily that every resident who comes to the gathering is a football fan.

“They love to get together in groups and this is a once a year event. There’s weekly events, daily things that they do. And they just always look forward to the Super Bowl party whether they enjoy football or not,” Glenn said.

Ruthie Walker was one resident who did enjoy football — although she said she would have preferred that the Panthers were playing.

She said “it was bad” when the Panthers were knocked out of the running for the Super Bowl. But she said, if she had to root for a team Sunday night, it would be the Eagles.

Glenn said he was giving out Panthers-themed prizes this year to residents who guessed a final score closest to the actual final score.

Walker said she debated for a while about what to write down because she wanted to win the grand prize — a Panthers football — for her 18-month-old grandson, Keaton.

“He loves balls,” Walker said. “A Panther ball would be hard to take away from him.”

Glenn, who became an Eagles fan after living in Philadelphia, said that he knew of three Patriots fans in the room Sunday night.

“All the rest are Philadelphia Eagles fans. Whether they know football or not, they know that New England has won so many times that the Eagles have to win,” Glenn said.

When asked whether he has tried to influence residents’ opinions of the Patriots, Glenn said, “Absolutely.”

Glenn’s wife, Rebecca, has helped him with every Super Bowl party he’s hosted.

Resident Stella Smith said she’s come to every Super Bowl party since she moved to Autumn Care three years ago. She said she comes for the food and the activity.

Glenn said residents start asking him about the Super Bowl party as early as November.

“This is a fun party of my job,” Glenn said. “You know, we have a lot to do as an administrator but kicking back and hanging out with the residents during the Super Bowl party is great fun.”

Glenn said the winners of the score-guessing contest would be announced during bingo today.

Oh, what a night: Good times roll at annual…