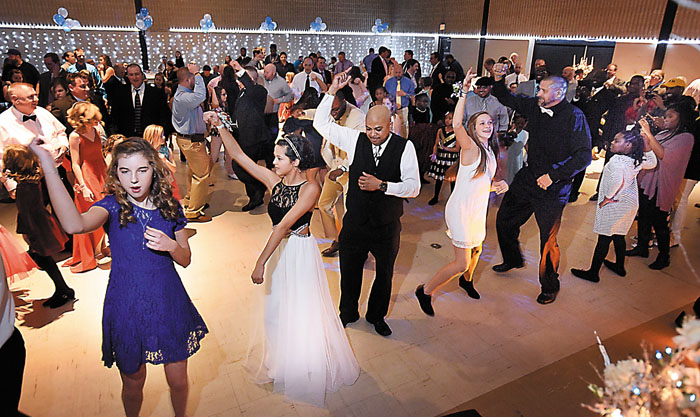 Fathers and daughter dancing the night away at the annual Father-Daughter Dance at the Civic Center. photo by Wayne Hinshaw, for the Salisbury Post

The 22nd annual Father-Daughter Dance sponsored by the Salisbury Parks and Recreation Department was another great night for young girls and fathers to spend a special evening together.

The walls of the Civic Center were lined with small white lights and blue and white balloons. The DJ kept the music playing and the red, yellow, green and blue lights twirling and flashing.

Girls aged 4-13 got to dream of this night all year. The girls came dressed up in their very best “dressy dress” or evening dress and most were wearing a flower corsage or a tiara, ready to dance the night away with their father, grandfather or uncle.

This was a night when fathers and daughters got to bond like no other time. Busy fathers devoted the entire evening to their girls, much like going out to a school prom. The girls were electrified with all the special attention. Most who attend always want to come back next year.

Mark Conforti brought his 7-year-old daughter Mia to the dance for the fourth year in a row. Both dressed for the night out with the love for each other glowing on their faces as it did with the other couples. Mia said, “The dance is my favorite thing to do with my dad.” Her father, Mark, said, “We do a lot of things together, but this night is a special night.” Mia was dressed in a Carolina blue and white dress with golden slippers. She had her hair pulled up. Dad had on a tuxedo and a blue and white bowtie.

Mark Koontz was dancing with his two daughters Stella, 12, and Lola, 9. Mark said he had been coming for 15 years. He first brought his older daughter, Alana, until she aged out, but he has continued with the younger girls. Stella reported that this was her eighth year.

Some of the first timers were thrilled with the event. Diallo Finger and his 5-year-old daughter D’asia experienced it for the first time. D’asia was dressed in her black dress and white sweater with her pink purse around her neck. She had bows on her shoes.

Ava Trapp, 11, with her sister Julianne, 8, at her side, said, “I like being out with my dad. I really like to dance too. We dance at home sometimes.” This was her sixth dance with her dad, Jeremy Trapp.

A few other father-daughter couples were Jason Bober and daughter Claire, 6. Chris Beal with daughter Arden, 4. Tony Lindsay brought his goddaughter Nevaeh, 9, for the first time.

The girls enjoyed having their dads spin them on the dance floor. Most of the dads handled the slow dances best, but some fathers kept pace in the newer, faster-paced dances. When the dads got tired and took a break at the refreshment table, the girls kept moving. A line dance that had about 20 girls was weaving around the crowded floor. I’m not sure it was a dance or just a “follow-the-leader train” with some dropping out and new girls jumping in.

As the old song from my youth said, “Oh, What A Night.”