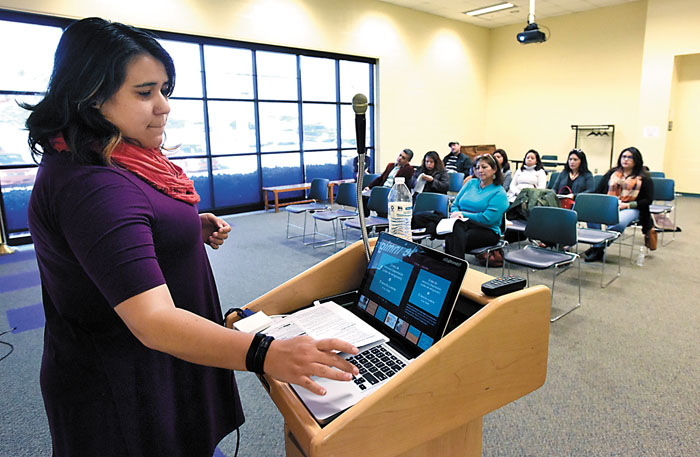 Attorney Atenas Burrola, Director of Immigraton Law Clinic, was a speaker at the immigration meeting at the South Rowan Library. photo by Wayne Hinshaw, for the Salisbury Post

CHINA GROVE — “So has anyone heard of DACA, by chance?” Alan Cross asked the room.

Most of the 15 or so attendees laughed. Some yelled out “Yes” or “Sí.”

Cross was speaking to a group of primarily Hispanic people who had to come to learn more about their rights and the rights of those they knew at an event called “Conoce Tus Derechos,” or “Know Your Rights.”

Cross had come as a consultant for Bibles, Badges and Businesses for Immigration Reform, a group that he said focuses on “trying to create a good environment for immigrants” through immigration policy.

He said that, while the event was primarily about immigration law, immigration policy is equally important.

DACA allows people who came to the U.S. as minors and are staying illegally to receive a renewable two-year deferred action from deportation.

Cross said DACA is being debated in Congress and that “everyone is hoping” a decision about whether DACA recipients will be able to stay in the U.S. will be made by Feb. 8.

Feb. 8 is when funding for the federal government will run out unless Congress passes a bill to prevent it.

“Democrats are saying that if we don’t get DACA through, we aren’t going to fund the government again,” Cross said. “They’re kind of threatening that.”

Cross said Senate Majority Leader Mitch McConnell has promised to have legislation about DACA by Feb. 8.

“So what we’re hoping is that the House and the Senate can come together and they can come to some type of an agreement on dreamers, on DACA,” Cross said.

If DACA — and other deportation-prevention measures like Temporary Protected Status, or TPS — are not extended, the rights of thousands of Rowan County residents will be affected.

But for now — as the event’s other speaker, Atenas Burrola, pointed out in her presentation Saturday — immigrants have numerous rights.

Burrola, who is the director of the Immigration Law Clinic in Charlotte, did her presentation in Spanish. Activist Flora Calderon-Steck translated her talk into English.

Burrola explained what rights immigrants have when dealing with police, ICE agents and neighbors.

For instance, Burrola said, if you are stopped by police you have the right to remain silent. She said you do not have to consent to a search of yourself or your vehicle.

Burrola also said a person does not have to be a citizen to call local representatives.

“Definitely call your congressman. Definitely do that,” Burrola said in Spanish.

Burrola said the only requirement for calling and voicing your opinion to a congressperson is that you live in his or her area.

For more information about immigrant rights, go to cliniclegal.org or aclu.org.