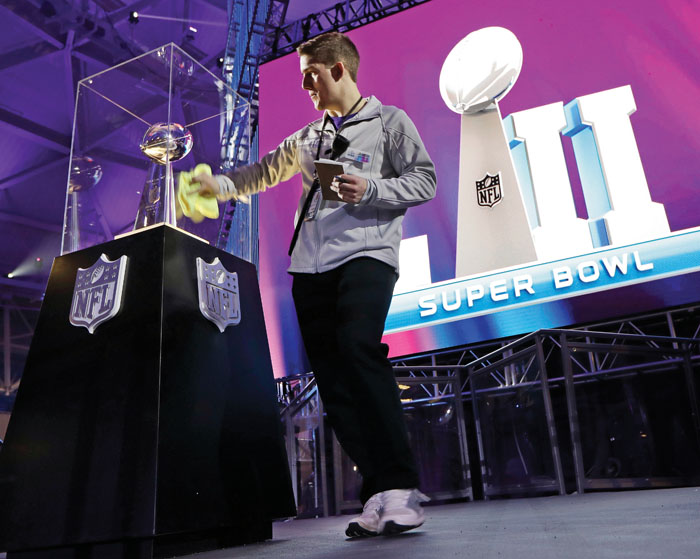 Doug Pederson didn’t have a hard sell, either.

The Philadelphia Eagles are an unselfish group that prioritizes winning over personal accomplishments. It’s a major reason why the Eagles (15-3) are playing the Patriots (15-3) in the Super Bowl on Sunday.

“It’s a group that doesn’t really care who gets the ball. The bottom line is trying to win the game,” Pederson said. “I didn’t have to sell it too much.”

Pederson was 7-9 last year in his rookie season as head coach but has guided the Eagles from worst to first in search of the franchise’s first NFL title since 1960. He found a way to blend a young locker room with a mix of accomplished veterans.

“I can remember this team showing up in April and talking about being at this place, talking about our dreams, aspirations and focusing on a grind,” safety Malcolm Jenkins said.

“Guys being unselfish, adding guys along the way that added to the team and continued to push, and every time we won and had some success — we even had some adversity — the team believed more and more. It’s been awesome to be a part of.”

Blount led the NFL with 18 touchdowns rushing and earned his second Super Bowl ring last season in New England. He didn’t get a carry in a loss at Kansas City in Week 2 and never complained. Same with Jeffery, who went from No. 1 receiver in Chicago to being one of the guys in Philadelphia.

Pederson set the tone and Carson Wentz carried it out with his team-first attitude and that filtered down the roster.

“He’s the most humble guy you come across,” Pederson said. “He’ll give it right back to the team.”

It was a smooth transition to Nick Foles after Wentz got hurt. Foles also is a respected leader who leads by example. It’s not a coincidence the Eagles sought this type of player.

“This is the most selfless team I’ve ever been around,” Pro Bowl tight end Zach Ertz said. “Guys don’t care about stats. They only care about winning. Doug is the best coach I’ve been around in managing players. He lets us show our personalities and if he needs to talk to somebody, he does it quietly and in a mild-mannered way. His selfless leadership is a big reason we’re here.”

The team is one of the closest-knit groups in the league and players genuinely care about each other and spent plenty of time together.

“When you see guys hanging out with players from other position groups, it’s special,” defensive tackle Fletcher Cox said. “I would go eat dinner with Donnie Jones. You don’t see a guy hanging out with a punter.”

If the Eagles win a few championships, perhaps the standard Pederson has set will eventually become similar to Belichick’s Patriot Way. They have to get the first win first.

MINNEAPOLIS (AP) — Ray Lewis and Brian Urlacher terrorized opposing offenses from the middle of the field. Randy Moss and Terrell Owens did the same to defenses on the outside.

The two hard-hitting linebackers and two big-play receivers highlighted an eight-person class voted into the Pro Football Hall of Fame on Saturday. Safety Brian Dawkins also received at least 80 percent support from the 47 Hall of Fame voters, along with contributor Bobby Beathard and senior nominees Jerry Kramer and Robert Brazile.

But the biggest stars of the class are the two linebackers that made it on their first tries, and the pair of lightning-rod receiver who sometimes caused as many problems for their own teams as for the opposition. Moss also made it on his first try, while Owens needed to wait for his third year on the ballot to get enough support.

Moss and Owens each played for five teams in their careers as they often wore out their welcome with their inability to get along with teammates and coaches at times.

But at their best, there were few players ever able to strike fear in defenses as much as Moss and Owens, who were both all-decade selections for the 2000s.

“The door knocked and I started getting excited,” Moss said of Hall of Fame President David Baker alerting him he has been elected. “All the emotions caught the best of me because it’s been a long journey and it ends in the Pro Football Hall of Fame. Tears of joy.”

Moss burst on the scene as a rookie in Minnesota in 1998 when he caught a league-leading 17 TD catches and helped lead the Vikings to the NFC title game. His combination of speed and athleticism made him the game’s most dangerous big-play threat and led to the phrase “You got Mossed” for embarrassed defensive backs.

He led the NFL in TD catches five times, including his record 23 for New England in 2007, and earned four All-Pro selections. He finished his career with 982 catches for 15,292 yards and ranks second all-time with 156 TD receptions.

Owens, who didn’t attend the announcement, entered the league as a third-round pick by San Francisco in 1996 but developed into a star known for some memorable playoff appearances, including his winning 25-yard TD catch to beat Green Bay in 1999; his 177 yards in a comeback win against the Giants in 2003; and his nine catches for 122 yards in the 2004 Super Bowl against New England just seven weeks after breaking his leg.

Owens ranks second to Jerry Rice with 15,934 yards receiving and is third on the all-time touchdowns receiving list with 153.

Lewis is widely considered one of the greatest middle linebackers, winning two AP Defensive Player of the Year awards and earning eight All-Pro selections. He anchored a dominant defense for the 2000 Baltimore Ravens in a season that ended with him winning Super Bowl MVP, then retired as a champion after Baltimore closed his last season with a title win over San Francisco in February 2013.

“Growing up as a child, I know what that looked like, Mike Singletary, Dick Butkus,” Lewis said. “Who dreams of being in that category, sitting with those guys?”

Lewis joined tackle Jonathan Ogden as the only Ravens voted into the Hall of Fame as both of the team’s first-round picks in its initial season of 1996 received the high honor.

Lewis’ career was also marked by legal problems off the field. He pleaded guilty to a misdemeanor charge of obstruction of justice after initially being charged with murder in connection with two killings following a Super Bowl party in Atlanta in January 2000. Lewis was also fined $250,000 by the NFL.

Urlacher wasn’t far behind Lewis with his play on the field and is the latest in a line of great Chicago middle linebackers to make the Hall, joining Butkus, Singletary and Bill George. He was the Defensive Player of the Year of 2005 and joined Lewis on the 2000s all-decade team.

Dawkins spent most of his 16-year career in Philadelphia, earning five first-team All-Pro selections for his versatility that included 37 career interceptions and 26 career sacks. He became the first player in NFL history with a sack, interception, fumble recovery and touchdown catch in the same game against Houston in 2002.

Kramer got passed over 10 times previously as a finalist before finally getting enough votes as a senior to become the 14th member of the Vince Lombardi Packers to make the Hall. Kramer helped anchor the Green Bay line for 11 seasons, winning six NFL titles and making the block that cleared the way for Bart Starr’s TD sneak in the “Ice Bowl” for the 1967 NFL championship.

Brazile was a finalist for the first time after a 10-year career for the Houston Oilers that included five straight All-Pro selections.

Beathard, also not on hand Saturday, helped build four Super Bowl champions in Miami and Washington and made seven trips to the title game during more than three decades as a personnel executive with a sharp eye for talent.

Five offensive linemen were among the 15 finalists, with tackle Joe Jacoby getting eliminated in voting that reduced the candidates to 10, and tackle Tony Boselli, guards Alan Faneca and Steve Hutchinson, and center Kevin Mawae getting cut in the next round of voting.

Cornerback Ty Law also made it to the final 10 in his second time on the ballot. Defensive backs John Lynch and Everson Walls, receiver Isaac Bruce and running back Edgerrin James were the other candidates eliminated in the first cuts.

“I’m glad I didn’t have to vote for this class,” Urlacher said. “It’s a great class.”