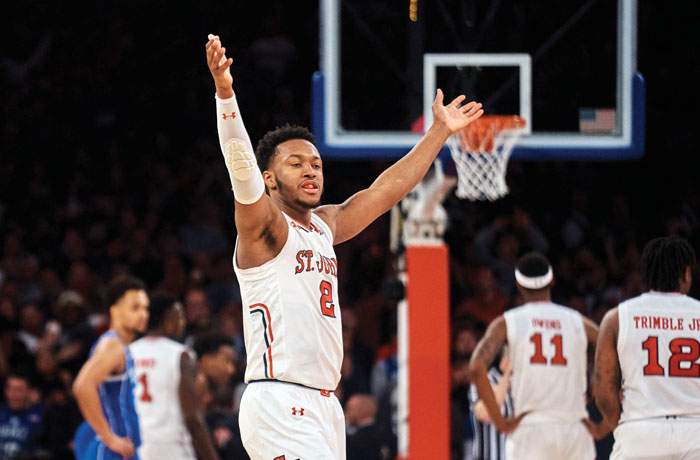 NEW YORK (AP) — That’s two losses in three games for No. 4 Duke — and this one to a team that hadn’t won since Christmas.

No wonder coach Mike Krzyzewski called it a “disgusting” performance.

“We got what we deserved,” Krzyzewski said. “We weren’t able to knock them out after we lost the first 12 rounds of a 15-round fight.”

Bashir Ahmed added 19 points and Tariq Owens had 17 for the Red Storm (11-13), who overcame an early 10-point deficit and fought off Duke’s heralded freshmen down the stretch in their biggest victory under third-year coach Chris Mullin.

It was the first win for St. John’s since Dec. 20 against Saint Joseph’s.

“We would have taken a win if it was in an empty gym,” Mullin said. “Thank God January is over.”

St. John’s was playing the second of three straight games against top-6 opponents in a span of nine days. Next up, a visit to No. 1 Villanova on Wednesday night.

“We are happy but we can’t stop here. We have to keep pushing,” said Ponds, a sophomore guard. “This is big to get a win on the board. We can start fresh.”

Gary Trent Jr. had 22 points for the Blue Devils (19-4), who perhaps got caught looking ahead to their first matchup of the season with bitter rival North Carolina on Thursday night.

“Ponds was really as good a guard offensively as we’ve played against,” Coach K said. “We came in prepared.”

Freshman sensation Marvin Bagley III scored 19 for Duke but sat out a significant chunk of the second half with four fouls. Wendell Carter Jr. added 14 points and 15 rebounds.

Outhustled all afternoon, Duke was coming off an easy win Monday over Notre Dame that followed a 65-63 loss at home to No. 2 Virginia last weekend.

“I thought they made us look bad, but we made ourselves look bad. We did not play basketball the first 32 minutes worthy of our program. And we had blank faces, we didn’t talk, we were like five individuals out there and it was disgusting, really,” Krzyzewski said. “I do not know why. I can tell you that’s not the group I’ve coached all year, and they were a very frustrating group to coach today because they didn’t respond to anything until the last eight minutes and that’s unacceptable.”

Winless in 11 Big East games this season, the Red Storm improved to 11-2 in nonconference play. They led by 11 with 6½ minutes left before Duke stormed back and took a 73-72 advantage on Trent’s two free throws with 1:35 to play, its first lead since early in the second half.

Ponds, who also grabbed seven rebounds in his second consecutive 30-point game, put St. John’s back in front with a driving layup and then drained a contested 3-pointer from the wing with the shot clock winding down to make it 77-73 with 40 seconds left.

“We stayed composed,” he said.

Grayson Allen’s only 3 seconds later trimmed the margin to one, but Owens hit two free throws with 32.2 seconds to go.

Bagley made one of two foul shots with 20.4 seconds left and Ponds did the same to make it 80-77 with 17.5 seconds to go. Allen missed a 3 at the other end and Owens grabbed the rebound before sinking one of two free throws with 2.7 seconds remaining to seal it as Ponds waved his arms, spurring on the sellout crowd of 19,812.

“The Garden was rockin’, no question,” said Mullin, recruited by Krzyzewski out of high school in 1980-81. “Duke has that brand. They bring ‘em in. … I was glad our guys stepped up not only to the challenge, but on the biggest stage.”

It was the first meeting between the teams since Krzyzewski got his 1,000th career win with a 77-68 victory at Madison Square Garden on Jan. 25, 2015.

Duke: Fell to 34-19 at the Garden, including 29-11 under Coach K. … The Blue Devils will be back in New York City next month for the ACC Tournament across the river at Barclays Center in Brooklyn. … Duke leads the all-time series 16-7.

St. John’s: After three competitive losses this season to teams currently ranked in the top 10, the Red Storm finally broke through. They have played the fifth-toughest schedule in the country according to the NCAA, the school said. “It felt like all those other games, it really did. But to come out on top feels much better,” Mullin said. “To turn it around against one of the most storied teams in college basketball, it’s great. … I’m happy for the guys. They needed it more than anything.”

The matchup between two of the top-10 winningest programs in Division I history was played in tribute to the late Howard Garfinkel, who ran the famous Five-Star Basketball Camp from 1966-2008, attracting many of the game’s greatest players before they blossomed in college. The logo at center court read “The Garf.”

Duke: Plays at North Carolina on Thursday night, the first of two regular-season meetings between the longtime rivals.

St. John’s: In their first meeting with top-ranked Villanova this season, the Red Storm lost 78-71 on Jan. 13 at Madison Square Garden.