Nettie Loflin was ‘everything fine and proper’ — and speedy 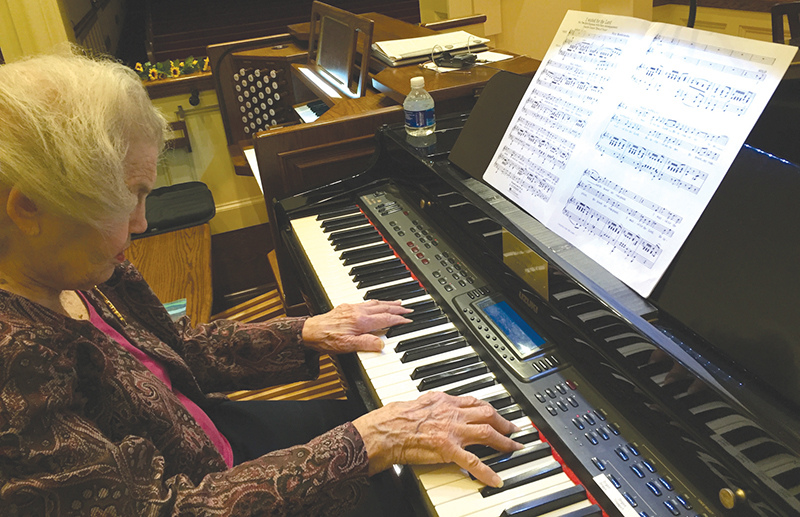 Although the ability to spread the love of music is over for Nettie Loflin, the lessons learned by her students over 60 years will live on for generations.
Nettie, who was born in Gold Hill but called New London home for many years, died Jan. 17 at age 86 after spending six decades teaching others the workings of musical instruments and the human voice.
While her number of pupils had decreased in recent years, she was still teaching. She gave her last lesson the morning of Jan. 13 and had a stroke the next day.
Nettie also served as director of music at Immanuel Lutheran Church in Rockwell for 20 years.
The Rev. Bruce C. Sheeks, pastor of Immanuel, closed his eulogy of Nettie on Jan. 20 in part by saying: “If the truth be known, when Nettie went up through the clouds early on Wednesday morning, she caused an upper level disturbance … and we got six inches of snow.”

According to several sources, Nettie marched to the beat of a different drum. While from most accounts she never taught percussion, her musical knowledge did have a large reach.
Nettie taught piano, voice and violin mainly, but she occasionally instructed students of guitar and dulcimer.
“She was always an organist and a pianist in some type of church,” said Gayle Loflin Starkey, one of Nettie’s three children.
Starkey says her mother was playing piano by the age of 3.
“She didn’t become interested in it. She was born into it,” Starkey said.
It was not until around age 10 when Nettie had her first professional lesson.
Sheeks shared at her funeral about Nettie taking piano lessons from a very strict teacher.
“She wanted her students not only to memorize their selections, but be able to play them from the music,” Sheeks said. “Nettie was 10 years old and her teacher gave her a really hard piece of music, so hard she knew none of her students would be able to memorize it. And the piano teacher wanted her students to perform this piece of music within a week. She wanted them to play from the music.”
Sheeks said Nettie was able to play it perfectly within a day, so she spent the rest of the time memorizing it. To be on the safe side, she still brought her sheet music with her, but she didn’t need it, he said.
“The day of the mini-recital came. Most all the students struggled playing this music,” he said. “They didn’t have time to learn and practice it. It was so hard. But when Nettie sat down at the piano, she placed her sheet music in front of her and began to play. She would occasionally look at her music so the teacher would think she was using it.
“But then Nettie noticed, the sheet music — it was upside down.”
She continued to play, but she knew her teacher could also see the status of the sheet music.
“After the piano keys cooled down, her teacher was fired up,” Sheeks said. “She said, ‘Nettie, you are really talented. You can read music upside down. So, you memorized your piece, just what I didn’t want you to do.”
Nettie grew up one of three children. The pastor shared how her parents were strict on the two daughters, having to dress a specific way and not expose too much flesh.
Sheeks said her father, Marvin Hill, also a pastor, would preach: “Showing too much skin was a temptation of the flesh and it will send you to Hell.’ ”
Hill also never wanted his daughters to marry, preferring they be evangelist singers with him. Nettie and her sister, Mary, would travel with their father, where Nettie would play the piano and the pair would sing.
“Many people told them they sounded like two angels in perfect harmony,” Sheeks shared.
In 1955, the sisters graduated from Bob Jones University. Nettie graduated cum laude with a music degree, majoring in voice. She minored in pipe organ, violin and string instruments.

At one time, Nettie had around 80 students. Many of her recitals took place at the Stanly County Agri-Civic Center, with later ones happening at First Lutheran Church in Albemarle.
Each recital had a white piano on stage. There would be baskets of flowers and a spotlight needed to be directed on each student. Each student would open by saying, “I shall play for you.”
“Nettie wanted things very proper, and pianists, guitarists and violinists to observe proper finger positions and vocalists to use proper diction,” Sheeks said during the eulogy.
His wife, Kim, added: “Nettie was pearls, glitter jackets and everything fine and proper — the epitome of a real Southern lady.”
Adelina Cato performed “Orange Blossom Special” at the funeral.
“It was one of her favorite songs to play with me so I figured I needed to play it to honor her,” said Cato, 23, of Rocky Mount.
On mention of Cato’s performance, Nettie’s daughter Gayle replied, “That was one of the most celebratory funerals I’ve ever been to. It was just amazing.”
Cato began taking lessons when she was 6.
“It was an honor to learn from Mrs. Loflin,” Cato said. “She touched so many people’s lives by sharing her music with them, and she was a true inspiration. I would not be who I am today without her.”
A few of Nettie’s other students also shared memories of her.
Cameron L. Jackson, 24, grew up in New London and was a student of Nettie’s for 10 years. He took violin and voice lessons.
“I’ve always credited Ms. Loflin for nurturing my passing interest in classical music into a vivacious love, one that would lead me to making opera my chosen profession,” Jackson, a baritone, said.
Jackson is in his second year as a fellow at the A.J. Fletcher Opera Institute at the School of the Arts.
Lindsay Megill, 27, began taking voice when she was 11. She studied with Nettie until graduating from South Stanly High School in 2008.
“She taught me to sing soprano, and introduced me to Italian arias and songs from several musicals,” Megill said. “It was because of her I joined the church choir, and was also able to audition for local theater productions with the Uwharrie Players and the Talent Company.”
Megill said her teacher inspired her to study music, leading her to Pfeiffer University where she received a bachelor’s degree in liberal arts music.
She now also sings with the Carolina Voices in Charlotte.
“She opened so many doors for me, and she is the reason music has been such an incredible part of my life,” Megill said.

Nettie found another love later in life.
“She always hated to waste time traveling from one place to another,” Sheeks said in his eulogy. “She needed a plane.”
She received her pilot’s license when she was 58. She had a four-seater “with all the bells and whistles on it,” Sheeks said.
On one trip, Nettie was bringing her daughter, Joy, and aunt Lena Mae back from a visit to Florida. A hurricane delayed their departure by two days.
“They finally thought it was safe for Nettie to be in the air,” Sheeks said, “but halfway back home she flew into hurricane-force winds and rain. It was the tip-end of the hurricane. … She had no visibility, she was in rolling clouds. At one point she thought her plane was upside down. … And then she remembered that little airport in some of the marsh lands in North Georgia. Air traffic control was telling her what altitude to have, what position to be in.”

They expected her to crash, but she made a safe landing.
Once they traveled the last leg of the journey to Albemarle, they jumped in a car and sped to Oakboro Skating Rink, where some 50 kids had gathered for Joy’s birthday party, Sheeks said.
Multiple sources spoke of Nettie’s reputation for speeding, but she had the ability to stay out of trouble. Sheeks described one incident that included a brush with the law.
“One Sunday, she was leaving her house in New London at 10:45. Driving the speed limit, it takes about 22 minutes at best. But Nettie could usually make it to our church from her house in 13 to 14 minutes,” Sheeks said.

“But leaving her house that late she knew she would have to fly low in her blue Lincoln. She would call me to tell me if she was going to be late. And on the phone, I would ask her: ‘Nettie, where are you?’ Her answer was always the same: ‘Pfeiffer College.’ We learned that meant she was pulling out her driveway,” Sheeks recalled.
This particular Sunday, a highway patrolman was backed into a driveway along Nettie’s route.

“The Highway Patrol officer barely saw Nettie go by,” Sheeks said. “But he tried to catch up with her. She ran through the four-way stop at St. Stephen’s Church Road and Old Beatty Ford. With his lights and siren blowing, he finally stopped her at the intersection of Ginn Road. Nettie remembers when she rolled down her window, this officer was not saying anything. He was almost dancing, moving his feet. He couldn’t be still,” Sheeks added.
“He wanted to know if he could see her flying license,” Sheeks continued. “And sure enough, she reached in her handbag and pulled them out. He couldn’t believe it, gave them back to her and just said, ‘Ma’am, I have never seen anything like this. Do you know you were driving 93 miles an hour before you got to the four-way stop? And you only slowed down to 50 miles an hour through the four-way stop.’

“She looked at him and said: ‘Officer, I’m the organist and choir director at Immanuel Lutheran Church, just a few miles from here. If you are going to give me a ticket, please meet me at the church and give it to me after worship. I have to get there. I am really late now.”

Sheeks said the officer looked down at the ground.
“Then he raised  his head and said: ‘Ma’am, just get out of my sight. Just go.’ Nettie thinks she spun gravel and tires when she pulled off.”
She did not tell fellow church members about the incident before worship. As she was late, they helped her with her robe, noticing she was flustered.
She had choir members look outside into the parking lot after worship to see if the officer was waiting on her.
He was not.