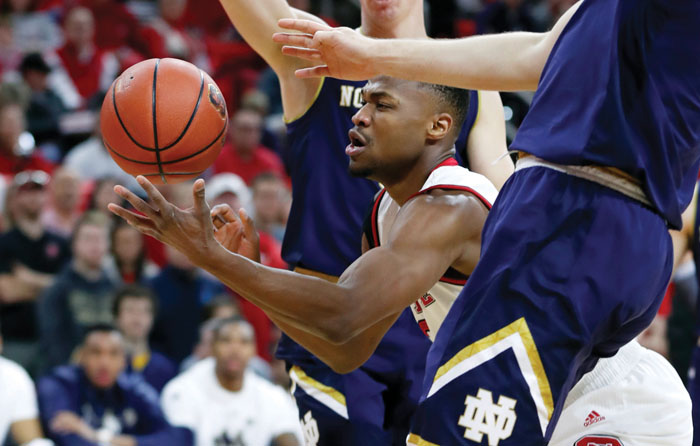 RALEIGH (AP) — North Carolina State didn’t squander the surge from an emotional rivalry win. The Wolfpack just had to wait a week to prove it.

There was no sign of a hangover, rust or anything else. Instead, Dorn and the rest of his Wolfpack teammates were simply dominant.

“I think it’s a statement to our focus,” Dorn said. “We’ve been a really focused group and this week we’ve been able to focus on some things to help us not come out lax and lazy since we beat Carolina and had a big win.

“Every game is important in the ACC, so you’ve got to be able to turn the page from one to the next.”

Coach Kevin Keatts said it was “a scary week for me” because he would’ve preferred to keep playing after the Wolfpack’s 95-91 win in Chapel Hill that included the team hitting 15 of 30 3-pointers. But he also said the time to regroup with two days off followed by extra time to refine things in practice helped by Saturday.

The Wolfpack claimed a 38-26 rebounding advantage and scored 21 points off turnovers. It amounted to a complete reversal of a 30-point loss to Notre Dame exactly one month earlier, down to the symmetry of N.C. State leading by 30 with 8½ minutes left.

“Give these guys credit,” Keatts said. “What a turnaround that we’ve had.”

Matt Farrell scored 16 points for the Fighting Irish (13-10, 3-7) after missing the past two games with a lingering ankle injury. Notre Dame fell behind 9-0 in the opening minutes and trailed by 19 in the first half on the way to a seventh straight loss.

“We just couldn’t get anything going early in the game and then you’re digging out of a hole the whole time,” Irish coach Mike Brey said. “I think they have a great vibe about them, and we don’t.”

Notre Dame: The Irish have been just trying to stay afloat with preseason Associated Press All-American Bonzie Colson roughly halfway through a projected eight-week recovery from a broken left foot. But they haven’t won a game in nearly a month. Worse, while the first five losses were all by single-digit margins, the past two — both in the state of North Carolina with Tuesday’s 22-point loss at Duke — have ended with ugly scores.

“They’re hanging in there,” Brey said. “When you have older guys sometimes they panic less. We are where we are in this thing. I’m very realistic. … We just try to get them back and see if we can play better at home.”

N.C. State: N.C. State played with a free-flowing confidence. It’s a good sign for a team trying to play its way into NCAA Tournament contention, both for the turnaround from the 88-58 road loss to the Irish and the maturity to follow an emotional rivalry win and week off with this type of response.

N.C. State: Virginia Tech hosts the Wolfpack on Wednesday night in another matchup of teams trying to improve their NCAA Tournament chances.