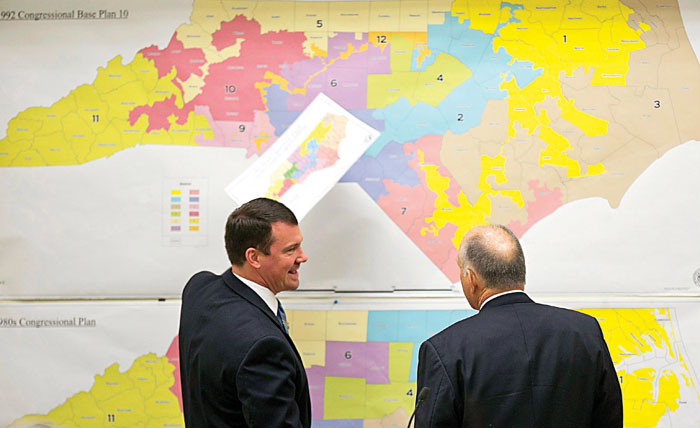 RALEIGH — As a decades-long proponent of redistricting reform, I welcome the recent and no-doubt heartfelt support for my cause from North Carolina Democrats. But like new converts to all sorts of righteous causes, they run the risk of letting exuberant devotion impair their practical judgment and common sense.

After the 1990 census, an alliance of the NAACP and the Republican Party challenged congressional and legislative maps drawn in a number of states, including North Carolina, because the maps diluted minority voting percentages in order to maximize Democratic victories. The alliance sought, and got, more districts with a majority or at least a plurality of black voters, which had the effect of increasing both minority and Republican representation in legislative bodies, at the expense of white Democrats.

While I recognized that white Democrats had previously abused their authority, I didn’t like the remedy of race-conscious districts. “As the pattern of the [George H.W. Bush] Justice Department collusion with civil-rights lobbies was repeated across the country,” I wrote at the time, “voters were presented with new, often incomprehensible political districts” like North Carolina’s infamous “snake” district that wriggled its way along I-85 from Charlotte to the Triangle. Having previously opposed racial preferences, Republicans had sacrificed “a coherent message on quotas” in an attempt to gain a short-term political advantage, I added.

Naturally, this argument made me immensely popular at all those GOP cocktail parties my critics often accuse me of frequenting.

After the 2000 census, North Carolina Democrats — shocked by the brief Republican control of the state house from 1995 to 1998 — set out to make sure the riffraff would never slip into power again. Their attempted gerrymander of the General Assembly was the most egregious in state history. Successful court challenges reduced the effect to some extent, but there were still several election cycles in which Republicans won a majority of the statewide vote for one or both chambers of the legislature and yet never secured a majority of the seats.

Remember during the 2000s when North Carolina’s left-leaning editorialists, civic groups, and other muckety-mucks screamed bloody murder about the illegitimacy of Democratic rule and marched on the capital to demand that the policies enacted by the Democratic legislature — such as sales-tax hikes and the state lottery — be rescinded?

Trick question. Even when these opinion leaders expressed support for redistricting reform in the abstract, they rarely made it a policy priority or described its Democratic opponents as cowards and tyrants.

I didn’t describe the Democrats that way, either. I tried reasoning with them. “You assume that you’ll be in power after the 2010 census, and can again draw the lines to suit your interests,” I said. “But what if you’re wrong? Shouldn’t you take out an insurance policy — redistricting reform — against a catastrophic political loss?”

Democrats didn’t. They should have.

Now, the same argument applies to the majority Republicans. I’m still making it. But it’s important for both sides to understand that gerrymandering isn’t the only structural problem North Carolina Democrats face.

Another big one is geography. Democratic-leaning voters have become increasingly concentrated in urban areas. That means that unless state lawmakers or redistricting commissioners gerrymander the maps in a different sense — drawing lots of squiggly lines and crossing lots of county and municipal lines — Democrats can’t count on new districts handing them control of Congress or the General Assembly.

Don’t take my word for it. A team of researchers just ran the numbers for the statistics website FiveThirtyEight.com. North Carolina’s current congressional breakdown is 10 Republicans and three Democrats. Under neutral standards of compactness and proportionality consistent with the state constitution and federal law, Republicans would still win a majority of seats in an average (non-wave) election, although the gap would almost certainly be smaller.

Let’s enact redistricting reform. It’s the right thing to do. But Democrats shouldn’t invest it with a mystical power it will never possess.

John Hood (@JohnHoodNC) is chairman of the John Locke Foundation.