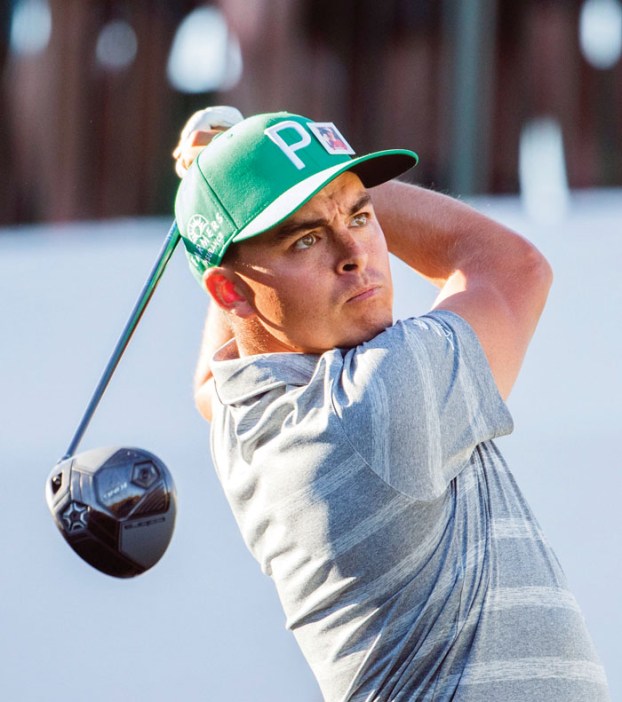 Rickie Fowler tees off on the 17th hole during the third round of the Waste Management Phoenix Open golf tournament TPC in Scottsdale, Ariz., Saturday, Feb. 3, 2018. (Patrick Breen/The Arizona Republic via AP)

SCOTTSDALE, Ariz. (AP) — Rickie Fowler birdied the last three holes to take the lead in the Waste Management Phoenix Open, overcoming a sluggish start in front of the largest crowd in golf history.

Justin Thomas went the other way, wasting a brilliant opening run with another late meltdown.

Fowler shot a 4-under 67 on Saturday to reach 14-under 199 with a round left at TPC Scottsdale’s Stadium Course, the fan-friendly layout packed with an estimated 216,818 fans on an 80-degree afternoon.

“I really made some good swings coming in,” Fowler said. “I just wasn’t getting the ball close enough and finally on the last few there I was able to get some good looks.”

Thomas left the course without speaking to the media.

Former Arizona State players Jon Rahm and Chez Reavie were a stroke back along with Bryson DeChambeau. Phil Mickelson was two shots behind, another former Sun Devils star riding the crowd support.

“It means a lot to me,” Mickelson said. “It’s very helpful and very important to my success. I think it’s been a big instrument in allowing me to get into the round and play and have fun and get out of the technical side.”

Fowler is trying to finally win in the desert. He finished a shot behind Hunter Mahan in 2010, lost to Hideki Matsuyama on the fourth extra hole in 2016, and tied for fourth last year.

“It’s just a matter of time,” Fowler said. “It would just be nice if it was sooner rather than later.”

The four-time tour winner began his birdie run with a 17-footer on 16 and connected from 9 feet on the par-4 17th and 18th holes. He also birdied 13 after playing the first 12 in even par with a birdie and a bogey.

“I just kind of had to fight through it,” Fowler said. “The swing was just a fraction off. It wasn’t bad, still made some good swings out there, but just had to try and get the ball in the short grass, get some looks and try not to make many mistakes.”

Rahm had a 65, playing alongside Mickelson and Schauffele for the third straight day. The 23-year-old Spaniard had five birdies in a seven-hole stretch on the back nine. He won two weeks ago in the California desert at La Quinta to jump to No. 2 in the world.

“I hit the ball really well off the tee, gave myself a lot of opportunities,” Rahm said. “But the main key today was my iron play. My game was a lot more accurate than the first few days and thanks to that I had a couple better birdie chances and a couple more went in.”

Reavie birdied the final two holes for a 67.

“To win tournaments out here is great, but to win one that you grew up going to would be very special,” Reavie said. “For me, this is a fifth major.”

DeChambeau shot 68. He lost the lead with a bogey on 17 after driving into the water.

“Tempo and rhythm,” DeChambeau said. “If I can control that and control my golf swing like I have been the past three days I think that I’ll be fine.”

“If you look at it, it looks like a very simple, solid bogey-free round, 5 under,” Mickelson said. “It was anything but that. I made some really nice up-and-downs to keep the round going and when I did hit some good tee shots and hit some good shots into the fairway I was able to get aggressive and make some birdies.”

Xander Schauffele and Daniel Berger also were 12 under. Schauffele shot 66, and Berger had a 68.

“I’m getting the full experience playing with Phil and Jon,” Schauffele said. “Especially when all of us are playing well.”

Fowler is wearing a pin on his hat with a picture of Griffin Connell, the area boy he befriended at the event who died last week at age 7. Griffin was born with a rare airway disorder.

“We actually had a ball go a little left on 11 today and we joked about it that Griffin took one in the chest and kept it out for us,” Fowler said.