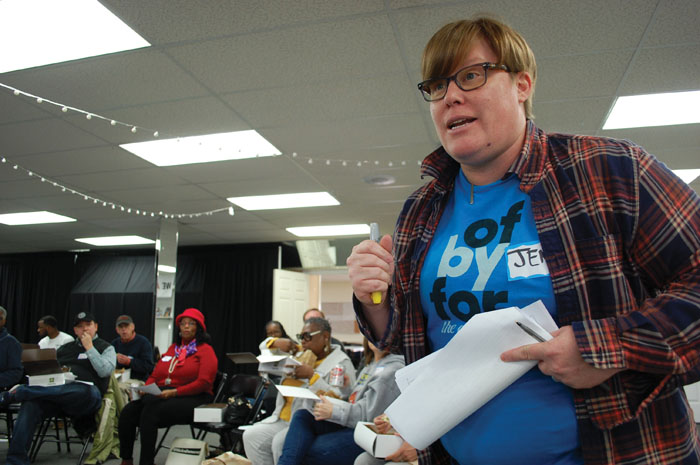 Democracy NC Communications Director Jen Jones addresses "We Are Democracy" workshop attendees and asks them how and why they are involved in voter rights issues. (Jessica Coates/Salisbury Post)

SALISBURY — As communications director for Democracy NC, Jen Jones believes in the power of good conversation.

But, as she said during her Saturday presentation at Mission House Church, good conversation doesn’t always mean getting along.

She used the example of two women who were deciding which way was the fastest to a destination.

Jones, a native of eastern North Carolina, said that same kind of conversation needs to happen more around dinner tables.

“When you sit at a kitchen table, how often do you argue? If you’re in my house it’s every time. Every time. Momma has an opinion, crazy uncle Bill has one and daddy always does. And on and on and on and then we work through it because we’re a family and a movement. We come to consensus…and we keep on trucking,” Jones said.

The 30-or-so attendees of the Saturday morning “We Are Democracy” workshop came to learn not just about how to communicate but also about what to communicate.

The topics of the day ranged from current political issues, such as gerrymandering and voter ID laws, to historical examples of political organizing in North Carolina.

Emily Perry, one of the leaders of Rowan Concerned Citizens, organized the event and invited Democracy NC to host the Salisbury workshop.

Perry said issues like gerrymandering affect “everything we say and do not say.”

“From the environment to voting rights, it affects every aspect of our life. But I just don’t think the average person, they’re not into politics every day,” Perry said. “People want a quick sound bite…and it’s not going to work with what we have going on now.”

Perry said that Rowan Concerned Citizens does not “push any candidate or ideology.” She said that gerrymandered districts affect people of every political orientation.

“How does one really, really get that person to speak for him or her if they are in, say, Charlotte and your person’s from, say, Wake County? So gerrymandering, it affects so much. We need people that understand our issues,” Perry said.

Pastor Anthony Smith of Mission House said he offered to host the event at his church because his congregation is “all about justice.”

“It’s about making sure that we have an informed citizenry,” Smith said. “For us as a church, we feel called to continually create a space that is consciousness-raising, where we’re constantly reeducating ourselves as citizens and our country to understand the history, where we come from.”

He said that, particularly in the last year, he has realized that the country’s political system is “fragile.”

Democracy NC is also a nonpartisan organization. Jones said in an interview that, “whether you’re a Democrat or a Republican, if you try to suppress the vote, Democracy NC will be there to try to push back.”

Republican lawmakers have since appealed the ruling to the U.S. Supreme Court, causing the court to put in place a temporary stay on the Jan. 9 ruling.

Jones said this likely means the congressional districts that the federal judges ruled to be unconstitutional will stay in place for another election cycle.

“As for the legislative districts, they are currently in a holding pattern as we wait to see if the (U.S.) Supreme Court also stays a lower court ruling saying they are unconstitutional,” Jones said.