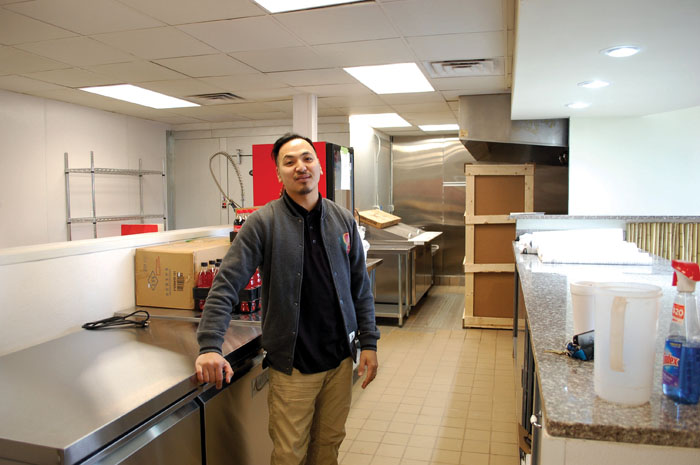 Yummi Banh Mi owner Scott Tang poses in the kitchen of what will be his new Vietnamese restaurant at 121 N. Long Street. (Jessica Coates/Salisbury Post)

After starting a successful Vietnamese food truck business three years ago in Charlotte, the RCCC grad has decided to return to Salisbury and open a brick-and-mortar restaurant.

“We’re kind of bringing old flavors and new flavors putting them into what we are doing now. My concept is really fast-casual. Everything’s cooked to order. You’ll pick your menu item out, we’ll get it on the grill or whatever you’re ordering,” Tang said. “We’re trying to bring a Chipotle style with Vietnamese food.”

Tang’s restaurant will have the same name as his Charlotte food truck — Yummi Banh Mi — and will be located next to his parents’ restaurant on North Long Street.

His mother and father have owned and operated Tokyo Express since 2000.

“I chose Salisbury…because I grew up here, my mom and dad are right next door. So, you know, I wanted to be close to them and help their family business, you know, our family business. I want to help them out as well as bring Salisbury new flavors,” Tang said.

Tang said that, when he graduated from CPCC with a degree in hotel and restaurant management in 2008, he planned to work at Tokyo Express and continue the family business.

But he said that a 2010 motorcycle accident changed everything.

“That’s how that progression happened to bring us into the food truck business,��� Tang said. “Because I was going to continue the family business with my mom and dad until I got into that motorcycle accident and it took me away from the restaurant.”

Tang said being unable to work for three months gave him time to reflect on what he wanted for himself.

“It gave me an epiphany to do something on my own, you know? I said, I’m going to go back to school, finish my degree and then my wife — she was my girlfriend at the time — she was on board. And we were having our first daughter. That’s when I was like, ‘OK, I’m opening this food truck. I’m doing it for us,’” Tang said.

Tang said one of the things he’s loved most about running a food business is watching people come together over meals. He calls food “a common denominator.”

“It doesn’t matter what culture you are, what religion, what background you’re from,” Tang said. “We all have to nourish ourselves with food and any culture can sit together as long as food is around.”

Tang’s menu will include what he calls four “staple” meals: pho, a Vietnamese beef noodle soup; banh mi, a Vietnamese sandwich on a French baguette; rice bowls and vermicelli bowls.

“So everything’s fresh, healthy for you. None of our food makes you lethargic. So that’s why I really want to bring a healthier option to Salisbury,” Tang said.

“(It’s) a creation that we’ve kind of made up. We’re doing French fries, your choice of meat…the banh mi garnishing — which is pickled daikon, pickled carrots, cilantro, cucumbers and jalapeños — and it’s all going to be diced and thrown on top and you’ll have a fried egg that sits on top of the fries and with the spicy mayo sauce,” Tang said.

“It’s a beautiful place and we can’t wait to show everybody. We put a lot of work into it,” Tang said.

He said he hopes to have the restaurant open by the end of February. When it does open, its hours will be 11 a.m. to 9 p.m. Monday through Saturday and 11 a.m. to 4 p.m. Sunday.

His food truck will continue to operate in Charlotte, but Tang said he’ll be at the Salisbury location every day.

“My crew is already a well-oiled machine down in Charlotte. And my wife oversees the food truck stuff as well,” Tang said. “So we’re a team. We’re a tandem.”