A century ago, a ‘Spanish Lady’ jilted Rowan, rest of world 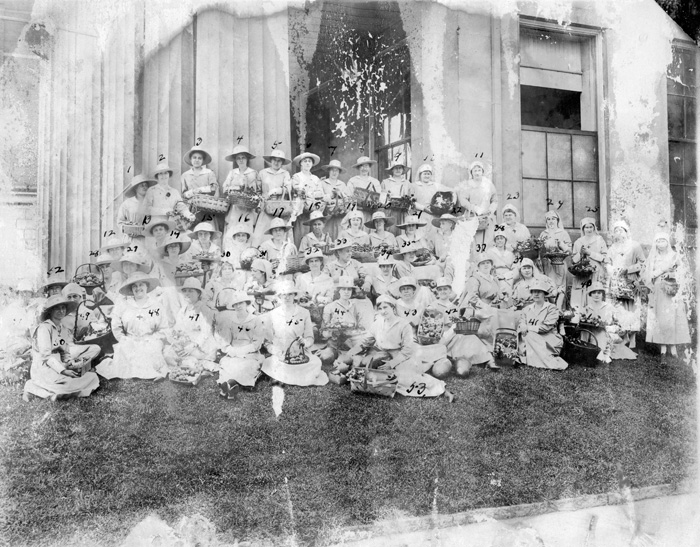 Photo courtesy of Betty Dan Spencer This photograph from 1918 shows American Red Cross nurses in Salisbury. The Red Cross volunteers, if not stricken themselves, would be pressed into action caring for the thousands of Rowan citizens who came down with the flu later that year. The Red Cross ladies are sitting and standing next to the Community Building, which today serves as the Rowan Museum. An emergency hospital was set up at the Community Building in 1918.

SALISBURY — As Rowan Countians battle another particularly hard flu season, much attention has retreated 100 years to the pandemic flu of 1918.

The scope and horror of that flu is unimaginable today. Over a year’s time, this “Spanish Lady” or Spanish influenza killed about 675,000 people in the United States, including 13,644 in North Carolina.

Estimates of the worldwide death toll vary widely, from at least 20 million to 50 million people — but maybe it was more. According to the Washington Post, more than two-thirds of the flu fatalities occurred in a 10-week period during the fall of 1918, and that’s the season it hit Rowan County the hardest.

Some researchers have referred to the 1918 flu pandemic as “the greatest medical holocaust in history.”

The actual number of flu deaths in Rowan County from 1918 are not known, but they had to be considerable given the reports of those afflicted and the extreme measures taken by local and state officials.

The late historian James S. Brawley wrote “the Spanish flu began to strike down Rowan citizens by the hundreds” in 1918.

“Beginning in late September 1918 and continuing throughout October,” Brawley continued, “over 2,000 cases were reported in the county and many more in the city of Salisbury. This threat offset the encouraging (World War I) news from Europe.”

Brawley said the local Red Cross chapter “changed fronts” to concentrate on the sick at home.

“This crisis called forth all the ingenuity and know-how that the organization could muster,” Brawley said. “Spanish flu did its work and passed over the county at November’s end, leaving thousands weak, some dead and others crippled for life.”

The urgency felt in this region was summed up in an Oct. 12, 1918, telegram from State Board of Health Secretary W.S. Rankin to Dr. C.W. Stiles of the Public Health Service office in Wilmington.

U.S. Sen. Lee S. Overman of Salisbury dispatched a similar emergency request to the U.S. Army Medical Corps, asking it to grant a temporary reassignment of Salisbury Dr. Frederick B. Spencer. He was needed back home to tend to flu victims, Overman said.

The request was granted and First Lt. Spencer left Camp Shelby and treated many of the afflicted here until the worst had passed.

It wasn’t until early October 1918 that Rowan County realized it was in the grips of what the newspaper innocently called “the grippe.”

On the state level, Gov. Thomas Bickett used the N.C. Council of Defense to call for a ban on public gatherings and instruct that all public offices be closed, effective Oct. 5.

Schools and churches were closed. Colleges followed suit. County fairs were canceled. Textile mills shut down. Some stores closed for lack of business.

Quarantines were ordered or self-imposed.

All political activities for the upcoming general election in November were put on hold.

A special meeting of Salisbury aldermen, school officials, county commissioners, physicians and others was held at the courthouse in early October. Rowan County’s health officer, Dr. A.J. Warren, could not attend because he already was stricken with the influenza.

A half-dozen different doctors at the meeting said they were seeing many flu cases and already being worked to their limits. Whole families were infected, they said, and the sick were trying to wait on the sick.

When that meeting ended, Salisbury was pretty much shut down, officially or voluntarily.

An order went out from the Rowan health board that Salisbury churches, schools, pool halls, movie houses, dance halls and all other “congregations of people ” be closed and “all loafing or loitering in and around the railroad stations be prohibited.”

If people had to ride streetcars, they were advised to leave the windows open. Parents were told to keep their children inside.

Every citizen, the health board said, was being named “a health committee of one.”

By Oct. 12, the orders were extended to the whole county.

The Salisbury Post gave this advice during the flu outbreak: “Don’t associate with the impolite or careless who spray your air with spit.”

Some streets in Salisbury were sprinkled with disinfectant to keep down the dust and germs. “There is a noticeable odor about this,” the newspaper said, “but it believed harmless, and it is believed much good will result.”

The Salisbury mayor asked motorists to “close all mufflers and observe a low speed in an effort to allay as far as possible all dust.”

Streets also were being flushed daily.

The town of Spencer established a penalty of $50 for any violation of its closing or congregating ordinance.

Salisbury’s two-year-old American Red Cross chapter established an “Influenza Emergency Committee ” and headed a community-wide effort that set up an additional hospital at the Community Building, relied on volunteer nurses, placed nurses in homes, cooked and served meals to the sick and went door-to-door checking on people.

The Whitehead-Stokes Sanatorium was filled to the maximum.

A soup kitchen was established in the basement of the courthouse, and Mrs. Edwin Gregory’s motor pool carried meals to homes. It also transported nurses and medicine.

People who were healthy enough gave food, milk and cooking utensils for the effort. A lot of soup was made.

Internal revenue agents were ordered to turn in their confiscated liquor so it might be used for medical purposes.

The Sparks Circus cut its performance season short and came to Salisbury for the winter.

Red Cross volunteers made masks and hemmed sheets for the hospitals. Doctors and nurses wore masks, but it was not unusual for others to wear them later to church or maybe even while playing bridge.

More than 200 men at Spencer Shops could not go to work because of the flu.

Druggists in both Landis and Kannapolis were stricken.

Near Woodleaf, a man and his sister died and weren’t found for several days.

Near Faith, a whole family fell ill. Nobody knew they were sick until the untended cows and pigs made such a racket that neighbors came to see what was wrong.

Local telephone operators were worn to a frazzle because of everybody on the lines, talking about the flu. The city asked Overman to see whether he could send more nurses to Salisbury.

In 1957, looking back on the whole ordeal, survivor E.D. McCall said it seemed he had more friends dead than alive in that horrid period.

George L. Burke, who worked at Spencer Shops, said “people were dying like flies.” Burke lost 30 days of work because of the flu.

In 1999, Mary Nicolson, who was 10 during the pandemic, recalled for the Post the scene at the Community Building:

“There were many sick people, most on pallets on the floor, so close together there was barely walking space between patients.

“Nurses and volunteers gave fluids and sponged them off to help bring the fever down, but there was little else they could do.”

Nicolson also recalled Dr. Spencer: “I remember Dr. Spencer taking care of the sick in Salisbury during that time. There was no medicine … absolutely nothing on the market that would cure flu. I’m not even sure they had aspirin available.”

Soldiers in crowded trains and at army camps were especially vulnerable.

Harry McKown, writing in the article “North Carolina and the Blue Death,”  said “at the railroad station that served Camp Greene near Charlotte, coffins were stacked from floor to ceiling, taking home the bodies of young soldiers who never saw the war.”

At least 20 percent of the state’s population was infected by the flu of 1918 and around a third of the world’s population.

As with every other state, “North Carolina experienced an unparalleled medical emergency as the extreme waves of sickness brought various degrees of suffering to different localities,” said Elon history professor David Cockrell in the N.C. Historical Review.

Cockrell noted that at the 1919 spring meeting of the N.C. Medical Society in Pinehurst, a moving dedication was given for the 17 doctors who died while treating patients with the flu.

“Surely, this has been a year to try men’s souls,” Dr. William M. Jones of Greensboro said.

There were no flu vaccinations available in 1918, but they might not have helped anyway.

The influenza was named the Spanish flu because the King of Spain, his prime minister and several other top officials came down with the disease. But there are different theories as to where it originated — some thought China, others said northern France, still others said Kansas.

The amazing thing was how quickly it spread, helped by a world war that had so many people in transit, within countries and across oceans.

This flu became lethal when it hit the upper respiratory tract and invaded the lungs with viral or bacteria pneumonia. When a person’s immune system responded too strongly, things went haywire and the stricken actually died from the immune system counterattack.

Victims coughed up blood from their lungs and bled from the eyes, ears and nose. Death came quickly as the oxygen-deprived body turned blue.

The 1918 flu did not discriminate, meaning it did not prey only on infants or the elderly.

If there was a silver lining to the pandemic, Cockrell said in the N.C. Historical Review, it was the impetus it created for newer medical facilities and technology in North Carolina. It also gave a boost to the state’s budding public health system.

“In retrospect,” Cockrell concluded, “it appears that the ‘Spanish Lady’ was not only an agent of death and sorrow that killed approximately 13,644 North Carolinians, but it also was a modernizing factor on the state’s social health services.”