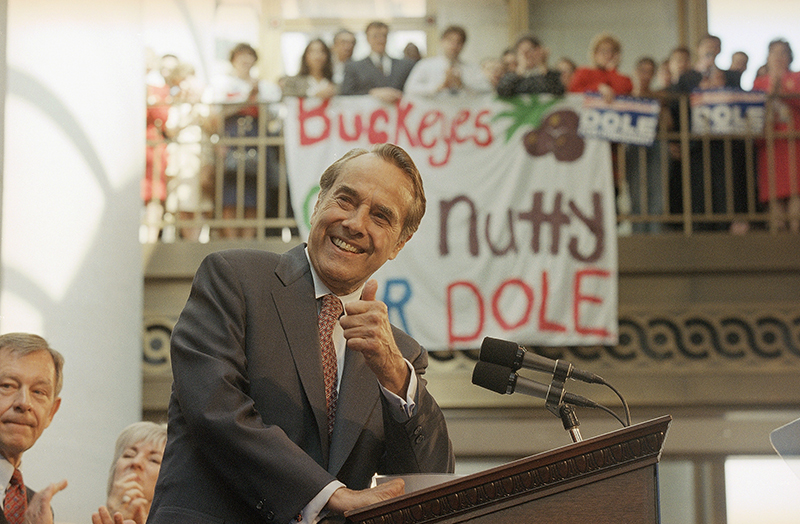 Sen. Bob Dole signals thumbs up to a group of World War II veterans listening to his speech at a presidential campaign stop in 1995 in Columbus, Ohio. (AP Photo/Doug Mills)

RUSSELL, KANSAS — As I set the cruise control on 80 mph and barreled west through the tawny folded Flint Hills and into the gray infinity of prairie Kansas, I realized that I might be the last political reporter for a long time to make the voyage to Russell.

And my reasons were not exactly crystal clear. I knew it had something to do with the State of the Union spectacle the night before, which left me feeling gloomy. Sure, it was nice to see that the president is learning how to read a speech. But the audience, ugh. Republicans leaping to their feet to cheer each banality as though it were news of the Nazi surrender, as Democrats sat sourly silent no matter what.

Really, Nancy Pelosi and Steny Hoyer? Not even a golf clap for the lowest African-American unemployment rate on record?

Experts blame “partisanship” for this lamentable state of affairs, but I think it is something worse, something deeper and more dangerous, than attachment to one party or the other. I worry that our leaders have become detached from the values that stand above party. Our problem is not an excess of partisanship; it is a deficit of patriotism.

That notion put me on the road to Russell in an act of homage to partisanship of a more positive variety. Scores, if not hundreds, of political journalists made the same trip from the early 1970s through the mid-1990s to tell the story of Robert Dole, the soda jerk from Dawson’s Drug Store whose family survived the Depression by renting their little home to oil-rig workers and camping in the basement. The strapping young star of the Russell High Broncos who took his aspirations for a career as a doctor to the University of Kansas, where he lettered on the football team before heading to Europe as a lieutenant in the U.S. Army, 10th Mountain Division.

Dole never became a doctor, because doctors need two good hands. He lost the use of his right arm on an April day in 1945, on a hillside in Italy, in a hail of German machine gun fire. Instead of Dr. Dole, there was Rep. Dole, Sen. Dole, Republican Party Chairman Dole, Senate Majority Leader Dole, the GOP’s nominee for vice president in 1976 and for president 20 years later.

You don’t chair a major party, lead its Senate caucus or win its nominations without being a partisan through and through. Dole could be sharp, even acidic, in his attacks on the Democrats: He once characterized the nation’s conflicts in the 20th century as “Democrat wars.”

But no less a statesman than Abraham Lincoln observed that partisanship is the natural condition of a self-governing people. In his eulogy for his political hero Henry Clay, Lincoln said: “A free people, in times of peace and quiet — when pressed by no common danger — naturally divide into parties. At such times, the man who is of neither party, is not — cannot be — of any consequence.”

A healthy partisanship, however, is in service to values that transcend party. Just as athletes believe the clash of competition strengthens both sides to the greater glory of the sport itself, patriotic partisans see political combat as a give-and-take that builds rather than destroys.

Republican as he is, Dole could not demonize Democrats or seek their destruction because he and they had been forged by a common danger. When Dole looked across the Senate aisle, he saw Democrats he first met in an Army hospital. Hawaii’s Daniel Inouye lost his right arm leading a charge against German guns in Italy. Michigan’s Philip Hart had his right arm badly wounded by an exploding artillery shell on Utah Beach.

They were a generation that understood their disagreements were not ends in themselves. They debated not for the sake of winning the argument but for strengthening the country. I fear that the base and bitter politics now prevailing make it difficult for today’s veterans — such as Democrat Tammy Duckworth of Illinois and Republican Tom Cotton of Arkansas — to act with the same broad view.

These thoughts, plus 240 miles, landed me in Russell. Time has not exactly stood still. There are a lot more giant windmills and a lot fewer oil pumps in central Kansas than there used to be. But the little house still stands on North Maple Street. The marquee of the Dream Theater still dominates Main. The taciturn locals still flock to Meridy’s cafe, where the buffet still groans under the weight of home-fried chicken, ham and beans, and corn bread.

The talk over lunch is still heavy on weather and grandchildren, and mercifully light on politics. I saw no bumper stickers as I drove around town, no campaign slogans in storefront windows. Just a lot of American flags snapping smartly in the ever-present prairie breeze.

David Von Drehle is former editor-at-large for Time Magazine, and is the author of “Rise to Greatness: Abraham Lincoln and America’s Most Perilous Year.”