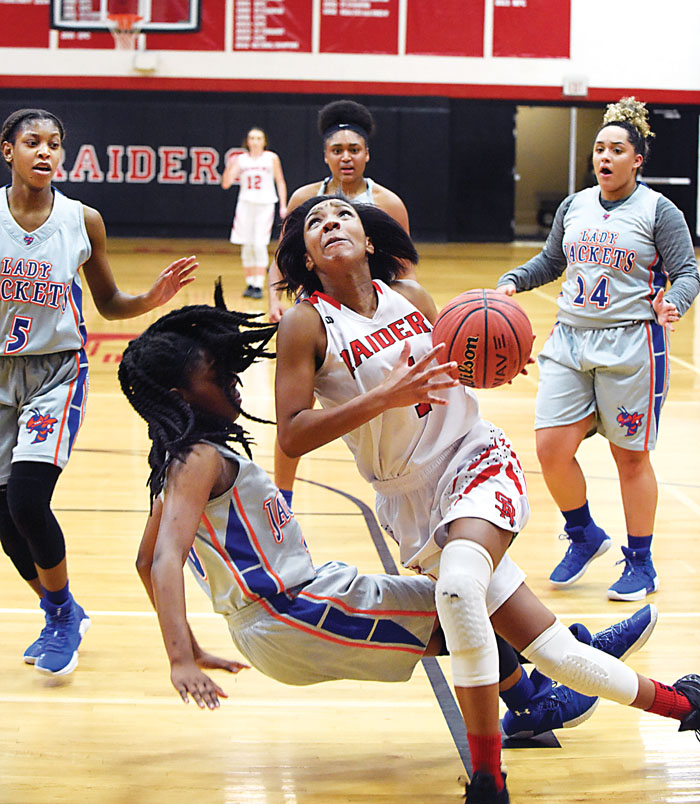 Wayne Hinshaw/for the Salisbury Post ... South Rowan’s Janiya Downs, center, is fouled by Lexington’s Jakayla Rose, left, while driving to the basket during Friday night’s game in Landis. Downs scored 28 points to lead the Raiders to a 62-29 victory, their sixth straight.

LANDIS — South Rowan’s girls basketball team continues to operate in the shadows — and that’s just how it likes it.

The veiled Raiders have opened February will a full head of steam, trouncing Lexington, 62-29, for their sixth consecutive Central Carolina Conference victory.

“Yeah, we’re under the radar, but it’s just a basketball game,” third-year coach John Davis said Friday night, moments after after South (15-7 overall) improved to 12-4 in league play. “That’s what it’s all about. They work on fundamentals in practice and come out and play their best. Right now, we’re doing this.”

And doing it very well. No one played better than Janiya Downs, the junior guard who scored 28 points — including 19 in the first half — despite picking up two personal fouls in the first quarter.

“She’s smooth,” Davis said. “She sort of reminds me of Sleepy Floyd back in the day. Sleepy was laid back, but you look out there and he’s got like 30 points. You just say, ‘Where’d that come from?'”

Defense ruled the day as South forced 21 Lexington turnovers and limited the guests to nine field goals, including none in both the first and fourth quarters. The Raiders surrendered only 44 points in wins against Oak Grove and Lexington this week.

“They’re a pretty good team,” said Lexington coach Toccara Tatum. “We just weren’t disciplined and able to capitalize on their mistakes. And in the first quarter, we did not attack their zone. We didn’t understand how to penetrate a zone.”

The Yellow Jackets used Harvin’s 11-point third quarter to draw within 46-27. South responded with a knockout fourth period and led by as many as 34 points when Corriher scored on a fastbreak layup with 2:42 remaining.

Downs had her most prolific outing since dropping 26 points on Salisbury four weeks ago.

“I didn’t realize I had so many (points),” Downs said. “All I was doing was trying to get to the basket.”

Perhaps the most intriguing mystery is that the Raiders are nestled in fourth place, trailing Salisbury, Ledford and East Davidson in the CCC.

“If you’re not first in the conference, you’re last,” Downs added. “I can’t believe we’re fourth.”