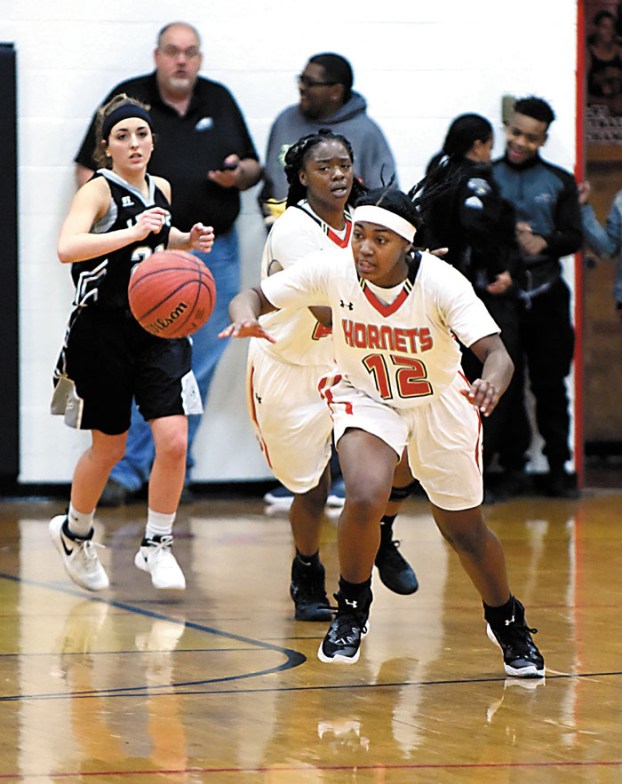 Salisbury's Anayia Fulson scored 21 points in a loss to East Davidson on Friday night. Photo by Wayne Hinshaw, for the Salisbury Post

By Carlton Hurt
Lexington Dispatch
THOMASVILLE — With one starter suspended, only eight players dressed out and a short bench to begin with, being tired simply wasn’t an option for East Davidson’s girls basketball team Friday night.
With a chance to forge a huge logjam at the top of the Central Carolina Conference standings, the Golden Eagles gutted out a nerve-wracking, 45-41 decision over Salisbury in a game that had a state-playoff atmosphere.
East used just one sub the entire night, had four players log all 32 minutes and got a boost from a trick defense to knock off the Hornets and improve to 14-2 in the league, 20-2 overall.
“This was a great win,” said senior post player Megan Hamilton, who scored 12 points and was a beast on the boards with 13 rebounds. “This puts us in a really good position for the conference championship. We didn’t really have any people to sub in the post tonight, so we all needed to be in there.
“And you get tired playing the triangle-and-two defense. It was really hard but we kept ourselves going.”
Brooke Anders paced the Eagles with 14 points, but she had to work hard for them. Her easiest two came with the most pressure. After a frantic final minute and a half, which saw East miss the front end of two one-and-one free throws and Salisbury miss both charity tosses on a shooting foul that could have tied things up, Anders calmly swished a pair of foul shots with 5.6 seconds to go to turn a slim 43-41 lead into a victory.
“Wow, just a real team win,” said East coach Don Corry. “Megan Hamilton stopped up big tonight. Her and Keely (Sentell) just played really well inside. Brooke and Bailey Grimsley did great guarding their two best players on defense.
“We just wanted to rest while we could on offense and hustle on defense. I simply told them right before the last quarter that you can’t be tired.”
Corry had been tinkering with the triangle-and-two since a mid-December setback to Salisbury in the  teams’ first meeting.
“Bailey played the (Bryanna) Troutman girl pretty well on defense when we played down there,” Corry explained. “So I had been tinkering with it. I decided to do it and had Bailey play Troutman and Brooke take (Maria) Capito. We guarded their best post player and best guard and just wanted to see if the other three can beat us.”
East carved apart Salisbury’s full-court press early and led, 20-10, with a minute gone by in the second quarter.
But the rest of the night was a struggle with turnovers and fatigue.
Troutman’s baseline jumper through a double team capped an 11-2 spurt by the visitors, which tied things at 24-all.
Anders got free for a 3-pointer to give East a 30-26 advantage midway through the third, but again the Hornets went on a run, this time a 7-2 rally, keyed by Anayia Fulson. Salisbury took its first lead into the fourth and found itself with a 39-36 advantage with 4:27 left, following a coast-to-coast layup by Fulson, who finished with a game-high 21 points.
East, though, knotted things up moments later on a clutch 3-pointer by Skylar Grubb, setting the stage for a tense ending.
Each team was only able to score one field goal over the next two minutes, but Hamilton converted inside to give the home team a 43-41 lead with just more than two minutes remaining.
The Eagles were successful in running off nearly a minute in their spread offense before Salisbury fouled Grimsley.
But Grimsley missed the one-and-one and moments later, so to did Grubb, leaving the door open.
Fulson was fouled while shooting with 7 seconds left, but she, too, missed both free throws.
Anders finally sealed the deal with her foul shots.
“We just didn’t play good,” said Salisbury coach Lakai Brice. “We didn’t rotate well out of our diamond press to start the game and they got a big lead. But as bad as we played, I still thought we had a chance to pull it out. East Davidson just wanted it more than we did.”
Notes: Salisbury is now 14-2 in the CCC, 18-3 overall. Salisbury, East and Ledford are all tied for first and East travels to Ledford on Tuesday. “We’ve got one week left (in the regular season) and we still don’t know who is going to finish one, two or three,” Corry said. … The Hornets host North Davidson Tuesday before playing South Rowan next Friday. The Raiders have beaten Salisbury twice this season.
SALISBURY (41) — Fulson 21, Troutman 8, Robinson 6, Glenn 4, May 2, Capito.
E. DAVIDSON (45) — Anders 14, Hamilton 12, Grubb 8, Sentell 7, Grimsley 4.
Salisbury      10    14    9   8   — 41
E. Davidson  18   8      6   13  — 45
You Might Like