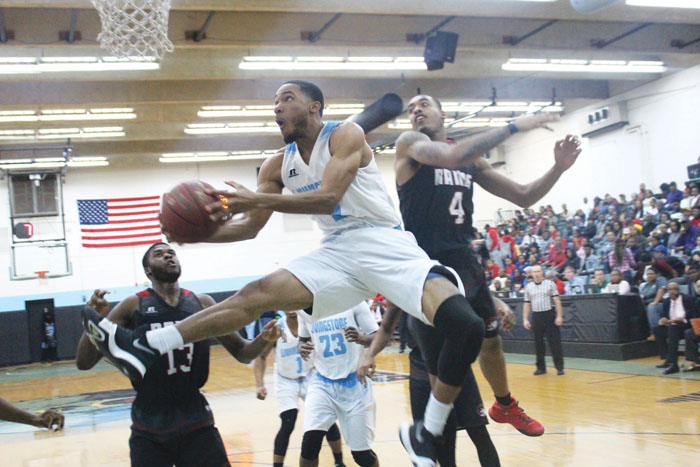 SALISBURY — Sometimes the best defense is an opponent that can’t shoot straight.

That’s what benefited the Livingstone men’s basketball team in Saturday’s 79-73 CIAA victory over visiting Winston-Salem State. The guests made only 16-of-35 free throw attempts and extended a winter-long slump.

“Coach said if they would have made their free throws, we would have been in a world of trouble,” said Livingstone senior Sam McClendon. “We’re very fortunate to walk away with a win.”

“We’re steadily growing,” coach James Stinson noted, after the Blue Bears won for the fourth time in five games. “And collectively, they’re starting to buy in. We keep trying to systematically wear people down by utilizing our numbers. That’s a gift we have, the ability to tire people out. After a while, they’re shots don’t fall and free throws bounce out.”

WSSU (4-16, 2-9, 0-5) — the pre-season favorite to win the division — remains locked in the basement largely because it missed 11 free throws in the first half and eight in the second.

“It’s kind of contagious,” said Rams’ coach James Wilhelmi. “When we’re making them, everyone’s making them. When we’re missing, the ball rolls the other way. Frankly, missed free throws, especially when you miss two of them, that’s like turning the ball over.”

If there’s anything a team that has endured eight straight losses and hasn’t won since last Dec. 18 needs, it’s more turnovers. Yet WSSU relinquished possession 20 times and shot a pedestrian 38.2 percent from the field.

“Livingstone is a gritty team,” junior Willie Crandell said after contributing 16 points and eight rebounds for the Rams. “They do a lot of little things that other teams don’t do. They never stop fighting, they bump you down low and they get second chances on the boards. Credit their defense. They kept the pace and got more stops.”

The score was tied five times in the first half before LC surged to a 36-33 lead at the break. The second half brimmed with small pleasures for the Blue Bears — beginning when Malik Smith drove the lane for a three-point play in the opening minute. And when 6-foot-9 freshman Navar Elmore elevated for a backwards, over-the-shoulders lay-in just seconds later, the boisterous matinee crowd went into a frenzy.

“They have a lot of length,” Wilhelmi acknowledged. “When you’re going against 6-8, 6-9 guys every possession, all that length gets to you.”

LC was out-rebounded 59-44, but Lydell Elmore — Navar’s twin brother and another 6-9 high-rise — more than compensated. Five days after netting a season-high 19 points in a victory at Elizabeth City State, he recorded five of Livingstone’s eight blocked shots.

“Five blocks?” Stinson queried. “I think that’s a record for this place.”

Livingstone was paced by senior guard Cameron Burhannon, the Indianapolis native who shot 7-for-13 from the field and scored a game-high 22 points. He also blocked a shot in the second half. “Finally got one,” he said. “I asked the twins for advice. They said it was all about timing.”

McClendon, a senior out of Detroit, had 10 points, nine rebounds and seven assists. His dribble-drive along the left baseline resulted in a monster dunk that put Livingstone ahead by seven points early in the second half. “Offensive rebounds, put-backs, he just plays hard,” Stinson gushed. “He refuses to lose. And he’s like a coach on the court, the way he understands situations.”

WSSU got as close as 52-50 when Crandell twisted down the lane for a layup with 13:12 remaining. LC’s answer came nine minutes later, when Ramel Belfield drained a 3-ball from the left corner, Roger Ray hit a 14-foot jumper from the left side and Ray followed with a pair of free throws that made it 69-59 with 3:58 to go.

“It all starts with believing in ourselves,” McClendon said. “Everyone’s accepting their role. Today we all realized how big this game was and how much we needed to win.”

NOTES: WSSU played without high-scoring guard Robert Colon, the CIAA’s top freshman last season. He’s averaging 16.1 points-per-game, but a “coach’s decision” left him on campus. … Jamel McCallister shot 7-for-12 from the floor, scored 16 points and yanked down 11 rebounds for the Rams. Teammate James Rucker II had a 12-and-12 double-double. … Livingstone also shot 38.2 percent from the field but converted 22 of its 30 free throws. Ray finished with 14 points despite an atypical 3-for-14 shooting performance. He knocked down his 76th 3-pointer of the season in the first half. … The Blue Bears visit Shaw University on Wednesday and host Fayetteville State next Saturday. … Wilson Cherry was honored at halftime for his 35 years of service to the Livingstone athletics program. … The victory was the 196th at LC for Stinson, as he nears 200. He has 468 career wins, counting his time at Barber-Scotia.