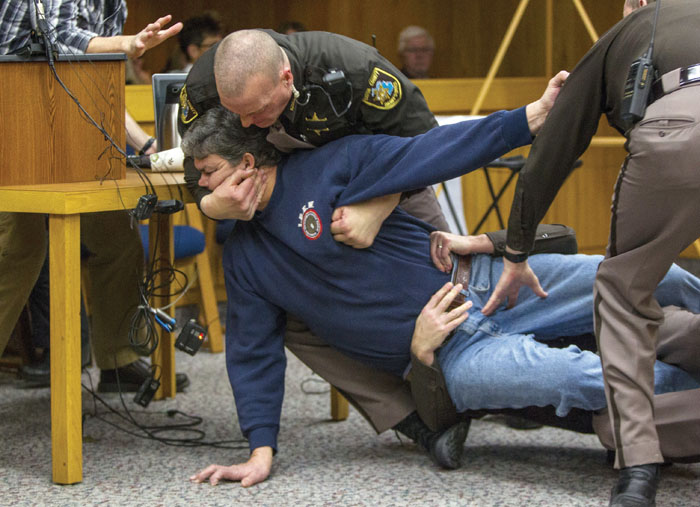 By David Eggert and Mike Householder

CHARLOTTE, Mich. (AP) — A distraught father seething over sexual abuse suffered by three daughters tried to attack former sports doctor Larry Nassar in a Michigan courtroom Friday after a judge rejected his request to confront the “demon” in a locked room, a stunning rush that reflected the anguish felt by parents who trusted him with their children.

Randall Margraves was blocked by an attorney, tackled by sheriff’s deputies and hauled out of court. He later apologized, saying he had lost control. Eaton County Judge Janice Cunningham said there was “no way” she would fine him or send him to jail under her contempt-of-court powers.

“I don’t know what it would be like to stand there as a father and know that three of your girls were injured physically and emotionally by somebody sitting in a courtroom. I can’t imagine that,” the judge said.

Nonetheless, she added, it is “not acceptable that we combat assault with assault.”

The incident occurred during the third and final sentencing hearing for Nassar, who has admitted to sexually assaulting girls under the guise of medical treatment. This case focuses on his work at Twistars, an elite gymnastics club southwest of Lansing.

Nassar, 54, already will spend the rest of his life in prison. He was sentenced last week to 40 to 175 years in prison for assaults at Michigan State University and his home and was ordered in December to spend 60 years in a federal prison for child pornography crimes.

Nassar pleaded guilty to molesting nine victims in Eaton and Ingham counties, but the courts have been open to anyone who says she was assaulted during his decades of work at Michigan State, Twistars and USA Gymnastics, which trains Olympians. More than 200 accusers so far have spoken or submitted statements in the two counties, and at least 80 percent have agreed to be publicly identified.

Margraves’ dramatic move occurred after he listened to two of his daughters speak in court for 10 minutes. Lauren Margraves, a college student, said her parents were “filled with regret” because they took three daughters to see Nassar for sports injuries.

“I see the look in their faces and I know they want to be able to do something but they can’t,” she told Nassar. “The guilt they have will never go away. All this is because of you.”

Her father then stepped up and asked the judge if she would grant him “five minutes in a locked room with this demon.” Cunningham declined and also turned down his request for “one minute.” That is when Randall Margraves rushed toward Nassar.

There were gasps and tears in the courtroom. Assistant Attorney General Angela Povilaitis turned to the gallery and told families to “use your words,” not violence.

“This is letting him have this power over us,” she said. “We cannot behave like this.”

During a return to court, Margraves told the judge that he just snapped. He said he had not known what exactly his daughters were going to say about their abuse.

“I look over here and Larry Nassar’s shaking his head, no, like it didn’t happen. … I’m embarrassed,” Margraves said of his conduct. “I’m not here to upstage my daughters. I’m here to help them heal.”

About 30 more people spoke in person, by video or had statements read after the incident. The case will end Monday with final remarks from the prosecutor, defense and Nassar, followed by the judge’s sentence. Nassar faces a minimum of 25 to 40 years in prison.

At a news conference, Margraves repeated his apology and insisted he’s “no hero.”

“My daughters are the heroes, and all the victims and the survivors of this terrible atrocity,” he said.

Melissa Alexander Vigogne, who traveled from France to speak, said she was surprised that an attack had not been attempted earlier.

“It’s not that that’s how we should respond. But it’s truly understandable — the amount of pain that we’ve all gone through,” Vigogne said outside court.

Sheriff Tom Reich said his officers will investigate what happened in court and send a report to the local prosecutor.

The judge started the day by addressing comments made by a Nassar lawyer who said she had doubts about the large number of women and girls who say they were assaulted by Nassar. Cunningham called Shannon Smith’s remarks “unfortunate” and said Nassar did not authorize them.

Smith told Detroit radio station WWJ that it is “really unfortunate” if some people stepped forward only because of all the recent attention. Nassar released a statement saying Smith’s comments were a distraction and that his accusers’ remarks “have pierced my soul.”

Many of Nassar’s accusers have blamed Michigan State, USA Gymnastics and the U.S. Olympic Committee for not doing more earlier to stop him. The USOC announced Friday that it hired a law firm to conduct an independent investigation. And the coordinator of the women’s national team for USA Gymnastics, Valeri Liukin, said he was stepping down.

AP reporter Ed White in Detroit contributed to this story.