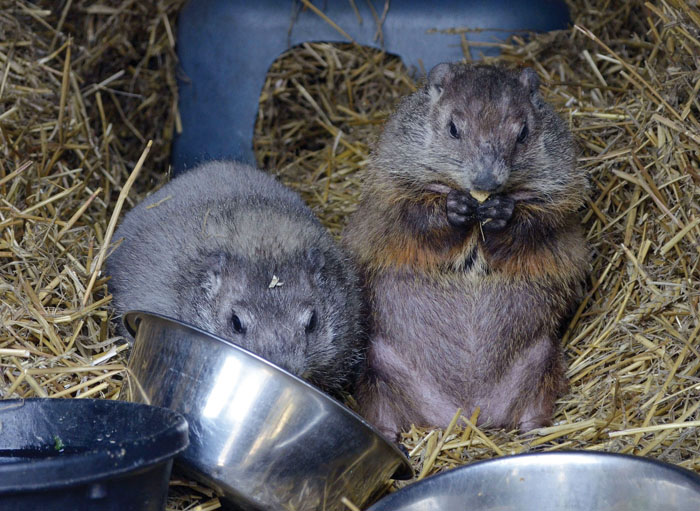 SALISBURY — While Punxsutawney Phil faced off with his shadow Friday morning, groundhogs at Dan Nicholas Park saw little more than the backs of their eyelids.

The pair, named Tribble and Shadow, opted to stay out of the winter chill. Instead, they nestled in dirt and straw burrows in their outdoor enclosure.

April Edmonds, animal keeper and part-time manager at the park’s nature center, said that was to be expected.

“They are true hibernators,” she said.

But it could make them even more reliable seasonal indicators than Punxsutawney.

Groundhogs like those used for national predictions are usually kept indoors, said Edmonds. That means they are less likely to enter normal hibernation cycles than those who stay outdoors.

Outdoors, groundhogs spend months overfeeding and constructing underground shelters from the cold. When winter comes, they disappear within, seldom emerging until the weather starts to warm.

Dan Nicholas staff members find Shadow and Tribble good indicators of when spring is on its way.

“There were a couple of years where it started to get really warm and (our groundhogs) … were out by mid-February,” said Edmonds. “We just knew, that’s it. Winter is over.”

Tribble and Shadow have been in their burrows for weeks. The last time Edmonds saw either was New Year’s Day.

“I just remember thinking, ‘What are you doing out? It’s so cold,'” Edmonds said.

The center continues to offer the pair food throughout the winter — just in case, in true North Carolina fashion, the weather turns unseasonably warm.

Their food includes different types of lettuce, vegetables and a small amount of fruit.

Edmonds said the most important part of their diet is something called rodent block, which helps keep their constantly growing teeth filed.

Shadow and Tribble came to the nature center as baby brothers in 2012. Two local girls rescued and raised them after they were orphaned.

The concept sounds nice, said Edmonds, but it took away their capacity to be rehabilitated. Shadow and Tribble are now far too comfortable around humans.

Edmonds said injured birds are put through “mouse school” in which they are tested on their ability to catch a mouse in an enclosed space.

“If they can’t, then they’re not releasable,” she said. “They wouldn’t be able to hunt on their own.”

With information like this, Edmonds said she is known as the owl expert of the park. She also works to train animals: a bobcat and groundhogs — whenever they’re awake.

She’s training them to target, which means touch a stick to their nose. From there, Edmonds said she wants them to be able to station in a certain area, stand up to show their bellies and let her touch their paws. This will help with health checks, she said.

She trains them with chopped peanuts, for which they have an affinity.

Dan Nicholas’ Rowan Wildlife Adventures, which includes the Barnyard and Nature Center, is open all winter. Admission for ages 10 and older is $1 and for ages 9 and younger, 50 cents.