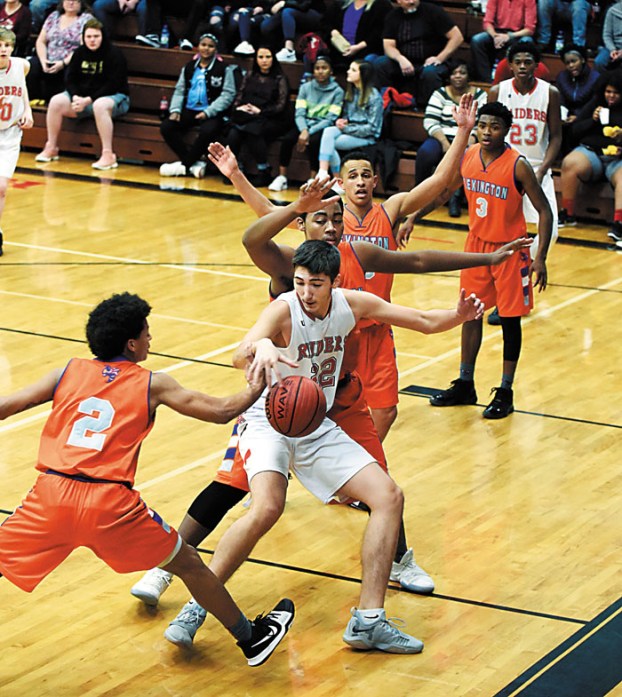 LANDIS — The smiles South Rowan’s boys basketball team arrived with Friday were turned upside down by the end of the night.

In a match that featured more spit than polish, the Raiders had their modest, three-game winning streak snapped by visiting Lexington.

“Mostly, it was unforced turnovers … that’s what killed us tonight,” coach Andre McCain said, after South dropped a rugged 71-62 decision. “You’re not going to beat anybody with 22 turnovers. And they know that.”

South (7-15, 7-9 CCC) yielded 32 points off giveaways and finds itself on the outside looking in, entering the regular-season’s final week — tied for sixth place in the league standings with two games to play. Lexington (12-8, 11-5) is tied for second.

“We’re in good shape,” winning coach Jon Weavil said after the Yellow Jackets beat South for the second time. “This was one of our better defensive efforts, especially in the first half. We held them to five 3-pointers. Last time, I think they threw in eight of them.”

The Raiders were led by senior Bailey Graham, who shot 7-for-13 from the field, buried four 3-pointers and scored 18 points. Teammate Tyrese Shaver went 5-for-7 from the floor and had a double-double (11 points, 10 rebounds), but wasn’t exactly turning cartwheels afterward.

“We have a lot of things to work on before we go into the conference tournament,” Shaver said. “They’re all things that can be fixed, but it will take time and practice.”

South’s problem became evident after it took a 15-12 second-quarter lead on a runaway layup by Jordan Oglesby. Lexington senior Cameron Peoples opened and closed a decisive, 10-0 scoring spree with 3-balls from the right side.

“When we see that coming, we need to stop it fast,” Graham said. “It was still one of our best defensive games, but (Peoples) just caught fire and we couldn’t touch him.”

South spent the rest of the game playing catch-up, but never did. It trailed by eight points at the half and by as much as 47-34 when Jayron Roberts completed a three-point play with 3:24 remaining in the third quarter. A 10-2 South spurt trimmed the deficit to five late in the period before Roberts scored on a back-door layup from the left block with just four seconds on the clock.

“That was frustrating,” McCain said. “You can’t stay glued to your man. Someone has to slide over to help.”

In the fourth quarter, South edged within 60-54 on Shaver’s stick-back with 2:33 to play, only to watch Lexington’s Saafir Craven strip the ball from Dillon Kluttz and drive the length of the court for a layup seconds later. Graham threaded a three from the left side in the final minute, closing the gap to five, before Peoples sealed the deal with four straight free throws in the last 23 seconds.

South shot 50 percent from the field (27-for-54), but too many opportunities were lost to sloppiness.

“In the second quarter and second half, we went to a full-court press and trap,” Weavil said. “That sped the game up — and that led to a lot of turnovers. We finished a lot of them with run-outs on the other side.”

All that hustling got Graham’s attention. “We could be a running team like them,” he said. “But first, we’ve got to learn to stop teams that do that. Tonight’s a loss, and that’s never good, but we feel like we improved.”

NOTES: Lexington placed four scorers in double figures, shot 47 percent from the field and won the rebounding battle, 36-29. … The Jackets beat South, 90-76, when the teams met on Dec. 15. … South wraps up its CCC season with games at Central Davidson on Tuesday and at home against regular season champion Salisbury on Friday.

Staff report MOUNT ULLA — Fans got more than they bargained for in the West Rowan gym on Friday. The... read more