No. 1 UConn too much for Gamecocks 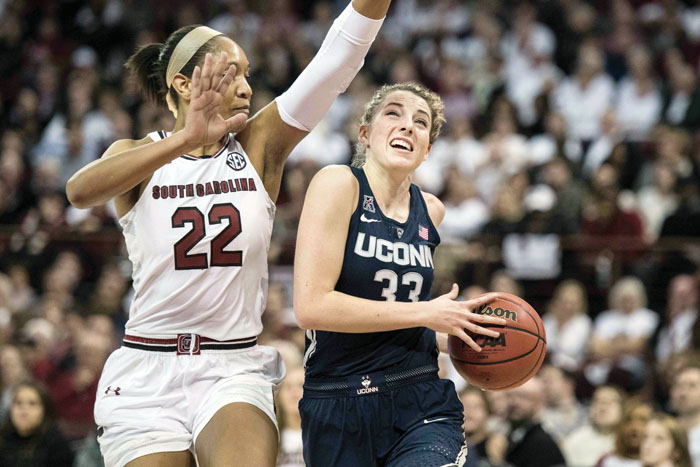 COLUMBIA, S.C. (AP) — UConn coach Geno Auriemma watched his top-ranked Huskies put on a show at South Carolina that even he couldn’t believe.

Kia Nurse had 23 points and Katie Lou Samuelson added 20 as No. 1 UConn routed the defending national champion Gamecocks 83-58 on Thursday night. The demolition included a 29-8 second quarter as the Huskies hit 11 of 18 field goals to turn a tight game into a runaway.

That’s high praise from the longtime coach who passed his 1,000th win this season and saw his players mark themselves as overwhelming favorites for the program’s 12th national title this season.

“I guess in a sense, yeah, you could think that way,” Nurse said of the NCAAs. “The coaches have done a good job of getting us to think about what’s next. But obviously you take the positives away from every win.”

There were plenty of them for UConn.

Gabby Williams hit six of eight shots for 14 points and 14 rebounds. Napheesa Collier had 19 points and five blocks. Nurse made five of the Huskies’ 11 3-pointers and their defense held South Carolina All-American A’ja Wilson to 4-of-18 shooting, although she ended with 14 points, 16 boards and six blocks.

The Huskies opened things up early to lead 53-24 at the half on their way to a 21-0 start for the fourth time in five seasons. They extended their NCAA mark with their 48th straight road win and, if anyone needed more evidence, marked themselves the clear favorite for another NCAA title.

The Gamecocks had hoped All-American A’ja Wilson, a sellout crowd and a super-charged atmosphere at Colonial Life Arena might rattle the Huskies. Instead it was UConn showing it was more than up to the challenge.  Nurse hit two straight threes and Samuelson added one of her own as UConn broke on top 13-4 in the first four minutes.

The Huskies poured it on with a 19-2 start to the second quarter that ended any hopes of a South Carolina surprise.

A brief Gamecocks rally cut a 33-point lead down to 21 in the third quarter, but it was nowhere near enough.

Wilson, the two-time defending Southeastern Conference player of the year, struggled from the field, going 4 of 18 for 14 points. She also had 16 rebounds and six blocks.

Wilson was recruited hard by UConn before picking the Gamecocks and lost to the Huskies all four of her college seasons.

“It’s kind of hard when you’re in a hole like that to dig your way out,” Wilson said.

Freshman Bianca Jackson had a career high 20 points for the Gamecocks.

UConn: The Huskies look too fast, too strong, too talented to have any serious challenges right now. Of course, almost everyone thought that a year ago before Mississippi State stunned the women’s basketball world with its semifinal victory at the Final Four — a win that set a championship final that South Carolina wound up winning. One thing’s certain, UConn won’t lose if it plays like it did in the opening half the rest of the way.

South Carolina: The Gamecocks’ motivation against UConn has obviously changed since capturing the NCAA crown last April. No longer were the Huskies a barometer of how close South Carolina was to the top of the mountain. Minus three starters from that title squad in Alaina Coates, Allisha Gray and Kaela Davis — all in the WNBA — the Gamecocks don’t have the firepower outside of Wilson to stay with Huskies. They’ll get another big test Monday night at No. 2 Mississippi State, a team that went 0-3 against the Gamecocks in 2017 including losses in the SEC Tournament and NCAA Tournament finals.

UConn’s Geno Auriemma and South Carolina’s Dawn Staley both have national title programs and Staley has succeeded the Huskies coach as head of the U.S. women’s national team. They also both grew up in the Philadelphia area and share a love of the Philadelphia Eagles, who play for a Super Bowl crown on Sunday. “I think I’ve heard the Eagles’ fight song way too much,” UConn forward Katie Lou Samuelson said.

South Carolina coach Dawn Staley said Wilson shouldered too much of the load in the loss to UConn without others stepping up. Starting guards Doniyah Cliney and Tyasha Harris combined to shoot 3 of 16 for eight points. “You’re not going to beat a team like UConn with that,” Staley said.

South Carolina completes its No. 1-No. 2 double when it takes on second-ranked Mississippi State on Monday night.