Mum’s the word for Hall of Famer Izzo 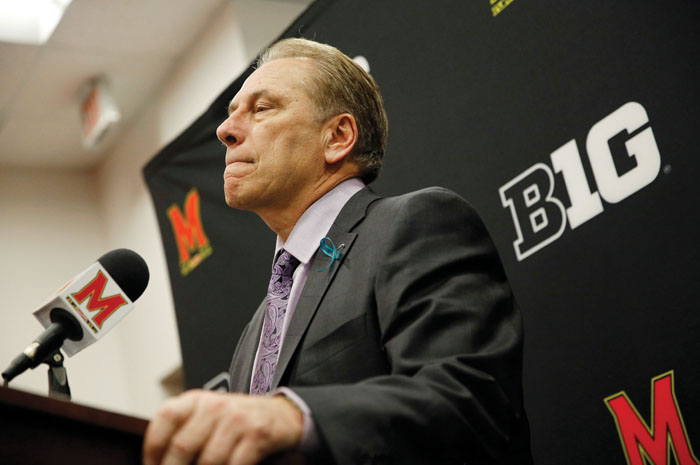 FILE - In this Sunday, Jan. 28, 2018, file photo, Michigan State head coach Tom Izzo speaks at a news conference after an NCAA college basketball game against Maryland in College Park, Md. Izzo has been regarded as one of the most frank and accessible in sports. Larry Nassar and an ESPN report has changed his ways in front of reporters, leaning on mostly scripted statements to dodge questions he can't or doesn't want to answer right now. (AP Photo/Patrick Semansky, File)

EAST LANSING, Mich. (AP) — Until recently, Michigan State’s Tom Izzo had been regarded as one of the most frank and accessible coaches in sports.

A lot has changed.

The campus the coach has called home for three-plus decades is dealing with a crisis over how the school handled allegations against disgraced former sports doctor Larry Nassar . And an ESPN report has stirred the Spartans’ powerhouse basketball and football programs by questioning how Izzo and Mark Dantonio have dealt with allegations against their players.

Dantonio came out strong last week, insisting he has always cooperated with authorities when dealing with cases of sexual assault. Izzo’s responses have been mild , a word that hasn’t been used much if at all to describe the fiery coach.

Izzo insisted he has not being advised by anyone to stick with his scripted response, saying he always has and always will cooperate with investigations and repeating those same words when pressed by reporters.

“I’m going to do what I think is right,” Izzo said Wednesday night after the fifth-ranked Spartans beat Penn State for their fifth straight win. “I’m sorry. I really am. I watch a lot of TV and I see on shows that everybody thinks everybody has the right to ask a question. And, I’ve always believed that. I’ve always been a fan of the media. But I’ve got to have my rights, too.

“When the time comes, I’ll be able to speak out.”

There’s a good chance that will not be Saturday night after Michigan State visits Indiana.

As painful as his press conferences may look and sound, Izzo could choose to wait until after the season to answer questions about how he handled allegations against former players and a student assistant coach years ago to avoid the situation becoming even more of a distraction for his program.

Publicly and privately, Izzo has vowed to weather the storm and help “the healing process,” that includes supporting survivors of Nassar’s sexual abuse. Nassar, who worked at Michigan State and also was a doctor for the U.S. women’s Olympic gymnastics team, is facing the rest of his life in prison for molesting girls and young women under the guise of treatment.

Izzo was the best man at Hollis’ wedding and they were roommates when both were starting their careers at the school decades ago. Izzo has declined to share his thoughts about one of his best friends losing his job, and has refused to share how he’s feeling in general.

Behind the scenes, his players insist the pressure on Izzo isn’t negatively affecting the way he prepares and leads the team.

Michigan State point guard Cassius Winston said Izzo has been fired up whenever he has seen him over the last week or so.

“He’s using all that emotion and using that to motivate us. He’s coming every day to practice full of energy, full of life. Before the game, he was more amped up than anybody on the team.”

Izzo looked as if he hadn’t slept much if at all last week when he faced a sea of reporters and TV cameras following a home game against Wisconsin. A couple days later, he didn’t appear to be any more rested or at ease following a win at Maryland. But Wednesday night, he seemed to be at peace with deflecting questions he doesn’t want to answer right now.

“I’m just going to handle it by keep working, keep my mouth shut and do my job,” Izzo said. “And when the time comes, I’m going to address the things that I need to address.”