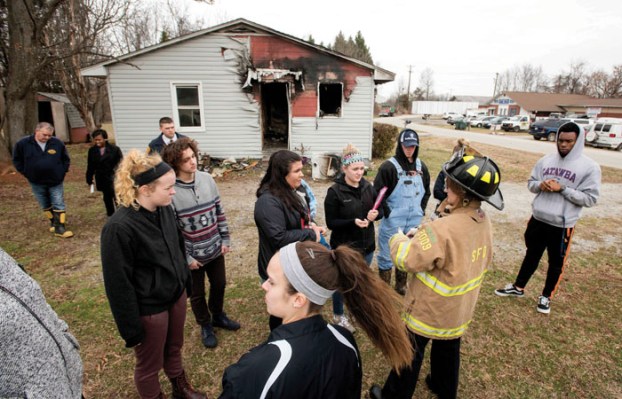 Kimberly Boling (right), a fire Inspector with the Salisbury Fire Department with a background in criminal justice, teaches a class at Catawba College involving detecting arson. Boling's class went out to a site of a house fire on Rowan Ave. to take a first hand look at a fire scene to attempt to determine possible causes of house fires. Jon C. Lakey/Salisbury Post

SALISBURY — Three months after a family lost their belongings and a cat in a fire at a rental property, the small home is being used to help future investigators learn to figure out what causes such tragedies.

Students in the Catawba College criminal investigations class used the home at 925 Rowan Ave. on Thursday for a mock arson investigation.

Instructor Kimberly Boling set up the walk-through at the home after connecting with property owner Richard Goodman. Boling is also a fire and life safety instructor with the Salisbury Fire Department as well as a fire inspector.

In previous classes, students had been looking at the mechanics of fires. They were given a scenario and had to collect “evidence” from the scene. The evidence would be examined during another class and students would determine the cause of the fire.

Boling created the scenario: Witnesses see smoke and fire coming out of the front windows as well as two people running from the home.

She gave each student a hard hat, gloves, a mask and goggles. Before the walkthrough, Boling placed a few items in the home and shoveled a pathway so students could have easier access to different rooms. The home was left in the same condition it was after the real fire investigation in October.

The students walked through the home with retired fire investigator Mark Thompson and Salisbury Fire Engineer Jacob Thompson. They asked questions about what they found inside. They divided into groups of three and recorded their evidence on a Post-It note and placed it in a plastic sandwich bag.

Once they talked about their findings and put their collected evidence into a large envelope, they were interviewed by a Post reporter about what they’d discovered.

Boling said she wanted it to be as real a scenario as could be, including an interview with a reporter that would be likely after a real fire.

Senior Prentice Clark is majoring in sociology, but he thought criminal investigations would be an interesting class. Tyler Garner is a sophomore music theater major but was curious about the topic because his mother has a criminal justice degree. He said he simply wanted to see what it is all about.

Malorie Ritchie is a psychology major with a minor in criminal forensic studies.

“I was interested in the investigative process,” Ritchie said.

Molly Sue Harmon is a junior majoring in pre-law and wants to go into criminal law as a career. Robert Robinson, a junior, said he has a good relationship with Boling and it sparked an interest in criminal investigations and criminal law.

Chase Bowers is serious about pursuing a law enforcement career. The senior is majoring in administration of justice and is currently interning at the Rowan County Sheriff’s Office. He hopes to parlay his internship into a job and, later in his career, he has aspirations of becoming a U.S. marshal.

Alexis Newbold is also pursuing a law enforcement career. An intern with the Salisbury Police Department, she is majoring in administration of justice with a minor in communications.

At the end of their project, the students theorized different causes for the mock arson, ranging from a candle, a cigarette and food cooking in the oven.

Seeking out the homeless: Rowan Helping Ministries leads effort to get a snapshot of homelessness