6 takeaways from The Memo 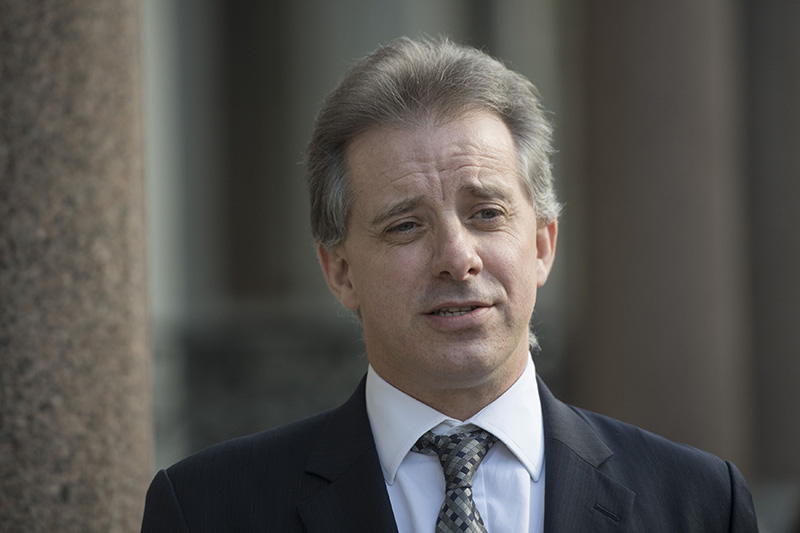 Christopher Steele, the former MI6 agent who set-up Orbis Business Intelligence and compiled a dossier on Donald Trump, in London where he spoke to the media for the first time in March 2017. Photo by Victoria Jones/PA Wire

WASHINGTON — Republicans claim that when the FBI got a secret court order to spy on Trump campaign foreign adviser Carter Page during the election, it relied “extensively” on information from a politically motivated ex-British spy who was being funded by Democrats to find dirt on Donald Trump.

And it didn’t share those political motivations with a secret court that ultimately authorized the surveillance.

That’s the gist of the declassified memo written by House Republicans, which Trump agreed Friday to release despite concerns from the FBI and Justice Department that this memo is inaccurate and risks undermining source-gathering methods and ongoing investigations.

Here’s a quick breakdown of the allegations in the memo and the outstanding questions surrounding it.

1. The dossier funded by Democrats formed “an essential part” of the FBI’s application to spy on Trump campaign aide Carter Page.

Getting a secret court to approve spying on an American citizen is no small thing. It requires an application that former FBI director James B. Comey has said is “thicker than my wrists.” Former FBI agent Asha Rangappa told The Post that a Foreign Intelligence Surveillance Act application (referred to as “FISA application” in the memo) likely involved a dozen people’s insights and intelligence. This memo alleges the dossier put together by ex-British spy Christopher Steele was “an essential part” of that application.

Page was also on the FBI’s radar at least since 2013, so it would be remarkable if the dossier, which was shared with the FBI in late 2016, was the essential piece of information used for the application.

Outstanding questions: Given this seems to be the key point of the memo — the FBI relied on a politically motivated document to spy on a U.S. citizen — its description of how important the Steele memo was to the FBI’s surveillance of Page is vague.

How much is “an essential” part of the application? The FBI officials have told the Post that the memo was far from the only piece of intel it used to get a court to spy on Page.

2. Senior Justice and FBI officials knew Democrats were funding this research, but didn’t tell the court of the party’s role.

This memo alleges that the FBI and top Justice officials knew Democrats were funding the dossier, but it did not share that with the court that approved the original surveillance order or any of the four renewals. (A surveillance order must be renewed every 90 days, where FBI officials must convince federal judges the warrant is yielding relevant and legitimate information to the FBI’s case.)

Outstanding questions: Does who funded dossier really matter to the court? The company behind the dossier testified to Congress that Steele’s report isn’t fake, was not politically motivated and did not set out with the intention to smear Trump, least of all to find collusion.

3. The FBI should have terminated a contract with Steele after he spoke with the media.

The rest of the memo attempts to provide corollary evidence that Steele was not a reliable source for the FBI.

Here, House Republicans argue that the FBI hired Steele during the campaign as one of its informants and then didn’t let him go after he talked to the media — including a September Yahoo News article. The FBI only cut him off after he disclosed his relationship with the FBI in an Oct. 30 Mother Jones article.

“Steele’s numerous encounters with the media violated the cardinal rule of source handling — maintaining confidentiality — and demonstrated that Steele had become a less than reliable source for the FBI.”

Outstanding question: It’s not immediately clear how this impacts the information that made its way into the FISA warrant.

4. Steele had his own political bias that the FBI “ignored or concealed.”

Here’s another reason Steele’s information can’t be trusted, House Republicans allege: He had it in for Trump.

The memo alleges that Steele told a top Justice official he “was desperate that Donald Trump not get elected and was passionate about him not being president.” The memo says that Justice official told the FBI of the “clear evidence of Steele’s bias,” but it was “not reflected in any of the Page FISA applications.”

Outstanding questions: It’s an open question whether Steele’s bias matters if the information he provided was sound.

Talking about how the FBI got the information is a distraction from what agents found, Jens David Ohlin, a dean at Cornell Law University, told The Post earlier this week: “Consider an analogy. Say there’s a murder in a small town and the police aren’t making any progress. In frustration, the family of the victim hires a private investigator who turns up evidence and gives it to the police. What should the police do? Answer: They should act on it if there’s something there.”

5. At least two FBI officials had a clear bias against Trump

At the very end of the memo, its authors also mention FBI officials Peter Strzok and Lisa Page, who were having an affair and texted frequently about the investigation, including exchanging pro-Clinton texts and expressing anti-Trump sentiments.

This memo also alleges the FBI needlessly mentioned former Trump foreign policy adviser George Papadopoulos in its application to spy on Page. Papadopoulos later pleaded guilty to lying to the FBI about his conversations with Russians during the campaign.

Outstanding question: Unless House Republicans are alleging the entire FBI was biased against Trump, it’s not clear how this impacts the FISA application that ultimately let them spy on Page. Strzok was a key member of the team investigating Russia interference in the 2016 election, but he was reassigned after the FBI discovered these texts.

6. Republicans released this memo because “the public interest in disclosure outweighs any need to protect the information.”

Legal experts, Democrats, intelligence officials, and even some Republican members of Congress have heavily criticized this memo for needlessly declassifying information to prove a political point. The process this memo went through to get released is highly unusual, say former congressional staffers.

The White House pushes back on that characterization by saying “the public interest in disclosure outweighs any need to protect the information.” White House lawyer Donald McGahan wrote that in a letter attached to the memo.

Outstanding question: The memo has yet to answer why Trump’s handpicked head of the FBI disagrees.