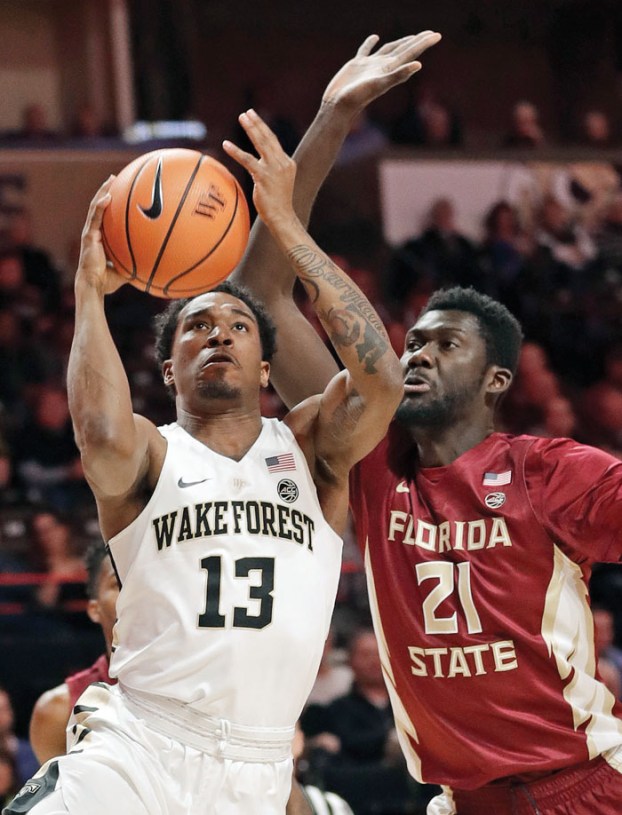 Brandon Childress hit the go-ahead free throws with 44.1 seconds left and Wake Forest did just enough down the stretch to hold off Florida State 76-72 on Wednesday night, snapping a seven-game skid.

The Demon Deacons (9-13, 2-8 Atlantic Coast Conference) had to fight to the final seconds to earn their first win since beating Syracuse at home on Jan. 3. And they sealed this one only when Doral Moore — who came into the game shooting 45 percent from the line — hit a free throw with 2.3 seconds left to make it a two-possession game.

“Having fun, sticking together is one thing we talked about coming into this game,” said Keyshawn Woods, who had 15 points for the Demon Deacons. “And I think we did that.”

Four of Wake Forest’s seven losses had come by double-digit margins. The Demon Deacons also lost 72-63 at North Carolina State on Jan. 18 after giving up a game-ending 11-0 run, following a pattern of late-game fades in December losses to Tennessee and North Carolina.

But after trailing by 10, Wake Forest got a big 3-pointer from Woods just before halftime for a jolt of momentum. Then the Demon Deacons shot 52 percent after halftime to play from in front for much of the final 20 minutes.

The trick was closing it out. They did that, barely.

“I felt like they’ve been wanting to break out of it,” coach Danny Manning said. “We were just able to break through, to be honest with you.”

The Seminoles (16-6, 5-5) trailed by six midway through the second half before twice pushing ahead late, first when Braian Angola knocked down jumper despite being 0 for 7 from the field at the 1:49 mark.

Then, after two free throws from Bryant Crawford (19 points), Phil Cofer scored inside at the 1:06 mark for a 72-71 lead. But FSU couldn’t hang on, with Cofer missing two free throws with 29.5 seconds left after Childress’ go-ahead shots and M.J. Walker missing a tying 3-pointer in the final seconds.

“This is typical ACC,” FSU coach Leonard Hamilton said. “On any given night, anybody can beat you in this league, and they did a much better job over the full 40 minutes than we did.”

Florida State: The Seminoles had won three straight league games to put themselves squarely in the middle of the traffic jam far behind No. 2 Virginia in the league standings. But they squandered an opportunity for a road win, going 0 for 7 from behind the arc and scoring just four points off turnovers in the final 20 minutes.

Wake Forest: The Demon Deacons entered this one in desperate need to stop its descent. It didn’t help that starting senior guard Mitchell Wilbekin was out with an ankle injury, too. And yet, the Demon Deacons were finally able to have what Crawford described as “a sigh of relief that we finally got out of that slump.”

Wake Forest: The Demon Deacons host No. 20 Clemson on Saturday.