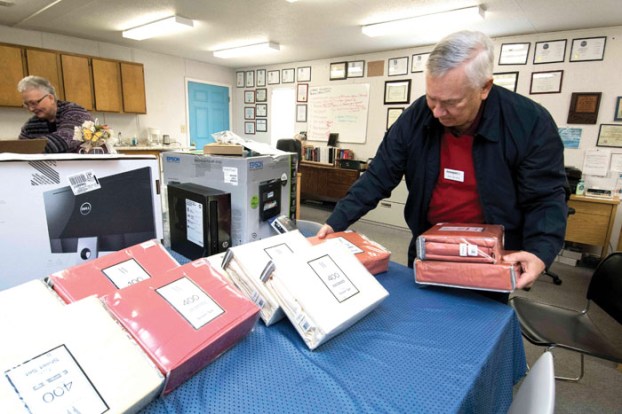 Capstone Recovery Center was the beneficiary of good will from Innospec and from John and Agnes Struzick after Capstone offered up a wish list in the past Christmas season. Jon C. Lakey/Salisbury Post

Ramirez, who heads the nonprofit organization that provides transitional housing for women, and her husband, Dr. Oscar Ramirez, who provides counseling services, have for the past few years included a wide range of items on her list.

John and Agnes Struzick saw that list and knew Ramirez, so they brought her three cases of toilet paper and paper towels. A month after their first round of giving, the couple — along with a $2,000 check from Innospec — were able to pay for the toilets and their installation, sheets, and a computer and printer.

“I knew Miriam and I knew the work they do. They are touching lives,” John said of Capstone Recovery Center.

Innospec, a Salisbury chemical company, has a program called Innospec Cares that offers a two-to-one match for employee contributions, Struzick explained. While Struzick and his wife covered the cost of the computer, printer, sheets and toilet installation, the company will cover the cost of ceiling repairs.

The couple said they purposely looked at the Sharing the Season list to see where they could be helpful.

“The Lord has blessed us, and we are trying to pay it forward,” Struzick said.

He said people should not be afraid to tackle something on the list.

The Struzicks encourage others to pick an organization to help in some way.

SALISBURY — If they were grading President Donald Trump’s State of the Union address, students in the Presidential Politics class at... read more