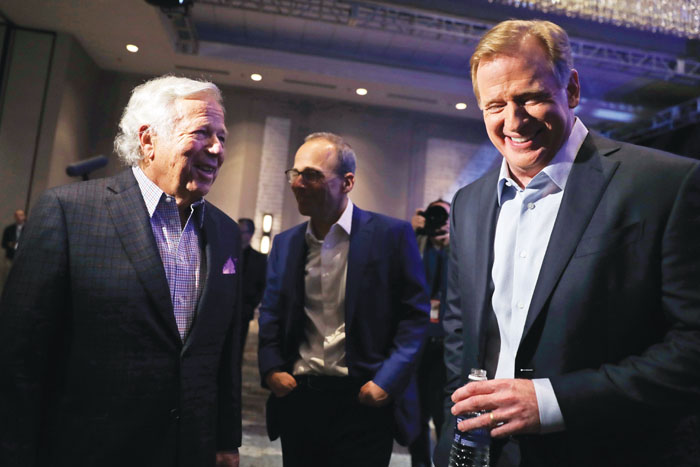 MINNEAPOLIS (AP) — Roger Goodell wants to see the mystery of the NFL’s catch rule solved, and he’s ensured that the process has begun.

The commissioner said at his annual Super Bowl news conference Wednesday that he personally sees that rule as the most obvious to address.

Asked about the scrutiny that NFL officiating came under this season, Goodell said “on the catch/no catch rule, we need to find a rule we think will address that. We certainly need to get this rule right so everyone can appreciate.”

Goodell recently spent three hours with former players, including Pro Football Hall of Famers, going over 150 plays. He said there were many good ideas offered, but as for the specifics of what should be a catch, there was little consensus.

“There were a lot of people with different perspectives and lot of disagreement in the room,” he said.

So the competition committee will dive into not only this rule, but perhaps refining the rulebook.

“I would like to start back, instead of adding to the rule, subtracting the rule. Start over again and look at the rule fundamentally from the start. Because I think when you add or subtract things you can still lead to confusion. These rules are very complex; you have to look at what the unintended consequences are of making a change, which is what the competition committee, in my view, does so well and with so much thought.

“Clearly, the catch/no catch has had a lot of discussion. I won’t tell you there won’t be controversy (in the future), but we need to get to a better place.”

He added that there were more video replay interruptions in 2017 “and I think we can look at that. How do we make the game more attractive with less stoppages is one of the things we focus on. How do we use replay to ensure correcting obvious mistakes but making sure it doesn’t interrupt the flow of the game.”

Goodell noted that in his 36 years working in the NFL, officiating always has been in the spotlight. Recently, because of advances in technology, the attention has ratcheted up significantly.

Goodell revealed that the league has hired an independent investigator to look into claims of sexual and racial misconduct in the workplace against Carolina Panthers owner Jerry Richardson.

Former U.S. attorney Mary Jo White will lead the investigation. White has led similar investigations in other fields, including a recent one at the University of Rochester.

Richardson stepped away from day-to-day operations after allegations surfaced and is seeking to sell the team. The NFL has said it didn’t pressure Richardson to sell based on the allegations.

Goodell said he wants the team to remain in Carolina and believes most of the other owners do, as well.

“I am sure that is a question many of our owners will ask,” Goodell said of the Panthers staying in Charlotte under new ownership.

—announced that the Rams will play a home game in Mexico City against the Chiefs. Until the new stadium in Los Angeles is ready in 2020, the Rams are likely to spend one home game a year elsewhere.

—reiterated his stance that it’s not the NFL’s place to get involved in whether Colin Kaepernick gets a chance with another team. “Clubs have to make their own decisions as far as who’s on their roster,” he said.

Kaepernick, who sparked the protests involving the national anthem early in the 2016 season, wasn’t signed for the 2017 season following his release in San Francisco.

The comments from Goodell came a day after Philadelphia Eagles receiver Torrey Smith said Kaepernick not getting a chance with another team “kind of falls in the category of an injustice in itself.”

As it relates to roster decisions, Goodell said the NFL won’t “get involved in that in any way.”

—referred to the recently created owners/players committee on social justice when asked any questions about protests during the national anthem, expressing optimism the NFL and its players are on the proper path.

—said he was aware of the plans to relaunch the rival XFL in 2020, but had been too busy to look at details. Goodell emphasized that the NFL constantly looks at spring football options if they will improve opportunities to reach the NFL.