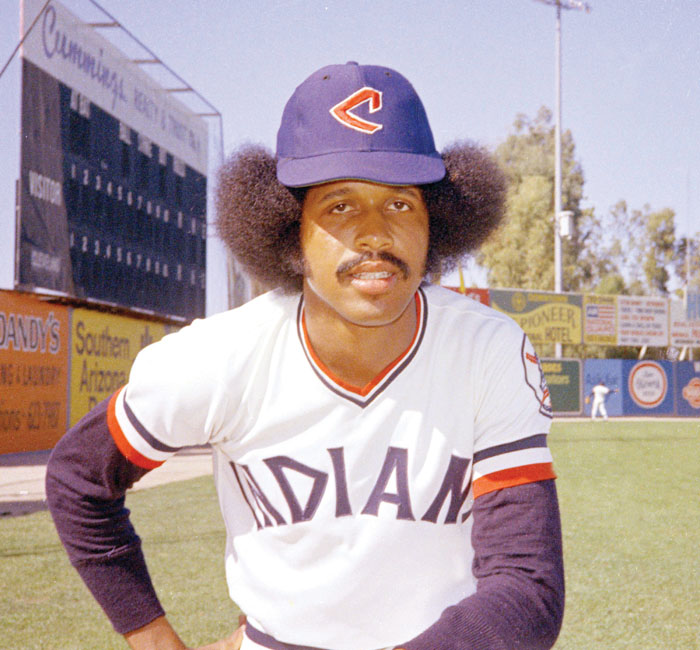 NEW YORK (AP) — Oscar Gamble, an outfielder who hit 200 home runs over 17 major league seasons and was famous during his playing days for an Afro that spilled out of his helmet, died Wednesday of a rare tumor of the jaw. He was 68.

His second wife, Lovell Woods Gamble, said he was diagnosed with a benign tumor, ameloblastoma, about nine years ago. It became ameloblastic carcinoma in 2016 and he had the first of several operations that August. Gamble, who lived in Montgomery, Alabama, entered UAB Hospital in Birmingham on Jan. 22 and died there early Wednesday. His wife said he never chewed tobacco.

A left-handed hitter known for the crouch in his batting stance, Gamble had a .265 batting average and 666 RBIs while playing for seven big league teams.

Hall of Fame reliever Goose Goosage remembered Gamble insisting that Yankees bat boys sprint out so Gamble could hand over his lumber before circling the bases on home runs.

“He’s just one of the funniest guys that I’ve even been around, even professional comedians,” Gossage said. “We all knew he was going through some tough times, and it’s kind of frustrating just to have to sit back and watch one of your close friends go through what he went through.”

Gamble spent seven seasons with the New York Yankees in two stints. He had an endorsement deal with Afro Sheen but had to trim his hair to comply with owner George Steinbrenner’s grooming policy when he joined the Yankees for the 1976 season.

“Pete Sheehy told him no uniform until the haircut,” Steinbrenner said in 1991, referring to the Yankees’ longtime clubhouse man. “I said, ‘Oscar, I’ve got a barber.’ They brought this guy in and he butchered him. Absolutely butchered him. I was sick to my stomach. I told Oscar, ‘It looks good,’ but I thought to myself it was absolutely the worst. There were blotches in his scalp.”

After helping win the AL pennant, Gamble became expendable when New York signed Reggie Jackson, and Gamble was traded to the Chicago White Sox for Bucky Dent. While with Texas in 1979, Gamble was dealt back to the Yankees for Mickey Rivers, and Gamble reached the World Series again with New York in 1981.

“I will not only remember Oscar for his abilities on the field, but also for his great sense of humor and the way he treated me as a young player,” former Yankees teammate and current Miami manager Don Mattingly said in a text message.

In an era of constant turmoil dominated by Steinbrenner and manager Billy Martin, Gamble described the clubhouse by saying: “They don’t think it be like it is, but it do,” according to Dan Epstein’s book “Big Hair and Plastic Grass: A Funky Ride Through Baseball and America in the Swinging ‘70s.”

Drafted by the Chicago Cubs in 1968 after he was scouted by Buck O’Neil, Gamble made his big league debut at age 19 on Aug. 27, 1969, at Cincinnati’s Crosley Field. He pinch hit and walked at the start of the resumption of a doubleheader nightcap suspended after seven innings that June 15.

Gamble hit .225 over 24 games that year and was traded with pitcher Dick Selma to Philadelphia during the offseason for outfielder Johnny Callison. He had the last hit at Connie Mack Stadium in 1970 and after three seasons as a platoon player for the Phillies was dealt to Cleveland for outfielder Del Unser. He became a presence in the middle of the Indians’ batting order, hitting 54 home runs over three seasons.

His biggest postseason hits for the Yankees were a pair of tying home runs off Milwaukee’s Moose Haas in Games 1 and 5 of the 1981 AL Division Series. He hit .358 for the Rangers and Yankees in 1979 but had only 327 plate appearances, far fewer than needed to qualify for a batting title.

“His prodigious power, unique style and joy in wearing pinstripes made him a favorite of fans and of the Steinbrenner family,” the Yankees said in a statement.

Former Yankees teammate Lou Piniella thought back to times Gamble and Rivers ripped on each other in clubhouse banter, getting Catfish Hunter and even Jackson involved as other laughed.