Fate of the union: Pros & cons on Trump’s speech 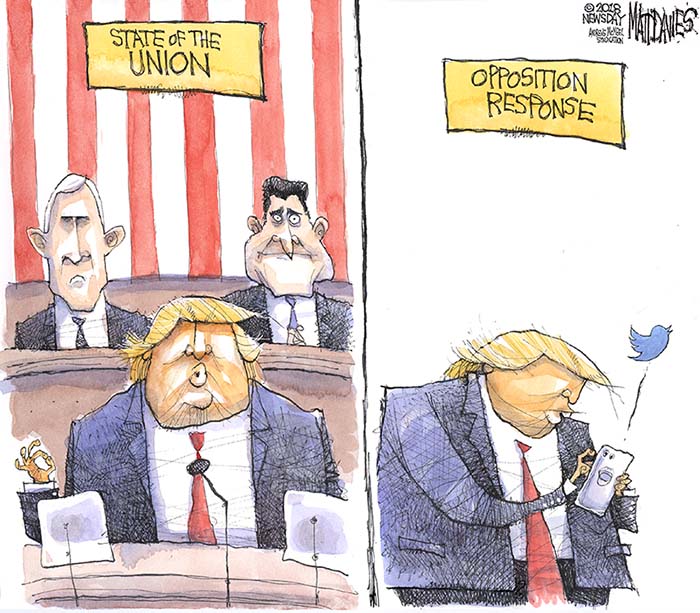 Nailed it: When President Donald Trump delivered his first State of the Union address Tuesday night, he faced a critical challenge. Despite a year of achievements — including historic tax and regulatory reform, confirmation of conservative judges, elimination of the Islamic State’s physical caliphate, repeal of the unpopular Obamacare individual mandate, a booming stock market, a growing economy and unemployment near 45-year lows — Trump’s approval rating on the eve of his address was just 38 percent.

A president this successful should not be this unpopular.

… His speech was moving. It was reasonable. It was bipartisan. And it worked. A CBS News-YouGov instant poll found that 75 percent of viewers approved of Trump’s speech while only 25 percent disapproved. Those who approved included 97 percent of Republicans, 72 percent of independents and even 43 percent of Democrats. Not bad for a president with only 38 percent approval.

In other words, Trump won over a lot of Americans with his State of the Union address — at least for the night. He created an opening. Let’s see what he does with it.

Low energy: Trump used to torture Jeb Bush with the phrase “low-energy” when the younger Bush seemed like the presidential heir apparent. But on Tuesday night, he seemed like a candidate for his own insult, strangely inanimate when it came to policy — which, of course, ought to be at the heart of any State of the Union address.

He woke up a little when he needed to enlarge the threat posed by nasty but regional actors — MS-13 and North Korea. He was half-asleep when mumbling about genuine global rivals — Russia, whose interference with our election was a frontal assault on democracy, or China.  …

After a first year in office, the ratings of the State of the Union usually go down dramatically. How will that affect a commander in chief who has attacked low ratings of others (the NFL, for example)? For most of the past year, he basked in the glow of constant attention, mistaking the world’s astonishment for approval. As reality sets in, the road will probably become steeper.

— Ted Widmer, who edited “American Speeches” for the Library of America

Advantage Trump: President Trump’s first State of the Union address set a new standard. For himself. If he lives up to that standard in future speeches, he may go far in changing his image from a blustering, ad-libbing “entertainer,” to someone who looks and sounds, shall I say it, more “presidential.”

The speech was well-crafted, delivered in a mostly low-key manner and timed perfectly to link themes with flesh-and-blood guests in the balcony. …

In what could be the most memorable line of the evening, President Trump countered the label used by the left to describe the children of immigrants whose parents broke the law to come to America. He said, “Americans are dreamers, too.”

Some of his strongest supporters might be irked that the president offered a “path to citizenship” for the children of undocumented immigrants. He put their number at 1.8 million. Conditions include a good education, ability to work and good moral character. After 12 years, he said, they can apply for citizenship. Democrats are likely to oppose that. They want their votes now.

… Rep. Joe Kennedy III (D-MA) delivered the Democratic response from Fall River, Massachusetts. … His youth made him appear as though he were delivering a college valedictorian speech. …

The president was optimistic and forward-looking, while Kennedy was mostly negative and looked backward. Advantage Trump. If he maintains the discipline he demonstrated Monday, Trump’s approval ratings and his chances of getting some of his agenda passed in Congress may quickly improve.

Placing poor bets: Like the crowing rooster who claims credit for the sunrise, Trump would like us to think that all good things are attributable to him. In fact, the average monthly jobs numbers (174,000 per month in 2017 vs. 187,000 per month in 2016) and the stock market were both stronger in 2016 than they were last year. …

Trump, desperate for praise, has hung his hat on those two misleading and unstable indicators — the stock market and job gains after the tax cuts (which were mostly aimed at corporations). … Markets go up and go down. A president who wants to tie his record to the stock market takes a big gamble. As a senior adviser in the Obama administration ruefully observed: “Rookie mistake.” …

The one group that plainly is happy and directly benefits from Trump’s tax cuts are GOP donors. Politico reports: …

“There are signs spending is beginning to pick up among the donor class — even before tax reform was done. House Republicans cashed their first big checks of the midterm election cycle from Charles Koch and his wife, Elizabeth, shortly before the final tax bill cleared Congress. The pair donated close to $1 million at the end of November, campaign finance records show.”

Somehow, I don’t think that is what voters had in mind when they heard “middle class tax cut.”

Encouraging the gang: MS-13 in the United States does not rule cities as it does in Central America (though Trump claimed it does). It has no official national leadership structure here and does not collude with corrupt politicians to win elections.

By misleadingly designating MS-13 as a national priority for the Justice Department and simultaneously stepping up anti-immigration rhetoric and raids of Latino communities, the administration is only encouraging the gang and others like it to flourish here. Massive crackdowns will populate juvenile detention centers and prisons in the United States. … The combined effects of Trump’s war on immigrants and street gangs will create communities that are even more alienated from law enforcement and more isolated from the institutions that can protect and improve the lives of the people there.

No blue wave: Voters in Middle America still want what Donald Trump is selling. And a bilingual speech from a well-lubricated trustafarian is unlikely to change their minds.

Northeastern suburbanites are certainly capable of knitting a lot of hats between now and November. But reaction to Tuesday’s speech suggests that no blue wave can reach beyond the coasts as long as Democrats refuse to listen to moderate voters.