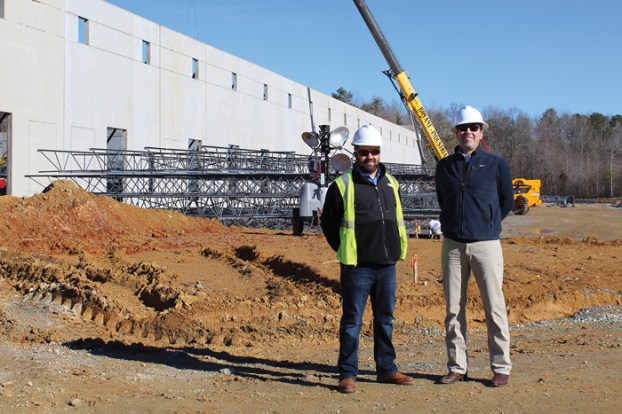 Andie Foley / Salisbury Post - Brian Lucas with Easter Creek Partners and Breck Dorton with Triad Commercial Properties stand outside a 150,000-square foot industrial speculative building in Granite Quarry. The building could welcome a new tenant as early as May.

Editorial: Spec building is another piece of the puzzle

“Not enough inventory” has long been one of the answers to the nagging question, “Why doesn’t Rowan County attract more jobs?” Industrial prospects reportedly wanted tangible proof in the form of spec buildings to show how quickly they could set up shop in Rowan. Thankfully, that vacuum is beginning to be filled.

Sunday’s Post reported the progress on a 150,000-square-foot industrial building that Easter Creek Partners of Davidson County is constructing off Chamandy Drive in the new Granite Industrial Park in Granite Quarry. Nearby are lots where other structures could be built to different specifications.

Triad Commercial Properties of Winston-Salem, which has a contract with Rowan County to find spec building developers, recruited Easter Creek. Triad’s Breck Dorton, who lives in Salisbury, has become one of the community’s biggest fans and advocates. He describes Salisbury as the epicenter between Atlanta and D.C. — something confirmed long ago when Southern Railway built Spencer Shops — as well as the midpoint between the Triad and Charlotte.

Spec buildings have proved successful in neighboring Cabarrus and Iredell. Those counties have the advantage of being closer to thriving Charlotte-Mecklenburg, but Rowan is near both Charlotte and the Triad. Gildan Yarns, which is near the spec building, has found this a good place to do business, and others can too.

The Easter Creek project is a private-public partnership. The county and Granite Quarry approved incentives two years ago for Easter Creek to build two spec buildings in Granite Industrial Park. Getting the first building off the ground has taken longer than expected, but the project is finally underway.

A spec building by itself is not going to dramatically boost the Rowan County economy overnight. Rather, the building is one piece of a big puzzle that county leaders are putting together to make Rowan County grow. Other pieces include successfully lobbying for an I-85 interchange at Old Beatty Ford Road and taking steps necessary to extend water and sewer lines both to that area and to Long Ferry Road. The county airport is undergoing expansion and upgrades. Etc.

Decreasing crime and drug addiction — and improving education outcomes — are critical pieces of the puzzle that will be much harder to put together than a spec building. Every part is important, though, and it’s good to see walls going up on this one. Visitors to Rowan County can see that this is no longer a community in stagnation, but a community working hard to move forward.

Great moments in past State of the Union addresses, real and fictional

By Ted Widmer Special to The Washington Post “From time to time,” the Constitution tells us, the president shall give... read more