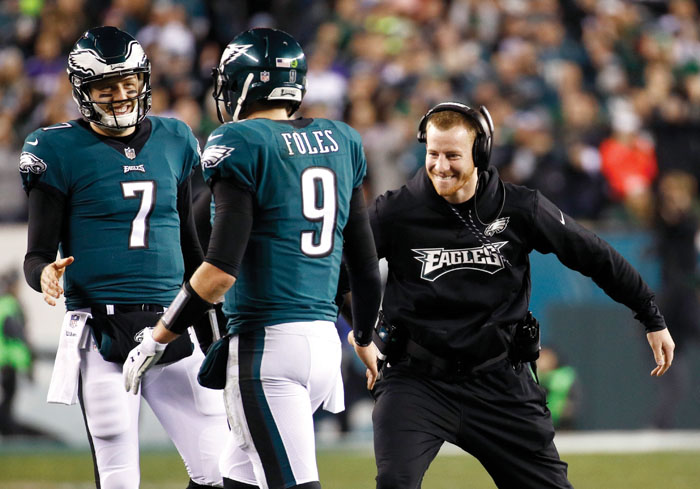 FILE - In this Sunday, Jan. 21, 2018, file photo, Philadelphia Eagles' Carson Wentz, right, congratulates Nick Foles (9) during the second half of the NFL football NFC championship game against the Minnesota Vikings in Philadelphia. Wentz, who is injured, watched both playoff games from the sideline, rooting hard for his teammates and enjoying their success without him. He'll be their No. 1 fan Sunday when they take on the New England Patriots and try to win the franchise's first NFL title since 1960. (AP Photo/Patrick Semansky, File)

BLOOMINGTON, Minn. (AP) — Carson Wentz made the rounds along Radio Row at last year’s Super Bowl and promised himself he’d be back for this one.

He’s here, but only as a cheerleader.

Wentz led the Philadelphia Eagles to a 10-2 start before he tore his left ACL and LCL in Week 14. Nick Foles replaced him, helped the Eagles clinch the NFC East and secure the No. 1 seed, and was spectacular in the conference championship game against Minnesota.

Wentz watched both playoff games from the sideline: the victory over the Falcons on crutches and the rout of the Vikings on a cane. He’s rooting hard for his teammates and enjoying their success without him. Wentz will be their No. 1 fan Sunday when they take on the New England Patriots and try to win the franchise’s first NFL title since 1960.

It’s not easy for any competitor to be forced to sit out.

“It’s just tough knowing that could be you,” said Wentz, who is walking without assistance now. “I had my sights set on this thing since I knew we weren’t making the playoffs last year. I had my sights set on playing in Minneapolis. It’s right down the road from home. Here we are. It just looks different for me.”

Wentz, from neighboring North Dakota, is more than just a spectator. He has been a major presence around the team following surgery, goes to quarterback meetings, watches film and supports Foles as much as possible.

“He’s been outstanding,” offensive coordinator Frank Reich said. “One of the greatest things about a person is when you see him celebrating somebody else’s success. To be happy for Nick who is at your position, who could potentially be stealing another person’s thunder, that’s the pretty cool thing about, of all the great things that he’s done this year, even more exemplifies the kind of leader that he is.”

Foles has said all the right things since the minute he stepped into the starting lineup. He’s close with Wentz and makes it a point to always give him credit for leading the Eagles from worst to first in the division.

“This is Carson’s team,” Foles said. “I’ve had to take it over, but Carson is a tremendous player. I think he’s the MVP of the league. He’s a huge reason why we’re in this position. It’s been awesome just being around him. He’s handled this thing amazingly and he continues to be such a great leader in our locker room. When we go through game film and we go through everything, he’s an extremely intelligent player, so I listen to everything that he says.”

Wentz, the No. 2 pick in the 2016 draft, started every game his rookie season when the Eagles went 7-9. He took a giant leap as a sophomore, tossing 33 touchdowns and seven interceptions in 13 games.

Wentz was voted to the Pro Bowl and is a contender for the NFL MVP award that will be announced Saturday night.

“He’s done such an amazing job in his two years in the NFL of continuing to create this atmosphere and obviously going out there making electric plays, but really just making everyone believe,” Foles said. “That hasn’t changed though he’s injured. He’s still around, and I love having him around.”

While Foles stood center stage with Tom Brady at media night, Wentz sat in the stands at the hockey arena and spoke to reporters for about 25 minutes. He has relied on his strong faith to get him through the disappointment.

“When it comes to an injury like this, the season we were having, the season I was having personally and it gets taken away, it’s just a chance to practice what I preach and that I play for (God) and it’s not for myself,” Wentz said. “It’s taught me a lot so far. He closed this door on this season for me but I know he’s going to open many other doors and he’s going to use me.”

If Foles leads the Eagles to victory over the Patriots , there still won’t be a quarterback controversy in Philadelphia. Foles is signed through next season and provides insurance if Wentz isn’t ready to start the season opener. Having Foles on the roster allows Philadelphia the luxury of giving Wentz all the time he needs to get his knee right.

“Two years ago, the plan was to acquire a quarterback,” coach Doug Pederson said. “That was our first plan, and we were able to do that in Carson. We do have the quarterback of the future for the Eagles, obviously.”