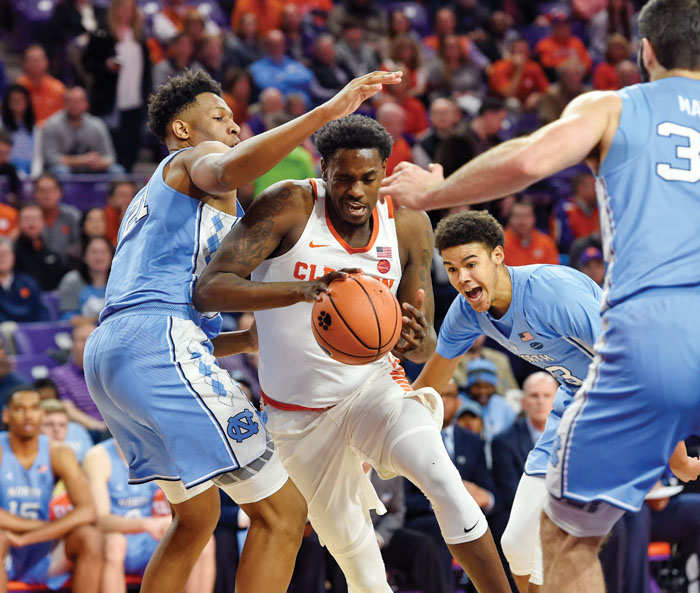 CLEMSON (AP) — Gabe DeVoe had one thought when the game ended and Clemson fans poured onto the court to celebrate the Tigers’ first win over North Carolina in eight years.

“I was just trying to get out of the way,” DeVoe said with a smile after Clemson’s 82-78 victory Tuesday night.

Forgive DeVoe and the rest of the 20th-ranked Tigers if they don’t know how to react after beating North Carolina. After all, it happens so rarely.

“This is my first time beating North Carolina,” said DeVoe, a senior from Shelby, North Carolina. “So it meant a little bit more.”

Marcquise Reed had 20 points, including the go-ahead 3-pointer after the Tigers blew a 16-point lead

That’s when Reed struck with his 3 from the left side to put Clemson ahead for good. Reed rebounded Johnson’s miss moments later, and Elijah Thomas made an inside shot to go up 79-74.

“I think he made the biggest play,” North Carolina coach Roy Williams said of Reed.

North Carolina has its first three-game losing streak since the 2013-14 season.

Clemson fans rushed the court after the school’s second win over North Carolina since March 2004.

DeVoe had 17 points, including five of Clemson’s season high 15 3-pointers.

“We were shooting the ball with confidence,” he said. “Teammates trusted in me, coaches believed in me.”

Clemson had everyone believing by the end, with students — as they do each game with their ACC champion football team — flooding the playing surface to jump around with the team.

Johnson had a career-high 32 points while Berry had 27, 19 of those coming in the second half.

Clemson coach Brad Brownell was anxious down the stretch during North Carolina’s comeback, but was proud to see Reed and his teammates hang tough in a difficult situation.

“We’ve got multiple playmakers,” he said. “That’s something different from past teams.”

Clemson improved to 5-0 at home in the ACC this season.

The Tar Heels played almost all of the game without starting forward Theo Pinson, who strained his left shoulder when he crashed hard to the court going for a rebound. Williams said Pinson would need an MRI to assess the extent of the injury. He had no idea when Pinson might return.

North Carolina: The Tar Heels have a serious problem at the point if Pinson needs time to recover from a left shoulder strain. North Carolina is already without an injured Seventh Woods and suspended Jalek Felton. Pinson was the lone experienced, reliable option to run things when Berry needs a breather. Woods has been sidelined since December with a foot injury. Pinson hurt himself early against Clemson when he took a hard foul trying to get a rebound. Andrew Platek, a freshman who’s averaged eight minutes a game this season, played 11 minutes in the first half.

Clemson: The Tigers also needs ways to overcome their sudden lack of depth at forward. Starter Donte Grantham was lost for the season with a torn ACL against Notre Dame on Jan. 20. This past Sunday, Mark Donnal suffered a concussion and missed the contest with North Carolina. Brownell was unsure if Donnal would be available for Saturday. Donnal had been watching from the sidelines but needed to get off the bench and head to the locker room.

North Carolina will need to find a couple of options to add some scoring punch if the defending national champions hope to get back in the ACC race. Johnson and Berry combined for 59 of their 78 points. Johnson and Berry shot 20 of 34 from the field, the rest of the Tar Heels combined to go 8 of 28.

“Joel and Cam were our offense because we didn’t get much from anybody else,” Williams said.

Clemson center Elijah Thomas didn’t have the impact on offense he hoped, finishing just 3 of 11 with 11 points. But he tied his career best with six blocked shots, and Williams believed his presence down low played a big factor on the Tar Heels’ shooting. When asked about Thomas’ play, teammate DeVoe joked, “That’s huge when he’s not fouling.” Thomas has struggled to avoid foul trouble much of his Tiger career.