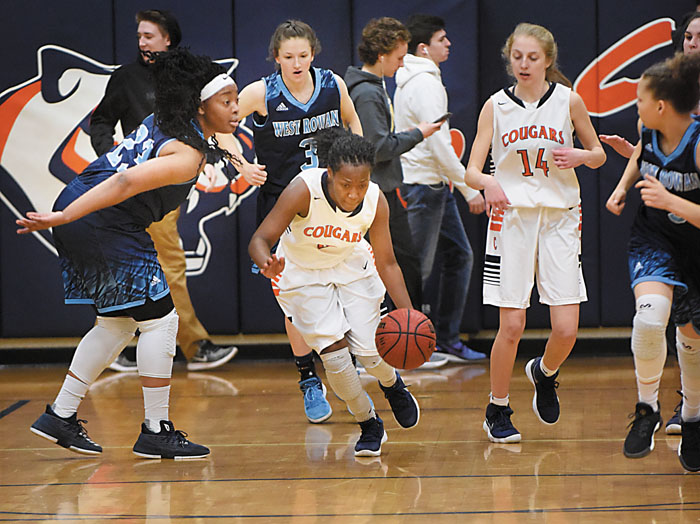 CHINA GROVE — With just under two minutes left to play Wednesday night, things did not look good for the Carson girls’ basketball team.

Visiting West Rowan was leading, 63-58, and had the momentum in the North Piedmont Conference showdown. But Cougars’ senior guard Olivia Gabriel then took matters into her own hands with back-to-back 3-point bombs that put Carson ahead and sparked a razor thin 69-65 win.

Carson coach Brooke Stouder should have been ecstatic, but instead she wishes her team had been more patient with the ball. “When you take a lot of threes, that leads to long rebounds and transition baskets the other way,” she said. “We have got to be smarter offensively and work for good shots.”

Turns out the 3-pointer was a good weapon for Carson in the game as the Cougars drained 11 of them, including the two key ones at the end by Gabriel. But the senior knew exactly what her coach meant about being patient on offense.

“Coach likes us to attack and she likes the high percentage shots,” Gabriel said, with a chuckle. “But they (West) were packing the middle trying to force us to shoot threes. It’s a shot I know I can hit and I was able to knock them down.”

The contest was tight throughout the second half with three ties and seven lead changes, as the teams swapped one clutch basket after another. Heading to the final quarter, the score was tied at 47-47 and stayed within a point until 3:50 remained.

West made their move with a Mary Sobataka 3-pointer and a 58-56 lead. Then sophomore center Abigail Wilson added a layup for a four-point margin, capping off her dominating 18-point, 15-rebound night.

With two minutes left, Sobataka nailed another 3-pointer to give West a 63-58 margin that looked to be golden. But in a matter of nine seconds, Gabriel gave her team the lead right back with a 3-ball from the top of the key, then another quick one off a feed from Taylor Conrad, after a steal. When Colbie Perry stole another West pass and laid it in, Carson led, 66-63, with 1:26 remaining.

West cut the margin to 66-65, on a pair of Egypt Alexander free throws with 35 seconds left. But Carson pulled it out with a Gabriel free throw, giving her a game-high 26 points for the night, and a McKenzie Gadson snow-bird layup at the buzzer.

“It’s a great win … any win in the conference at this time is a great win,” Stouder said. “I thought we battled to the very end and never gave up. Our press actually helped us get back ahead late in the game.”

The Cougars’ pressure defense was especially effective in the first half as they scored 25 points in the opening quarter, thanks to a lot of deflected passes and takeaways. Carson went on a 13-0 run and led by as many as 13 points, before settling for a 34-37 halftime lead.

The Falcons quickly battled back into the game with a 9-0 run, right out of the gate, in the third quarter, as guard Taylor Poole hit a pair of jumpers and Wilson scored twice inside during the run. The comeback was complete, midway in the quarter, as West went ahead, 36-34, setting the stage for the nail-biting finish down the stretch.

“We just came out and took care of the ball better,” Falcons’ coach Ashley Poole said of her team’s strong second half. “We started being patient on offense and got more help on rebounding. Our girls played well and fought their way back.”

The game had serious implications in the NPC girls race. West (16-5, 5-2 NPC) came in tied for first with North Iredell while Carson (18-3, 5-2) is now tied for second with the Falcons. Three games remain in the regular season, with some key battles looming, as Carson travels to Statesville Friday night then gets a return match at West next Tuesday. Meanwhile, West has a shot at league leader North Iredell on Friday.

“We are still very much in the hunt,” Poole said of her Falcons.

Following Gabriel in the scoring for Carson was Gadson with a strong inside game of  17 points and nine rebounds. Freshman guard Perry led the 3-pointer parade with 14 points, including four baskets beyond the arc, while guard Maci Cooper hit three treys for nine points.

Wilson’s double-double topped the Falcons, followed by Alexander with 15, including 7-of-11 from the foul line. Poole hit a trio of threes and scored 13 points.

NOTES: Gabriel came into the game needing just four points to reach the 1,500-point mark for her career. The school’s all-time leading girls’ scorer reached the milestone in the opening minutes with five quick points. Her 26 points gives her 1,522 career points with possibly eight or more games left in her senior season.

Gabriel was aware of the career mark but was not focusing on it. “I was just trying to focus on getting the win, because this game was a lot closer than it should have been,” she said. “We came out with a big win and that is what really matters.”