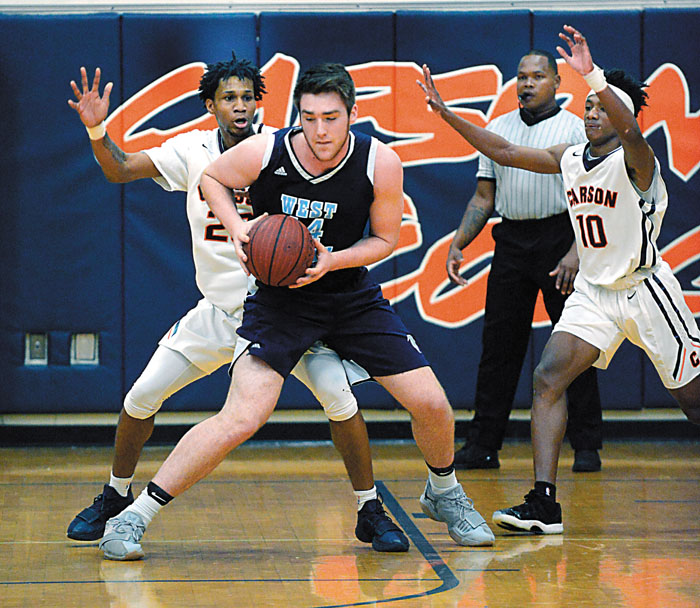 Wayne Hinshaw/for the Salisbury Post ... West Rowan’s Caleb Mauldin (44) is guarded by Carson’s Jamarius Hairston 23, as Jailen Williams comes in to help. Mauldin scored 32 points for the Falcons, but Carson won the game, 73-55.

CHINA GROVE — As the traffic thins in the North Piedmont Conference boys basketball race, Carson has checked its mirrors, made a lane change and positioned itself for a run at the league title.

The first-place Cougars finished January by finishing off West Rowan on Wednesday, when they knocked down 11 3-pointers in a 73-55 victory.

“The grind of January is over,” coach Brian Perry said, after Carson (18-2, 6-1) improved to 9-0 at home and won its third straight game. “I feel really good about where we are. We had five guys in double figures again — and that’s when we’re best. It means we’re moving the ball around and making our shots.”

“I heard Coach Perry telling them not to front me,” Mauldin said, after the Falcons dropped their second straight conference decision. “I assumed they wanted me to shoot over them, so I took what I could.”

West’s 6-foot-8 star earned his stripes. He was master of his domain, muscling his way around, through and over the Cougars with signature wrecking-ball force. Mauldin had 12 points in the second quarter and 17 in the opening half, the last two on a driving layup through the lane that brought the guests to within 38-31 at the break.

“He posted us hard,” Hairston said. “We tried to double-team and triple-team him and had the guards double down whenever he got in the post. But he was such a handful.”

So was Hairston, who moved within three points of 1,500 for his career. He opened the second half by measuring a long, ally-oop pass from White and scoring on a declarative, circle-the-bases slam.

“It’s in our playbook,” he said. “(Perry) called it at halftime and said we were going to run it to start the third quarter. Owen threw a perfect pass and I just went up and got it.”

Perry, who had a post-game smile pasted to his face, was pleased with the result. “We were hoping that would work and give us a little bit of energy,” he said. “It felt like it did.”

It must have. The Cougars used an 8-0 spree — capped by Hairston’s 3-ball from the right corner — to go up, 51-34, just two minutes into the third period. Their lead ballooned to 56-37 following White’s fourth 3-pointer and Prugh’s layup midway through the quarter.

“It’s all because we played hard on defense,” Prugh noted. “When we get stops and have good defensive possessions, it gets us into a rhythm on offense.”

Carson’s rhythm gave West the blues. The Falcons never got closer than 14 points down — and that came following Payne Stolsworth’s put-back with 5:14 remaining.

“We fought them hard,” Mauldin said. “We were prepared and locked in, but Carson’s a heck of a team. They were just on fire tonight.”

Afterward, West coach Mike Gurley tried to say all the right things. “We had some breakdowns, but we’ll get better,” he offered. “If we’re going to make a run in February, we’ll have to.”

So here comes February — the month that never twists the truth. Carson begins its home stretch with a heavyweight match at Statesville on Friday. The Falcons host last-place North Iredell on Friday.

“February is where a lot of teams are showcasing where they’re going to be in the playoffs,” said Hairston. “It’s where you show people what you’re made of.”

NOTES: West played without defensive specialists Martavio Rankin and Jay Joseph. Rankin served the third game of a four-game suspension and Joseph was ill. … Carson beat second-place Statesville (11-9, 5-2 NPC) by 14 points on Jan. 5. West routed North Iredell, 65-29, the same night. … This marked Carson’s second win over West this season. It prevailed, 70-52, in the opening round of the Christmas tournament. The teams meet again next Tuesday in Mount Ulla.