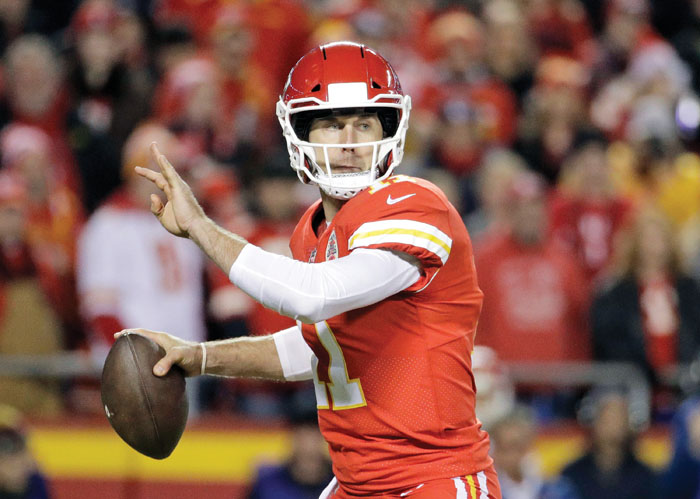 FILE - In this Saturday, Dec. 16, 2017 file photo, Kansas City Chiefs quarterback Alex Smith (11) looks for a receiver during the first half of an NFL football game against the Los Angeles Chargers in Kansas City, Mo. Two people with direct knowledge of the trade say the Kansas City Chiefs have agreed to deal quarterback Alex Smith to the Washington Redskins. The people spoke to The Associated Press on condition of anonymity because it can’t be completed until the start of the new league year in March. (AP Photo/Charlie Riedel)

By STEPHEN WHYNO, AP Sports Writer
WASHINGTON (AP) — Kansas City has agreed to trade quarterback Alex Smith to Washington, a move that spells the end of Kirk Cousins’ time with the Redskins and hands the Chiefs’ job to Patrick Mahomes.
Two people with direct knowledge of the deal confirmed the move to The Associated Press on Tuesday night on condition of anonymity because the transaction can’t be completed until the start of the new league year in March. One person told the AP the Redskins had agreed to a four-year extension with Smith, who had one year left on his contract.
Smith, who turns 34 in May, spent the past five seasons with the Chiefs, leading them to the playoffs four times while throwing for 102 touchdowns and 33 interceptions. He carries a $17 million salary-cap hit for 2018.
Kansas City saves cap space and can turn to Mahomes, the 10th pick in last year’s draft out of Texas Tech, as its new starter.
Smith becomes Washington’s new franchise quarterback after throwing for 31,888 yards and 183 touchdowns in 12 NFL seasons with the San Francisco 49ers and Chiefs.
Smith is “one of the best competitors and teammates I’ve ever been around,” Chiefs tight end Travis Kelce posted on Twitter. “Someone who I owe a lot of my success to, and a guy that’s been a class act through all the ups n downs.”
The Redskins acquired Smith and signed him to the kind of long-term deal they balked at with Cousins, who became the first QB to play back-to-back seasons on the franchise tag. Cousins can become a free agent next month at age 29.
“Nothing really surprises me anymore,” Redskins tight end Niles Paul tweeted . Former Redskins QB Robert Griffin III tweeted : “Some how…Some way…they will blame this on me. No doubt.”
Cousins, drafted by the Redskins in the fourth round out of Michigan State in 2012 — the same year they traded up to Griffin with the No 2 pick — likely leaves Washington with the fourth-most passing yards in franchise history, more than 16,000.
Under coach Jay Gruden, Cousins became the first Redskins QB to start all 16 games for three consecutive seasons. He threw for at least 4,000 yards in each, while totaling 81 touchdowns and 36 interceptions. But Washington only played in one playoff game during that span, going 9-7, 8-7-1 and, most recently, 7-9 in Cousins’ time as a starter.
Cousins has been the biggest question hovering over Washington’s offseason — and, indeed, hovering over the whole organization for a couple of years as the team failed to sign him to a long-term deal.
According to ESPN, Washington is sending a third-round draft pick and cornerback Kendall Fuller to Kansas City in the trade, which cannot be finalized until March 14. The Kansas City Star first reported the deal.
This is the second time a team coached by Andy Reid has traded a 33-year-old QB to the Redskins. Reid’s Philadelphia Eagles dealt Donovan McNabb to Washington in 2010 for second- and third-round picks.
___
AP Sports Writer Dave Skretta and Pro Football Writer Howard Fendrich contributed to this report.
___
For more NFL coverage: http://www.pro32.ap.org and http://www.twitter.com/AP_NFL