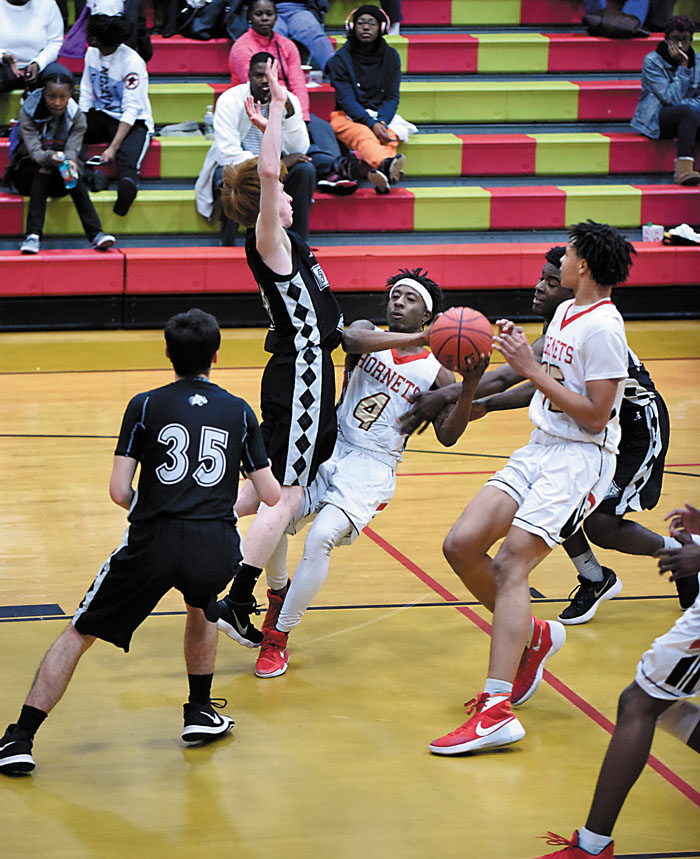 Wayne Hinshaw/for the Salisbury Post ... Salisbury’s Trell Baker (4) is defended by Ledford’s Ethan Reece as he looks to pass to a teammate near the basket. The Hornets won Tuesday night’s game at Salisbury’s gym, 60-51.

SALISBURY — Hold those calls regarding the CCC boys basketball regular-season championship. We have a winner.

Salisbury used Tuesday night’s 60-51 victory against visiting Ledford to secure the title and a No. 1 seed in the upcoming conference tournament.

“We’re getting better, man,” coach Bryan Withers said after the Hornets (18-2, 14-1) collected their sixth straight win, improved to 8-0 at home and claimed their first conference crown since 2011. “We’re not playing like we’re capable of playing, but at the same time we’re learning to grind.”

SHS received seven first-quarter points from senior Elijah Moss and raced to a 22-9 lead. Its widest margin was 34-16 following Cameron Gill’s layup with 3:10 remaining in the first half.

“We got down in the beginning because we weren’t executing on defense,” Ledford coach Jonathan Leonard said after the Panthers (12-8 overall) fell to 9-6 in league play. “And on offense we would turn the ball over and take the quick shot. Salisbury was getting like two or three possessions for every one we got.”

That changed late in the third quarter, when Ledford closed within 40-34 on Chad Dorrill’s leaner-plus-one. Salisbury responded with an 8-2 fourth-quarter run and took a 10-point lead when Jaquan Davis hit a free throw with 2:49 remaining.

“(Ledford) is pretty good,” Withers said. “They beat Thomasville twice — and that’s the team that beat us. So you know they can play. The biggest thing for us is staying focused. You play who’s here. Some are going to be out, some are gonna be sick. The next man up always has to be ready.”